A Year On The Road

A year after being on the road and attending car shows it comes to that time of year that every classic car owner dreads. The UK requires by law a car that is the years old and any car up to 1960 must pass a road worthy test, or M.O.T (Ministry Of Transport) test. It can fail for a gas cap not fitting correctly, a bulb not working, rust or “drivers view of the road” what ever that means etc. December last year my car passed her first test since the restoration. As it was due again I had a word with Adam to see when he could book me in for the M.O.T. Saturday. I drove down to the Mustang Maniac yard to catch up with the guys to fill in time before my appointment. Time flew by and was given a map on how to get there along with verbal directions. The guys know I’m seriously diabolical when it comes to directions. I set off and had the map on the seat next to me, simple enough. I turned off too soon and turned around to get back on the correct road again. Yep, I got lost even with a hand drawn map. The best of it was that Lance from Mustang Maniac had spotted me, what are the chances of that? With my luck it’s every chance. Needless to say that my WhatsApp group for Mustang Maniac went mental and I knew exactly what was waiting for me. I eventually found the place after thirty mins that should have taken fifteen. I pulled up to the testing station and took a pic of the car in the reflection which matched the garage paint job. I was right, my WhatsApp had a torrent of grief waiting for me, showing no sympathy what so ever for little detour. 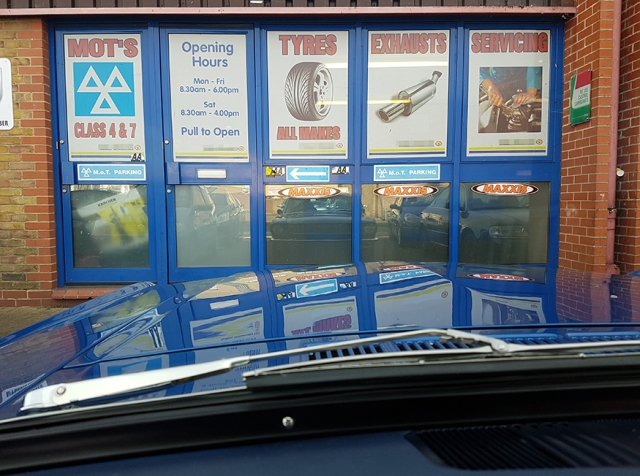 The guys at the test center took my keys and I watched my car disappear into the workshop. A short while later according to the clock, but seemed like hours in waiting time passed by when the guys came back to the desk. They smiled and gave me my keys back with, “she’s passed with flying colours.” My heart rate now slowed, that was promptly replaced with a proud smile. I paid the bill, thanked the guys and left with my all important certificate. The test results are updated on the goverment system instantly, so the paper doesn’t mean anything except something for your records. The drive home was quicker and much more straight forward, I think. I arrived back at the yard to yet more grief asking me how I got lost. I blamed the map but they weren’t having any of it for some reason.

I had asked Adam if I could put my car up on ramps to put a spanner over all the important nuts and bolts ro make sure everything was where it should be when I come back from the M.OT. Adam kindly said yes and he had already moved a car of the ramp ready for me while I was out. He added “I will be there in a minute to check her over with you.” 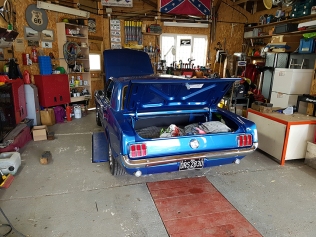 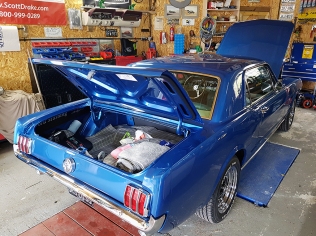 The car was lifted up for me to get underneath and inspect. At this point Adam duly arrived back to see that everything was all OK. He grabbed another torch and went over everything looking for signs of movement that the MOT itself wouldn’t pick up. The thumbs up was given by Adam who told me to tighten the rear axle to shock plate clamps. They looked fine to me, but check them I did. 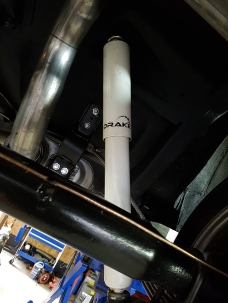 He was right, they needed a turn or so just to take up the stretch in the bolts. After that I got out some white cleaning cloths so I could clean all my suspension. There was a little messy water stain on the left side due to me over filling the radiator, the overflow did its job and dumped some water.

Gibbs Brand Lubricant was the choice of the day and everything got coated that needed to be coated. I polished the white prop shaft that still looked white after a year. 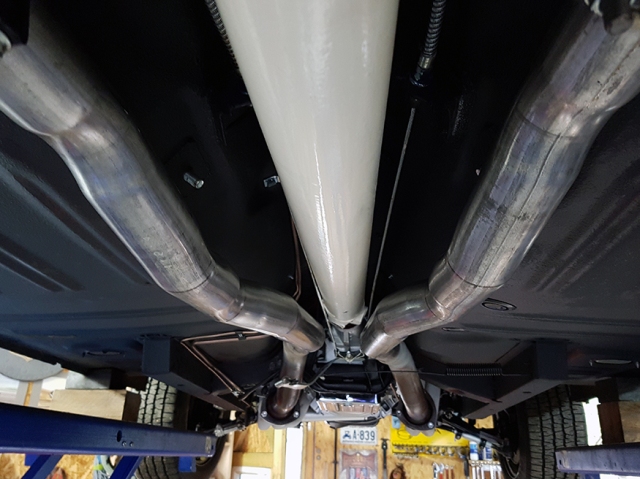 Cleaning my Mustang is therapeutic and enjoyable and in no way a chore. Yet cleaning the other daily driver cars is not quite the same somehow. Now that my car was cleaned to my standards underneath as it was much easier to clean while up in the air. I could see just how filthy the car was by the state of the two white cloths I had used. 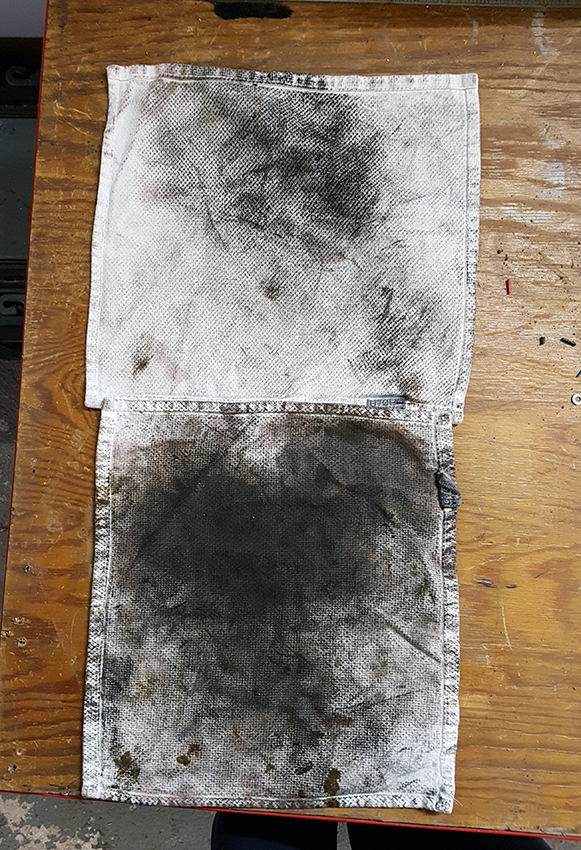 OK, it wasn’t that dirty at all which made me happy. The trouble was I had to drive it home again, the weather wasn’t looking to good, so I said my thanks and goodbyes to the guys. The master plan was to get home before the rain. The drive home took a little over the hour and I managed to get the car home before the rain, which started about an hour or so after the car was safely in the garage.

The trouble is what do you buy your car for Christmas? I want to get some more cleaning products ready for the show season 2017. For the first time in years I haven’t asked for anything from my Snap On rep. I now have most of the tools that I need and bought them as I went along. If I need tools that I haven’t got then I suspect I will be in some sort of big mechanical trouble. I have got my eye on a few stainless steel clips for the rubber hoses. Lets see what Santa brings.

Wishing you and all my readers and followers a Happy Christmas and great New Year.

I'm just a man with a Classic 1966 Ford Mustang Coupe and an ever increasing collection of car detailing products to keep it clean. When I first started this blog this is what I wrote: "I had bought a project car that had been neglected, set fire to, rusted and abused. As a result of all that the car needed a bare metal strip down, a nut and bolt restoration." Four and a half years later the car was completed, on the road and shown at the UK's premier Classic Car Show, everything that was done to that car is documented here. I now have the privilege to drive one of America's most recognised cars and a true Icon, the Ford Mustang. I'm still sane after the blood, sweat and tears, so would I do it again? Oh yes!
View all posts by One man and his Mustang →
This entry was posted in Car, car shows and tagged gibbs brand, M.O.T., Mustang, Mustang Maniac, One man and his Mustang. Bookmark the permalink.

12 Responses to A Year On The Road