A few weeks ago I was at the Cars By The Lake Car Show near me and it was a wonderfully warm day. During that show I wandered around and spotted a newish car club called ‘Classic Car Club Bury St Edmunds’.  I was speaking to the guys there where I asked about the events they hold. They told me that they were having a little ‘display’ more than show as such of a dozen cars or so on the Saturday (yesterday) and the Sunday at the local very popular shopping centre called the ‘Arc’ in the middle of Bury St Edmunds. This intrigued me and said I was interested, but I wasn’t a member of the club. I gave them my details if they wanted an extra car if they were short for any reason.

It turned out that last week I got a couple of very nice emails asking if I wanted to attend on the Saturday, of course I said yes. The display was to also raise funds for a charity MDF  which is for mental health. This was funded by agreeing to have photo’s taken in the cars and a ride for thirty minutes in a car from the selection being offered for minimum donation, any profits from the day also going to the good cause.

The agreement was to arrive at the Shopping Centre at quarter to eight in the morning where we would be escorted through to the centre of the centre two cars at a time. We got parked up and had a few adjustments of cars to make it all look good. I took this photo from the building opposite the club gazebo which had an upstairs and balcony.

There was a great variation of cars that turned up as expected. No sooner had the cars been parked up when the very early birds and workers passed through while looking at the cars.

We had a Studebaker and a Westfield.

Then there was my Mustang, a rare Hurtu and a Dodge Fluid Drive.

There was a BMW, Daimler Dart a popular car with the Police in the day, 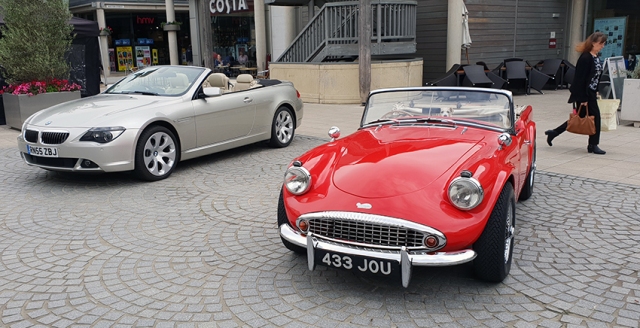 An Ambulance that was being converted into a camper van, Bugatti ‘Teal’ and one of only two remaining 1914 Humber in the world, the other is on New Zealand.

The Arc shopping centre had some rather large lettering that said ‘Love Cars’ which is being brought out for this event that happens one weekend a year in the centre.

At around lunch time we were asked if we wanted to start our cars up for a little rev up session so people could eat their food with a nice smell of spent petrol. Each of us was asked to start-up in turn, when my turn came the event was  filmed by the Arc media team who posted it on the Facebook page straight away along with the other v8 Daimler Dart. The best bit is to watch the little kiddies in the background having their ears covered!

Turn up the volume.

The video didn’t do the noise justice as the sound echoed brilliantly around the courtyard, and I think that I filled Monsoon shop behind me with some freshly burnt fumes. 🙂

The day was so busy I did not even get to sit down at all, apart from starting my car up. That’s eight till five thirty when we were then escorted out again, three at a time now.

My car had a constant stream of people around it and lots and lots of questions too. I had a sore throat at the end of the day from talking to much. The last time I had that was when I exhibited at the Birmingham NEC Car show. 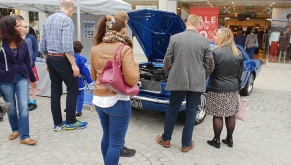 I think the men loved it while the wives and girlfriends went and done what they needed to do.

Perhaps the star of the show was Candy, a lovely little girl who sat in the car and took all the attention she could get until she went home early afternoon just around the corner.

The weather was not great but a few spots of rain made me nervous for the downpour that didn’t happen. But I still cleaned the car again when I got home.

All in all a great day and something very different and I enjoyed it immensely. Well done to the club for organising it, oh I’m now also a member. 😉

I'm just a man with a Classic 1966 Ford Mustang Coupe and a collection of tools that just keeps getting bigger in order that I could do the job right. When I first started this blog this is what I wrote: "I had bought a project car, that had been neglected, set fire to, rusted and abused. As a result of that she needed a bare metal strip down, a nut and bolt restoration." Four and a half years later the car was completed, on the road and shown at the UK's premier Classic Car Show, everything that was done to that car is documented here. I now have the privilege to drive one of America's most recognised cars and a true Icon, the Ford Mustang. I'm still sane after the blood, sweat and tears, so would I do it again? Oh yes!
View all posts by One man and his Mustang →
Video | This entry was posted in car shows, Driving my car and tagged Arc Shopping Centre, car show, classic cars, local press, Mustang, One man and his Mustang, revving up. Bookmark the permalink.