Last weekend a Classic Car Show at Stonham Barns was pretty much the last car show for the year officially for me, unless I go on a winter organised cruise that is, providing it doesn’t rain of course. It seemed fitting to end this year’s season with a show just for American Cars. There was a nice mixture of classic, not so new and new with some real beauties on display. I arrived about nine in the morning I meet up with Yogi from Mustang Manic who had made a long trip for this show. We were shown into the main arena and parked next to each other, me with my ’66 and Yogi with his red rocket ’69 Mach1 that will run ten seconds down a quarter-mile!

After a quick buff over to remove the dusty road residue, we both found ourselves ‘broken down’ (in joke) with our hoods up. Yogi’s beast got a lot of attention for all the trick bits he has under the hood. Also it’s not often that he;

2) he cleans his car

On the Mustang Maniac blog last weekend they had a rare photo of him cleaning it so I have borrowed it with their permission I might add, just to show that miracles do happen!

The other cars that followed us in the gates were parked around the main area until the area was pretty much full, then they filled the outside areas of the field.

My overheard quote of the day came from a woman who looked at my car and said to the guy walking next to her; “Look at the seats in that car, they are disgusting, I don’t like them, they should be taken out.”

To that woman; you came over to my car to look at it, if you don’t like it – don’t look at it, so kindly keep your opinions to yourself! Far from being upset by the comment, I just smiled to myself and thought; if I gave her the keys to my car, she would have happily driven it away sitting on those ‘disgusting’ seats. 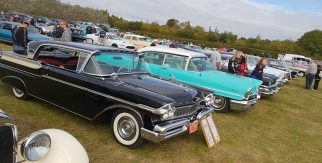 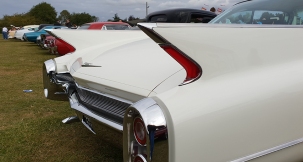 Throughout the day there was ‘Uncle Sam’ taking selfies with lots of people and a beautiful bald eagle how much more American do you want to get? 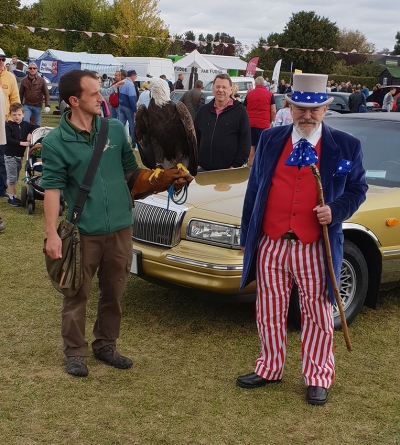 There was the odd car for sale, this one for £8,000, a little bit to much of a project for me at that sort of money.

It was a good day and I even bought a couple of little bits for my memorabilia collection too. Great cars, great company and a great day.

I'm just a man with a Classic 1966 Ford Mustang Coupe and an ever increasing collection of car detailing products to keep it clean. When I first started this blog this is what I wrote: "I had bought a project car that had been neglected, set fire to, rusted and abused. As a result of all that the car needed a bare metal strip down, a nut and bolt restoration." Four and a half years later the car was completed, on the road and shown at the UK's premier Classic Car Show, everything that was done to that car is documented here. I now have the privilege to drive one of America's most recognised cars and a true Icon, the Ford Mustang. I'm still sane after the blood, sweat and tears, so would I do it again? Oh yes!
View all posts by One man and his Mustang →
This entry was posted in car shows, Photo's and tagged Americana, car shows, classic car show, Mach1, Mustang, Mustang Maniac, One man and his Mustang, Stonham Barns. Bookmark the permalink.

4 Responses to Americana Finishes The Season