Total £90 for the pair from Mustang Maniac 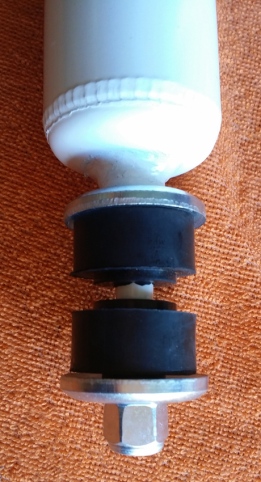 Correct mounting of the bushes

It is known among some circles to cheat on the ride stance of the classic Mustangs. This can be because the leaf springs are a little saggy at the back and sits too low, or they just want to increase the rear ride height. I’m not sure what or why the reason I had adjustable gas shocks to the rear of my car was but they were coming off. To start with the right rear had no pipe work to the shock and the left hand side was not even bolted in place properly at the bottom mount. The result was due to the seized and non working left side shock the car sat a little lop-sided. Lets give the bloke the benefit of the doubt, and say he wanted to adjust the cars ride for street racing. The shocks were knackered and needed replacing regardless of the reason. You should not use adjustable gas shocks to lift the car up for its stance. The correct way is to replace the leaf springs or by adding a spacer to the leaf mounts if the springs are OK. The reason being is that the weight of the car will then sit on the top of the shocks mounts, so if any weakness is there and you go over a heavy bump or similar, the shocks will punch their way through the mounting and potentially cause some major handling issues as the shocks will not be attached to anything. At speed that is the last thing you need. Lets face it, standard Mustangs with stock running gear were not the best handling as it was. There are many improvements that can be made to the handling these days of course. One of them being a decent set of shocks to keep the wheels and axle firmly on the floor.

The reason for my replacement is to get rid of the dodgy gas adjustable shocks and get the car to sit correctly. If the car needs new springs then so be it. I wont be able to tell until it sits on them fully. 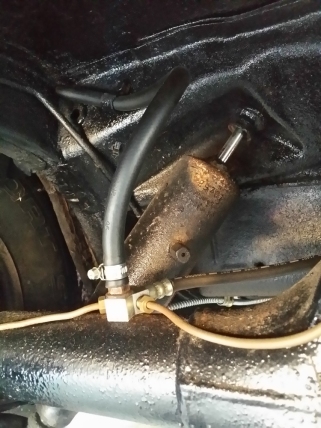 old shock not even tightened up 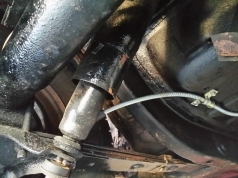 My thoughts were to start on the right hand side to see how things were going to go. To start with you have to remove the rear seat back to gain access to the top of the shock mounting. There is a black rubber grommet that sits over a fairly large hole to allow the top nuts to be removed. 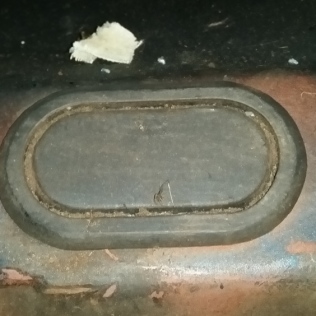 A deep 9/16ths socket is required as the top of the shock sticks up above the nut. The nuts were given a good dose of the Gibbs Brand releasing agent first to give me a fighting chance. I started at the top as there is little room to manoeuvre. So as the nut is released the fact it has embedded itself in place should stop the shock turning. Unscrew the nuts on each side and remove the top metal plate and the rubber bushing underneath the plate. This would allow any movement from below of the shock to be unhindered. 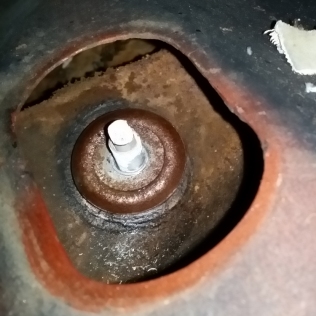 Getting under the car at the rear was a squeeze. I could have jacked up the car to give me more room if I needed it but I was comfortable with my position under the car. The shocks at the bottom both got a good squirt of Gibbs on the thread and the nuts to give me a fighting chance here as well. The right concerned me; at the ends of the shocks stem both top and bottom each has a small flat by the thread end to allow you to hold the shock still while undoing or attaching the nut. But it looks like somebody has had a go at trying to remove the shock as the flats on the right had been well and truly rounded off. This was now going to be fun, Not. I cleaned the thread as best as I could to allow the nut to turn. The rear was held tight by some self-adjusting mole grips that I cranked up the bite to maximum I could while still being able to shut the handles. They had a massive grip at this point. I used my long-handled Snap-On Flank Drive spanner to get a grip on the nut and I managed to crack the nut free and start to undo the nut. I managed to get about half an inch down from the bottom underside mounting plate when the process stopped. The mole grips were struggling to hang onto the bottom of the shock with the leverage I was applying. When I released the grips there was bits of metal in the jaws where it had started to chew the metal away. Quite impressive really. This was a sign that this was now a dead-end job and damage limitation was required. The fact the spanner was now twisting the entire shock was a good thing now. I got my junior hacksaw with a fresh blade and started to cut between the rubber bushing and the nut. The cutting was through half way, turn and cut a bit more etc.

You can just see the rounded flats at the bottom of the stem. 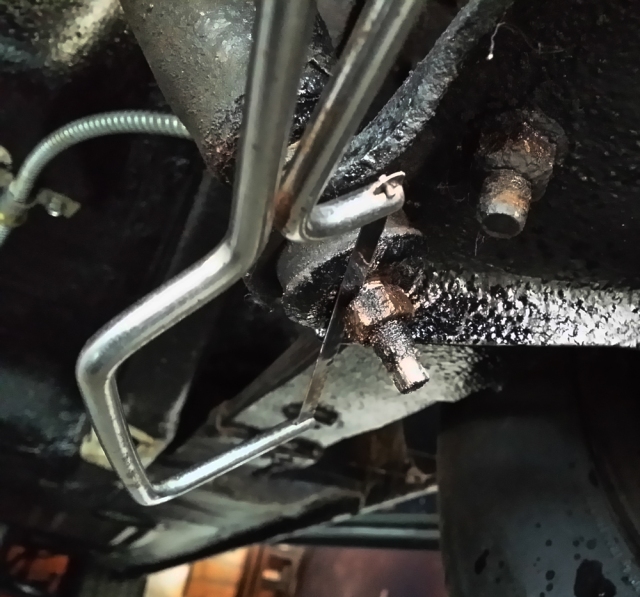 Almost out of the bracket

hanging from the top 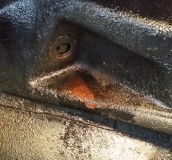 removed (rubber bush can just be seen at the top)

Twisting and pulling downwards freed the entire shock. At this point I then got back inside the car and cleaned up the top mounting and looked for any rust issues. The top was fine and felt very solid. I applied some anti rust treatment as a precaution anyway. This would give the treatment time to cure and dry before the refitting. While treating the inside I found the old rubber bushing and the old metal top plate. The fact they were left in there tells you something about the care or lack off rom the previous attempts at restoration I think. Getting back under the car work started on the left hand side shock. The bottom of this shock had the nut on the end of the thread. I held the shock still by a pair of pipe wrenches and sharp jab of the spanner cracked the nut free. A fee more turns and it was off in a few seconds. The levering against the weight of the car and the mounting plate moved the mounting of the shock up not the piston itself. This was seriously seized. Eventually I managed the shock out of the bottom plate. Twisting and pulling the shock downwards released it from the top. Again anti rust treatment was applied and checking the integrity of the metal, which after inspection was fine. 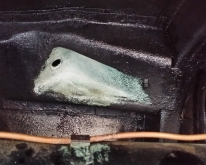 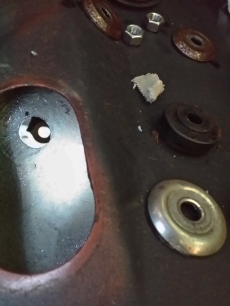 In theory this would be the easier part. The shocks had their own locking nylon nuts for the top and bottom of each shock. Removing the nuts top and bottom exposed the rubber bushing and the plates, take of the top plate and a single rubber bush. The rubber bushings have a different face each side. The smaller lip on the inside goes into the metal mounting brackets and then is centralised in the holes. The other side of the metal again has the larger lipped part of the bushing to the washer plates each side of the mounting brackets. Apply even pressure for the nuts just to hold in place for now. 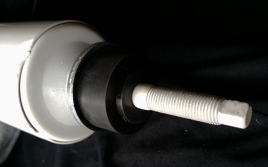 Larger section to sandwich the mounts

Larger section for the metal plate side

This smaller lip on the bushings will sandwich the mounting plate and stop the shock from moving around in the hole. Under the car the I compressed the shocks to their smallest size and placed the top into the mount ensuring central location of the bush. Keeping the pressure on move the bottom into location again making sure the bush is located central in the hole. Repeat the process for the other side. Check the top of the shock from inside the car to make sure the bush(s) are seated correctly. If they are not, being as there are no nuts securing anything you can move them into place until they are secure in place.

Central in the hole, but I moved the bush a fraction to sit the lip dead centre in the hole. 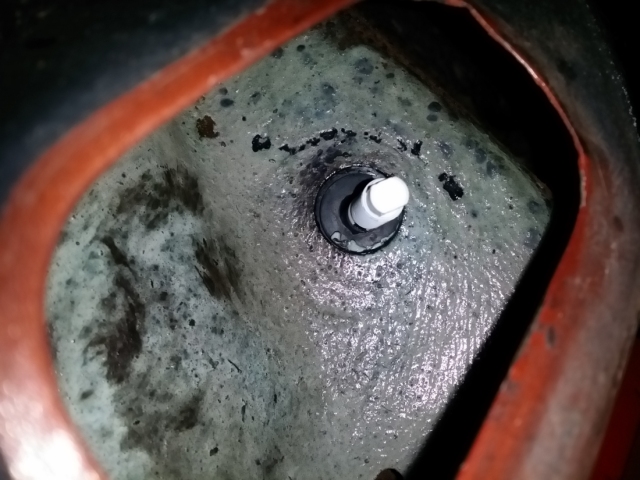 Under the car again place the larger lip side of the bushing under the bottom of the mount, then add the metal washer plate, the nut and screw on to stop the bush and the plate falling off.

small lip to the inside of bracket

Don’t make the mistake of having the bushings upside and replace the plates as I have shown on these couple of pics. The extra smaller lip on the rubber bushings always goes into the holes to sandwich the bracket which will help stop the shocks and bushings moving around. In theory the bushings will touch each other inside the bracket holes. 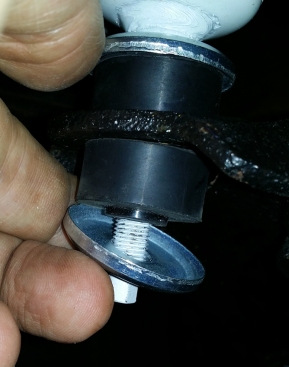 Deep socket time again to tighten up the nut while holding the shock from twisting. When there is some small pressure make sure the bush is again located within the hole. Continue to tighten until there is some resistance on the plate and nothing is able to move freely. Take a quarter to half a turn extra to nip into place. Repeat for the other side. Inside the car at the top place the rubber bush onto the top of the shock stem and the plate. At this point you may need a helping hand under the car to stop the shock from twisting as you bite the nylon nut on to the thread. Or, you can mole grip the shock into place and wedge against the chassis to stop it twisting. Messy, but it can be done. Again nip the top of the nuts up quarter to half a turn when pressure is felt from the socket. 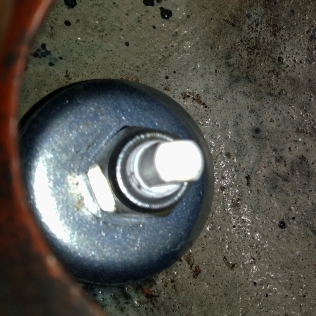 left side with the flat showing, top

Again make sure the bushing is seated correctly all round. That’s the job done. Spray some anti rust if you require around the cavity. When any anti rust is dry (if you used it), replace the rubber grommet and replace the rear seats. 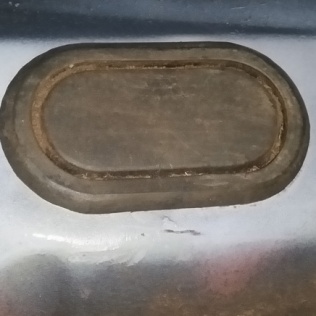 A little longer than I expected due to the fact I had to cut the right side shock stem off and then I applied anti rust on the inside and the underside of the car. Total of three and half hours in total.

The car now sits on the leaf springs fully. When doing the bounce test in each corner the car stops bouncing immediately. The car feels much firmer and now sits squarely.

Since shocks and struts are an important safety component of your car, Ford recommends that those parts meet or exceed the original equipment standards. Preventive maintenance and the correct replacement shocks on the Ford Mustang ensure a safe and well performing vehicle. 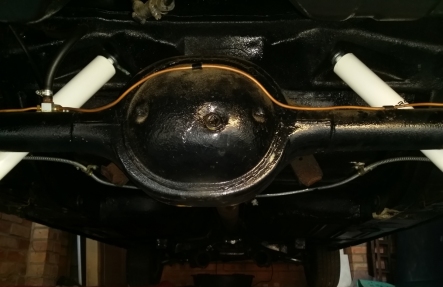 Ohh, the white shocks look pretty awesome from the back too!