Or noted as a “Vise” for our friends the other side of the Pond in the good ol’ USA.

I have a bench in my man cave which basically for woodworking, and I have had it for years now as an ex-display model.  Those of you who are eagle-eyed would have spotted that the bench has two vices one on the front the other on the side at the other end. Now this is fine most of the time but when you have a pice of metal to hold or something to drill these don’t really hold it tight enough due to the wood jaws. They either dig in and mark or slip out. The vice on the front jumps the screw thread when you do it up to tight. I have convinced myself for years now that this is an automatic torque wrench build into the vice. It has kept me sane for a number of years now. So it has become more and more of a nightmare trying to hold stuff now, even a meer nip is enough to jump the thread. The time was right for a new proper vice especially as I am doing my car up. There have been plenty of times that I have had to hold things with mole grips squashed in the vice. Safety first of course!
So for Xmas I asked for a new vice or Mustang bits. I got both, I made a note of the one I was after and here is a review of that vice.

Whats in the Box?

To put it bluntly – The vice and that’s it! There was no instructions, no guarantee no bolts no nothing! In fact I should ring Stanley up and ask them if that is correct or not. But still, it’s not rocket science, it opens, it closes and it turns. Not hard.

Note on the design of the box – the box had “Fat Max” Heavy Duty Bench Vice all over it. Yet the vice itself does not mention Fat Max at all! Odd.

It’s heavy, 11.5kg heavy to be precise. It is made of a cast Iron with a Roll-formed screw thread underneath which is chrome plated, not quite sure why as you won’t see it. The other external parts that are in contact with the hands are also chrome. I will come to each of these later. The Finish is a nice battleship grey and looks like it’s to stay on there for a while. There are no visible seams and the curves are all nice and round and looks a quality piece of kit. Everything about this vice just seems to shout “go on, try to max me out if you dare!” The Base is nice touch and will hold the vice at any angle on a rotation 360 deg. 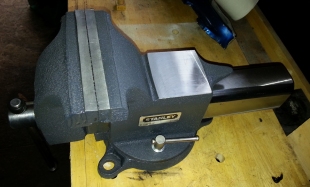 The Base is a swivel idea, which one of the main reasons I went for this model. There are three mounting holes; two holes mounted at the front either side of the jaws and one at the back directly under rear section of the vice. There is nothing to stop you mounting this how you want but this makes sense to me, as two at the front support the jaws sideways leverage and the one at the back prevents tipping and extra support. All the pictures I have seen show this configuration. There were no bolts supplied which I was a little grumpy about, a few pence for a few bolts – come on guys!

Located in the base is a flat plat plate that has two vertical studs that locate on the side of the main vice and is held in place by two chrome T-Bar deep nut tighteners. Once these are loosened the plate drops away from the under body ring in the base and allows the vice to spin on the plate to the right angle. Tighten these up and the vice will not move. This is partly down to the weight of the vice itself, the friction of the vice on the base plate and the tightening of the T-bars. There is no grease or lubrication to aid in the swivel, as you don’t want this to slip regardless. If it does stick or seize up, the whole vice can be lifted off and the plate will drop away to allow the removal completely. I have now got some very sturdy bolts, washers and a some oversized wing nuts that I will fasten the base to the bench with. If I need space I remove the vice, if I want all the space, the wing nuts spin undone and off comes the base. It’s what I wanted and it’s what I have.

Here’s the base exposed with the T-bar tightener showing, 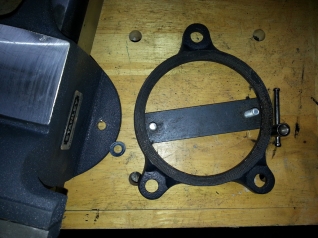 The underside is often overlooked and can tell you about a vice. I have spent £20 on a budget vice in the past, and gone to grip something hard, and there was a great clunk and a crack showed at the bottom of the jaw. The cast was not great and so it was useless. But this looks good, the worm/grub screw looks deep and meaningful. The undersides have all been machined flat too in order to allow clean smooth operation. There is a collar at the handle end that has a threaded bold going through it to hold it in place. My only disappointment here was the lack of lubrication on the thread. Now it’s nothing I didn’t sort out myself, but you would have thought it should have been done. Don’t get me wrong, it worked fine, but I would want to see something on there at least.

The jaws are 150mm across or in plain old English 6″ (inches) across. The max opening is 6″ (inches) as well. Past 4 ” the vice gets a little front heavy and the rear screw will start to feel the weight. There is a nice feature that is not immediately noticeable or mentioned from what I can see. Just under the main jaws there is a set of concave built-in jaws that are capable of holding rounded objects in place. Obviously the size of the object is a restriction, as in the minimum size that can be held even when the jaws are shut. The maximum diameter that could be held without getting in the way of the main jaws is restriction. It is an additional feature that you can’t complain about. I like that idea – a lot! Anyway, the jaws. Nothing is going to get out of these babies! In fact anything delicate will not come out unmarked unless you pad each side of it of course, or do it up with a little care.  For a little extra money I would pay to have a set of alternative soft(er) jaws to swap out as you need too. In fact I have ordered a pair of soft jaws for it just for that reason. There are some parts that wont matter if they have the vice marks on them, but other most definitely will. In fact I expect a lot of the items to come out with the kriss cross effect if you go mental and try to wind the jaws through the object your holding. The jaws are held in place by two threaded screws in each half of the jaws in order to replace them should you need to, like a softer set. (Are you reading this bit Mr Stanley Tools?) I would recommend getting a soft set to be safe, they are only a £5 – £10 or so. To nip the jaws shut you don’t need a bar on the end of the handle to do it. Progression of tension is a good feedback to the hand during the winding. 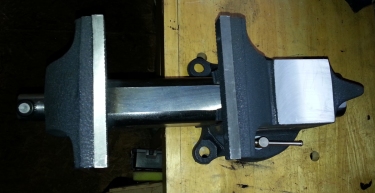 This is again a polished chrome bar that has a nice touch here, the ends of the bar have a rubber stop, this reduces the metal bell ringing in my head when I let the bar go and it slams onto the grub screw. I guess this will eliminate metal fatigue and wear and tear on my ear drums as well. The handle will turn 25 revolutions from min to max opening. The handle has a nice polished finish and the length is about right for the vice, too much and you will apply to much torque. To short a handle and it does not give enough leverage to hold things secure in the jaws. 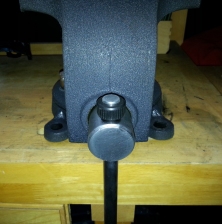 There is a machined and polished flat “anvil” area at the back. this is full width across the main body of the vice. A useful addition to close proximity had surface for smaller items. The machined parts on the visible side are also polished and again look like attention to detail has been applied.

It’s a vice, it holds things tight and it will continue to hold things tight. I really can’t see much that will go wrong with this vice. It’s classed as heavy-duty by the makers Stanley. It is certainly heavy, and I expect it will take some severe punishment before it is troubled and so yes, it looks like it heavy-duty for usage as well. The jaws look vicious and look like they wont round of crack. 6″ clearance (150mm) is quite a lot of space to hold anything with. The rotation is good to allow a more user-friendly working area. The jaws are going to mark softer metals if you’re not careful, but there again, I don’t want things to slip or move if I put them in the jaws in the first place.

This should be straight forward, value for money it was a great buy, the lack of lubrication on the worm screw was a little surprising, and an extra set of jaws wouldn’t hurt anybody, neither would a set of nuts bolts to secure it. Like I said I would have paid £5 extra for a softer option jaws and would expect bolts. Long term will tell me how good this vice is once I have given it a bit of a hiding. First impressions and the usage it has had so far, its been a real good bit of kit. It’s a real basic piece of equipment that has not changed in major design for centuries. I could have been full marks with extra jaws, proper lubrication where it was supposed to be and a registration card or some sort of literature.