In these classic Mustangs there are switches that attach to the dash which is metal sheet of course. There is a spacer behind the dash and in front of the switch which keeps the switch from moving. To get the wiper switch there is a bezel that sits on the dash in a locating lug. The switch is held to the dash by what is like an elongated nut with a cross headed to with a hole in it for the stem of the switch. 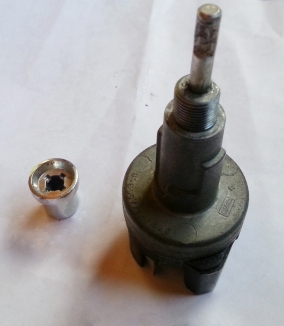 switch and the bezel nut 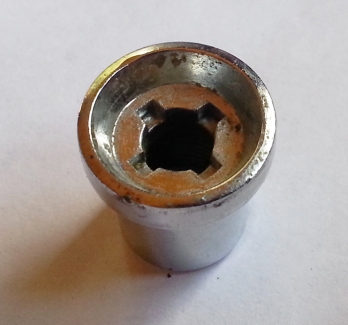 on the main switch shaft

Once you remove the knob from the shaft you have to undo the nut to release the switch from the back and release the bezel from the front. There are ways to do this and there are the shortcut ways. You can use a pair of small screw drivers into the lugs and twist it around. As you have to use a reasonable amount of force if they are on good and proper, the chances are you will slip out of the bezel and graze the dash area. The proper tools are round and have a couple of pins to locate and twist of the nut.

Old wiper with the rubber removed

The process was simple, I needed to make a pronged tool out of this old wiper. The idea came to me when I was looking at the fluted back of the blade and it was sort of the same diameter of the bezel at the narrow end. The only snag is that I had to use the prongs in the middle of the bezel and then cut a grove to allow the stem of the switch to be avoided. Any excuse to get the Dremel out and use it to make something.

Firstly I removed the flexible riveted part of the arm at the end and put it to one side. Next was to cut far enough in allow the “u” shape of the arm to move to the edge of the bezel while allowing the outer part of the frame to be over the lugs in the bezel. I roughly marked it out on the wiper and squared the marks all round. I then attached the fine cutting discs to the Dremel and started to gently cut through the wiper frame while held in the vice. I didn’t take pictures at this point as it was an experiment and not sure it would work, and no point in blogging a failure although the idea is sound. Once it was cut free I could see the frame of the wiper was hitting the edge of the angled inner part of the bezel. The outer part of the frame would need a corresponding chamfer to the bezel. This was quickly ground of with a blaze of sparks. The wiper arm is fairly small I could grind the angle on both sides at the same time. With sufficient clearance of the chamfer the whole arm section sat flush to the surface of the inner bezel. I decided that I need to create the pins for the recess in the bezel first as this could be the most difficult. This was a case of taking some very fine “L” shape cuts out of the frame. Both sides had to be done separately and they almost looked identical, well, not bad for free hand anyway. The last part was to create the opening in the middle for the stem of the switch. Again this was free-handed to the length I wanted. The long-nosed pliers pulled the metal from the centre channel. Checking of the tool shows it was working as desired the pins were the right depth into the holes and I was happy. Now I decided to get clever. The part I removed in the beginning I decided was going to be my “L” shape T-bar (all be it one-sided) to turn the prongs at the bottom in the bezel rather than use a pair of pliers to turn it which was my plan. I cut the opposite half off the part I didn’t want, that left me the holes for the rivet and the attachment. I reattached and pliered the mounting closed, there was a bit of movement but it worked. Then I decided to go for it big time. I wanted the lever part to be collapsible and to make storage easier,  well that was my excuse. I was having a ball cutting and grinding – making something useful. I saved myself twenty odd pounds on a tool I would use once or twice. But now I have a unique tool I made and I am proud of it anyway. Who else wants to make a tool out of old steel wiper blade?

The photos are of the switch out of the car when I was working on the wiper motor. It’s also easier to see and take the pics.

open all the way 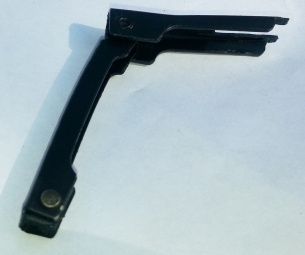 close up of the pins

close up of the pins in place 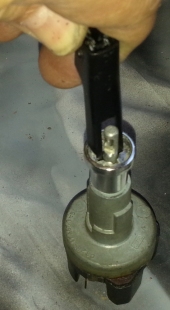 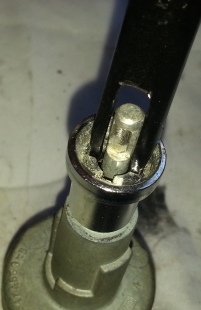 I am not a trained engineer, I did woodwork at school, I wanted to do metal work but I wasn’t allowed for some unanswered reason. Thirty five odd years later I still wonder why. I hated woodwork.

The tool works and hey I even sprayed it black again. Whether it will last the test of time I doubt, but how many times do you take these things apart? Not often – I hope!