Manufactured stamp by T & E Tools. A simple lever tool for removing the push on wiper arms from classic cars.

There is no box just the packaging.

A simple lever opening action. The tool has plastic covered handles for grip, but mainly to cover the edges of the metal handles. 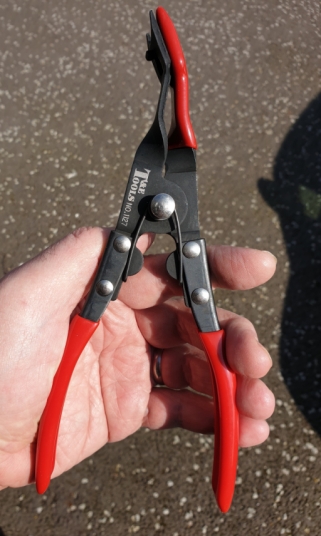 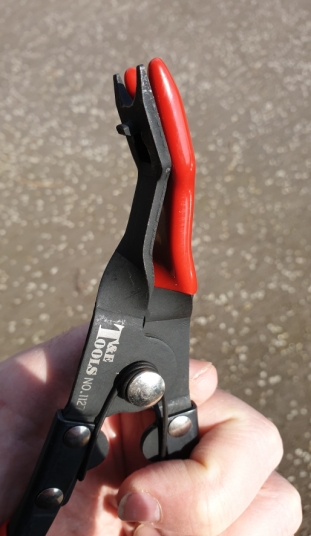 There is a spring in the centre that keeps the jaws shut. The spring itself is not that strong, but enough to keep the jaws closed.

A solid well made tool with the metal being a few millimetres thick that won’t bend when using high pressure to remove from the wiper spindle splines.

Note: I’m not sure why they riveted the handles to the jaws of the tool, surely would have been easier to have a single piece of metal and shape it?

The jaws are designed with a cut out to allow the tools to go under the wiper arm and close to the spindle. This is important as the pressure is applied to as much of the arm as possible while not being allowed to slip out from under the arm. The jaws are angled to allow a flat easy insertion between the arm gap and the bodywork. One side of the jaws also has the plastic cover, this is to place the bottom of the jaws against the paintwork which will not it during use. The top part of the jaws has a raised notch to stop the tool pressing against the spline thus reducing the upwards leverage.

The plastic bottom of the jaws also provides a non-slip base.

The jaws have a max opening of 1 1/2″ which is more than enough for the spline clearance. There is plenty of leverage available and lifted the sprung wiper arm straight off without a problem. I also suspect that any corroded spindle would be no problem either. As an extra precaution perhaps laying a soft covering on the surrounding area, just in case the sudden release from the spindle flicks the arm into the air, if you did have hold of it properly.

There is however a very similar ‘trim removal’ tool. I strongly advise against using it for wiper arm removal for a couple of reasons. First, the base footprint is much wider would cause damage to the area around the spline due to bare metal direct contact on the paintwork. Secondly, the trim tool is not as substantial and would probably bend. The comparison here to show you what I mean, head on and side by side. 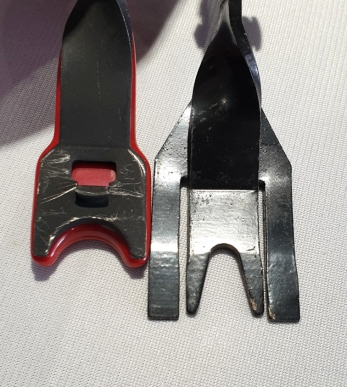 I really like this tool. I have used a big flat ended screwdriver to lever of the arms in the past. But, any slip will gouge a nice trench in your paint work. I got feed up with breaking into a cold sweat doing that, it simply wasn’t worth the risk. Get the right tool for the job.

At this cost it’s not worth the money, hence the mark down on points.

Ease of Use: Very simple and quick to use. A great tool that works perfectly.

Value for Money: A total rip off.

I enquired a while ago about getting a ‘sample’ from a Chinese manufacturer of this tool, hoping to get one at cost and much cheaper of course. I was amazed when I was told it would cost about £3 EACH to produce, with a minimum order of 250. So charging $20 (Australian dollars) is a complete con. Even charging half at $10 would still give over 200% profit, how much more do they want?

Unfortunately I couldn’t find this or a similar tool for sale in the UK, so I reluctantly ordered it, along with the postage and import costs this cost me just over £40.  However, that is much cheaper than a spray job!

This tool is more specialist as it’s only really used for older cars (not just Mustangs), as newer cars have a nut to hold the wiper arms in place. This tool will be used very rarely, but for the time it saves, little effort, no stress and peace of mind it gives you, this is an essential tool, it works perfectly. If you are doing this on a regular basis – you really do need this tool.

But for just one man and his Mustang it would be a rarely used, thus it’s a luxury if not expensive, nice to have tool.

However, a large flat blade screwdriver will also do the job, if you are careful.

Pay the silly cost, or take your chances with a nice paint job?