The birth of the Mustang

Nineteen sixty-four and a half was a year of upheaval. A British pop foursome was taking the world by storm, a black civil rights leader was awarded the Nobel Peace Prize, a Cuban revolutionary addressed the United Nations’ General Assembly, and Ford introduced a brilliant new machine to the world.

Normally when auto makers build a car even as early as the spring, they call it by the next model year. But purists are often pedants. Hence the Ford Mustang’s official debut is 1964.5.

Its looks were considered unusual for the day. At a time when American cars were famed for their ostentatious wings, fancy fins and extravagant curves, the Mustang came across as more understated—even veering toward European tastes. Certainly less expensive to build. Chief stylist Joe Oros said, “We were told to design a car that the ladies would love that the men would love just as much, and that’s exactly what we did.”

It was beautiful and cheap (starting at $2,368), and an instant hit. During its first day on sale, 22,000 orders were taken. It went on to sell a record-breaking 417,000 in those initial 12 months and more than a million within two years. Heck, parents even bought 93,000 Mustang replica pedal cars for their kids in the run-up to Christmas 1964.

Although an earlier concept version was a two-seater with a mid-mounted engine, the final production model we all know and love came out first as a notchback coupe and a convertible, each with two-plus-two seating. The fastback version launched in 1965.

Engines ranged from a 101-horsepower straight six to a 4.7-liter V8 making 271 hp, with V8-powered models outselling the frankly lackluster six-potters by around three to one.The United States soon caught Mustang fever. A 1966 model was taken apart and put in elevators up to the 86th floor of New York City’s Empire State Building and reassembled for display on the observation deck. For no other reason but for the fact that the car’s popularity was rocketing, especially with the building’s manager. However, there’s a deeper significance to the ‘Stang.

American society was becoming larger and richer. Up to that point, two-car families were rare. The Mustang made it possible and desirable to own two cars: one for hauling the family around, plus a second for Mom or Dad’s occasional use. A sociological shift was taking place.

Then the most famous Mustang driver in the world showed up in a film calledBullitt. This must be the ultimate product placement. All it took was nine minutes and 42 seconds of jumping and sliding around San Francisco for the whole world to fall in love completely. McQueen’s car was a 1968 GT 390 Fastback. And that chase scene is still a highlight in motion picture history (the editor, Frank Keller, got an Oscar for his efforts). Since its launch, the Mustang has starred in more than 500 films, its first major celluloid appearance being Goldfinger.

One notable owner is President William Jefferson Clinton. While holding office as governor of Arkansas, he and Hillary drove around in a 1967 convertible that originally belonged to his younger brother, Roger. Clinton is on record as saying that leaving his Mustang behind was one of the hardest parts of moving into the White House. 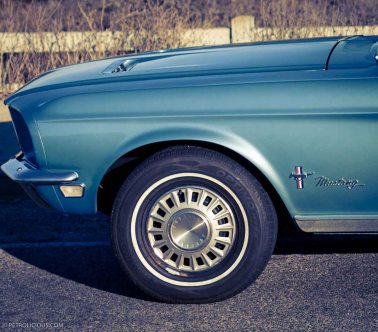 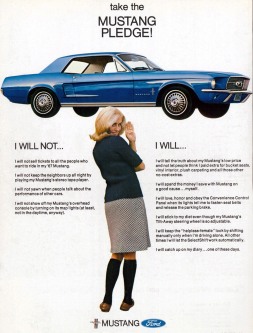