This weekend I was not down at he garages of Mustang Maniac but I made a visit to the Enfield Pageant where I went along to see the set of cars they had there. I was surprised that they took the UBB (ultimate Bad Boy) 1000bhp Mustang there, it was raining and they told me it was quite a handful in the wet! I wanted to get some spray paints and look for anything unusual for the garage or man cave. There was some metal garage signs that I liked the look off but my wallet had very stressful time while I was thinking about it, needless to say the purchase was not made. It seems that the these shows are becoming more of a family thing with fun fairs, garden stalls, toy stalls etc. Obviously they are there in case the rest of the family get board while the petrol head of the family has a fix on all the stalls there. Everything from engines and gear boxes to bulbs individually laid out in trays. Due to the weather the waterproof clothing stall done a few brisk sales for some reason. The down side was there wasn’t a huge amount of cars there to start with due to the rain. As it brightened up there were more cars to see as they were nursed out of the warm garages. The theme this year was the First and Second World Wars. The exhibits proved popular, at one point it was difficult to get into, I suspect that had a lot to do with the weather. The war tent had a rare Vauxhall war car and was the first time I have seen the Vauxhall emblem in 3d as it were.

The tent next to the War Exhibition was an American themed idea, there was a great Rock & Roll group there banging out some hits as well as some classic American icons. The Oldsmobile even had a propeller on the back, not sure what that was all about. anybody in the USA help with that one? 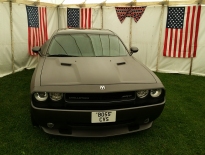 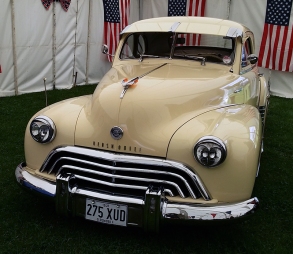 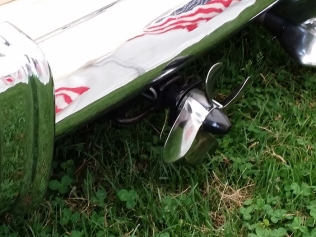 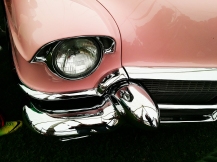 Outside there was a lot more cars and lined up made a good looking row. 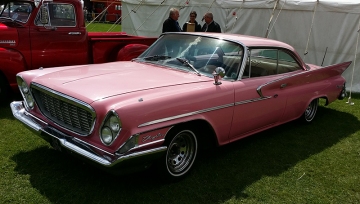 There was a rare car there that I had never heard of before,”Murena”. So the story goes, there was a couple of very rich guys who got together to make a sports estate car, no rear seats required as it was just so they could go fishing and hunting with space for their equipment. It was said they liked sports cars but they weren’t practical. So they built their own.  Oh to be rich! 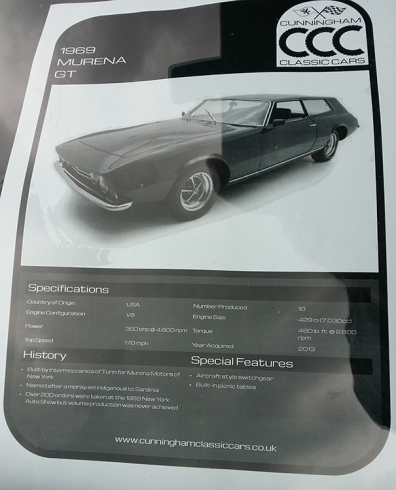 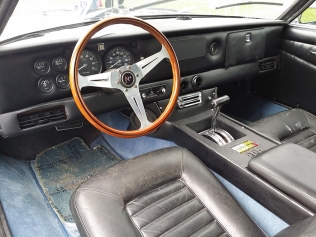 Mustang Maniac’s cars were out in force, and I can see they have lots more of their own cars on their blog page. I sat with the guys for a while during the rain storms and enjoyed the company. Thanks Guys.

The British cars were there too but in limited numbers at one point. Even took a picture of the only Stag I could see there for Stag Owners Club, who have a blog here http://stagownersclub.wordpress.com/ Why do I mention these guys? If I hadn’t of bought a Mustang I would have gone for a Triumph Stag as a restoration project. But, it turned out I have Mustang Muscle cars burning in my veins. 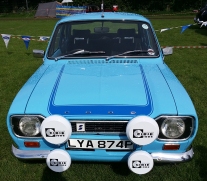 More American cars splattered around the field, This huge Greyhound Truck was bigger than I had ever dreamed of, the brown rat rod was painted like that and was quite sound metal wise.

TV Stars; The hugely popular “Only Fools and Horses” comedy show had one of the original Reliant (3 wheelers) there. 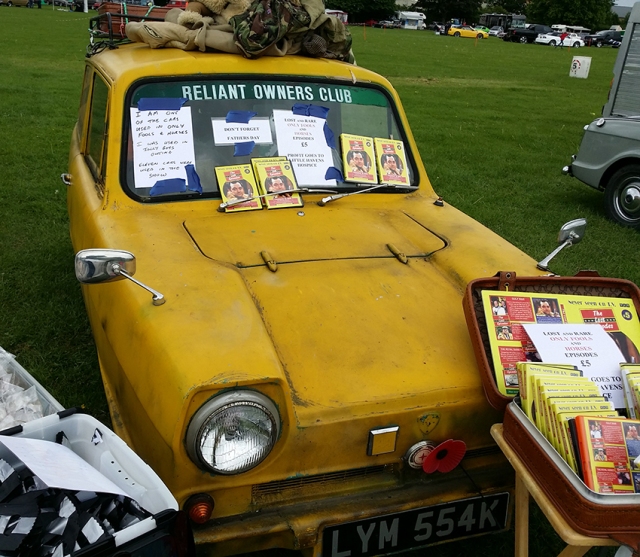 The other classic is the original 1966 Batmobile, there were three fibreglass models made of the original and I believe this is one of those from the London Transport Museum. I have added an article on this car as it was Ford based Lincoln Futura concept car with a 390Cid Ford v8 engine. 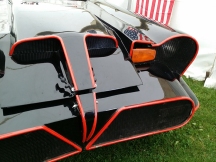 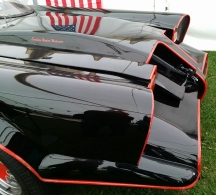 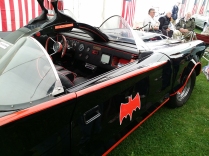 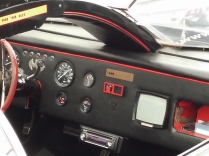 The whole day was summed up for me in this one photo. The guy has a classic rover estate which was the first one I had seen, he was walking back to his car carrying another rear wing for the one that has gone rotten beyond repair so he was saying. The classic car got a badly needed part. For me that is what these shows are all about. I was really pleased for this guy.

My final thoughts for the day was little disappointing as it was wet at times and the owners of the classic cars looked like they didn’t want to get them wet. that itself did mean that cars were little limited for choice. I did hear that Saturday was a better day and Sunday was not so good. It was a shame there was not more, but I would think twice about taking mine down there in the wet I must admit.

I'm just a man with a Classic 1966 Ford Mustang Coupe and an ever increasing collection of car detailing products to keep it clean. When I first started this blog this is what I wrote: "I had bought a project car that had been neglected, set fire to, rusted and abused. As a result of all that the car needed a bare metal strip down, a nut and bolt restoration." Four and a half years later the car was completed, on the road and shown at the UK's premier Classic Car Show, everything that was done to that car is documented here. I now have the privilege to drive one of America's most recognised cars and a true Icon, the Ford Mustang. I'm still sane after the blood, sweat and tears, so would I do it again? Oh yes!
View all posts by One man and his Mustang →
This entry was posted in General and tagged Batmobile, Enfield Pageant 2014, Greyhound, Lincoln Futura, man cave, Murena, Mustang, One man and his Mustang, Only fools and horses, petrol head, rat rod, Rock & Roll, Triumph Stag, vauxhall, World War. Bookmark the permalink.