Weekend trip to Mustang Maniac was greeted by the cold dark damp air but it didn’t quell my enthusiasm to get there, but I was a little nervous about the task that awaited me again. This weeks update will be a fairly short post as a result of that task, there would be a lot of trial putting bunches of wires here or there and making sure no cross overs or snags, in other words a lot of work with nothing to show for the hard work. It was going to take at all day and then some. Wires are in my dreams now, yellow, red, green, blue, black, white, purple and all colours in between, thick and thin all with type written on the side. I eat spaghetti and I see wires, I look at the gaps in the pavement and I see wires. Trying to make wires look neat is therapeutic and frustrating all at the same time that’s for sure. Reaching up under the dash holding things up made my arms ache like mad. While wrapping all the ugly wires into their respective branches it was at this point is where my second roll of wire loom fabric tape ran out. Yep, that’s two full rolls of twenty-five meters by nineteen millimetres of fabric tape used so far, and it only looks like a few meters have been taped up. I just don’t know where it has gone, it’s not the cost as it’s only a couple of pounds as roll, it just goes nowhere. 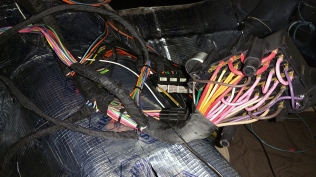 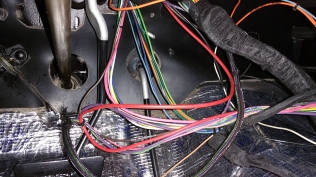 The worst part was trying to get the fuse panel mounted onto the dash area. The original long screws were just self thread into the firewall. Yogi when doing the brake lines used one of the holes to hold a bracket up and cover the ugly hole which was a good move. But, on the other hand this meant that I had nowhere to fit the fuse box and some of the lengths of wire they give you aren’t that generous, moving it to another locations wasn’t going to happen. So a change of plan was to use a longer thin diameter nut and bolt through the firewall and into the fuse holder. The only trouble is once I had drilled out the holes to take the bolts they would just push back out the other side as I tried to mount the fuse box up. This is where I could have done with a third hand inside the car, one to hold the bolt, one to hold the fuse box and one to put the nut on the bolt. Not easy but I managed it, not sure how but I did. At one point the air turned a little blue as the colour of my car when the bolt fell out the firewall onto the floor and I had to put it all down and re-bunch the wires back up again. The branches that were in immediate view were wrapped up and cable tied neatly, just for now at least. Yes I do know that this is a gamble as loom should be tested before it all gets put away tidy. So fingers crossed is all I can do for now. 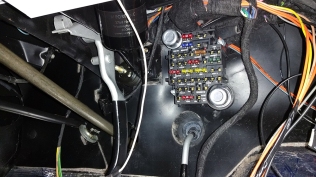 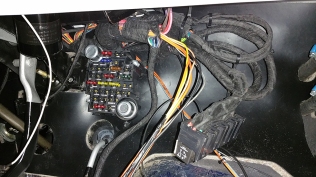 The only oversight with this American Autowire loom is a simple one – where do you put the relay boxes. The bank of four relays need to be mounted somewhere and the kit does not give you any idea on how to do that for you. I will have to have a word with the Yogi to see what he thinks and what ideas we can come up with. The rest of the wires were pulled through to the places such as the lights, ignition, dash, wipers radio etc. 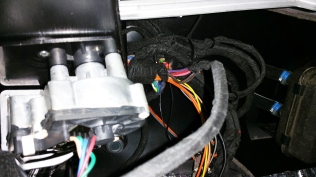 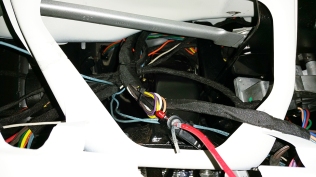 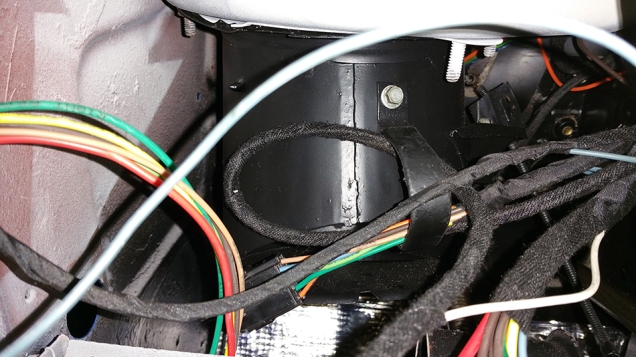 Next week I will be hoping to put the new sparkly new switches onto the dash to make the loom live capable as it were. Then it will be more tidying up and putting the wires away.

I'm just a man with a Classic 1966 Ford Mustang Coupe and an ever increasing collection of car detailing products to keep it clean. When I first started this blog this is what I wrote: "I had bought a project car that had been neglected, set fire to, rusted and abused. As a result of all that the car needed a bare metal strip down, a nut and bolt restoration." Four and a half years later the car was completed, on the road and shown at the UK's premier Classic Car Show, everything that was done to that car is documented here. I now have the privilege to drive one of America's most recognised cars and a true Icon, the Ford Mustang. I'm still sane after the blood, sweat and tears, so would I do it again? Oh yes!
View all posts by One man and his Mustang →
This entry was posted in General and tagged dash, firewall, fuse box, Mustang, Mustang Maniac, One man and his Mustang, therapeutic, wire loom tape, wires. Bookmark the permalink.