It seems as though I was working all day on a single bit of the car at Mustang Maniacs and seemed to get nowhere. when I bought my car there was a bag of old bits in the trunk and there was a single item that was brand new in bubble wrap. What was it? The glove box. Yep who ever had the car before me wanted to fix the glove box and not the wire loom that they set light too. I had kept the glove box safe and sound ready it to fit it. This weekend was that day. The glove box is made of black cardboard and has to be the most awkward job going for what it is. You can’t push it through the front opening so you have to feed it up under the dash. Then I realised that you can’t get to connect the lamp up as its right by the side of the box. So I had to move it out the way again. Fitting the switch was quite easy and just pressed in the hole. with that in place the single connection attached to the new dash loom. 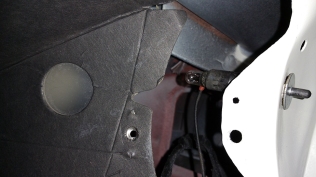 The next part was to work out the fittings. The latch is held in place to the dash via two screws that can move to adjust the door catch. the two screws are attached via a plate with two screw holes that align with the oval holes of the dash. For somebody with big hands this was a bad deal for me. Eventually I managed to fit both the screws in place and nip up the fitting. I could adjust this as I needed to later. 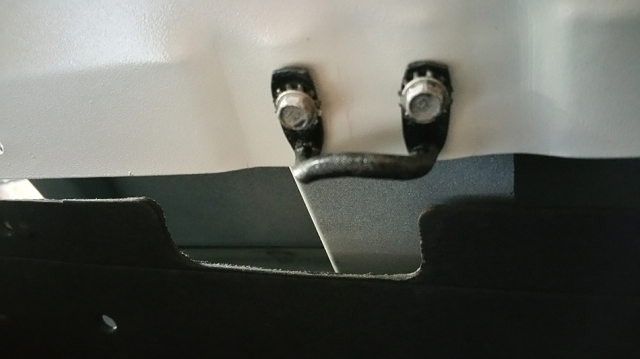 The original glove box was riveted in place at the factory, so now the replacements have holes and a screw thread attached to the glove box which aligns up with the dash itself to secure it in place. I had to hunt around to find some self tapping screws to fit the holes. The same was for the upper two screws that held the top in place. 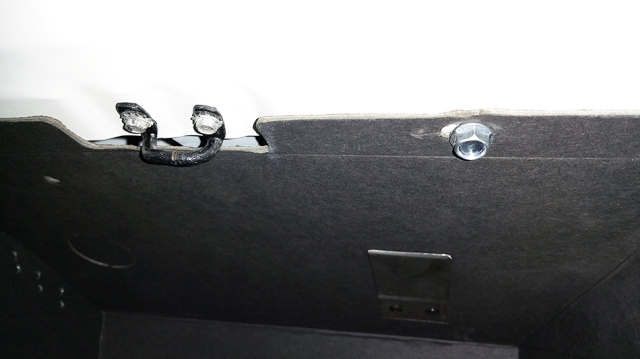 The lower three screws were a complete pain as they were adjustable and needed to have a nut of some sort to fix them. In my many compartments of odd nut and bolts I found the same sized fittings and had to dislocate my fingers to hold them in place while I screwed them up. With this being made of cardboard it doesn’t take much to bend and weaken the card and looks rubbish. Having to treat the cardboard with TLC and try to move it into place was an art form in itself. I removed the hinge that I fitted last week in order to get more room and be able to see what I was doing. 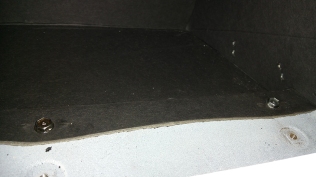 With the bottom in place I managed to tighten the screws up and look to the sides. These previously riveted holes were simple fit as I only need a nice looking couple of screws small enough to fit. I found a couple in Yogi’s spares draw in his tool box and took the liberty to borrow them on a permanent loan basis. The two screws either side were followed by the support strap which fitted just above the side screws. 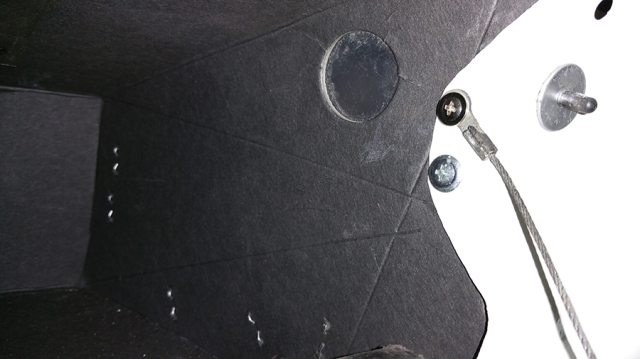 The easy bit, fitting the hinge back in place and the glove box door. Fitting the door was done in two stages, making sure the hinge cleared the dash and the front closed. Three screws for the hinge and three for the door front were adjusted and on first shut the door clicked into place. The only real result I had that day so I tightened up the catch at the top. Job done.

At this point I looked at the inside of the door and thought to myself, I need to make that look better. So I will take it of again and clean it to higher standard to make it look acceptable. I don’t want to replace it as it’s the original part of course. 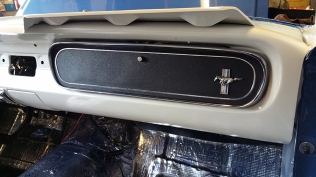 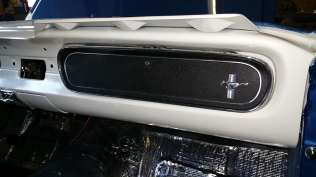 The remainder of my time was wrapping wires with loom tape again that I knew wouldn’t be moved. So although the post is short and sweet, I thought it would take an hour or so ended up taking me longer to do than fitting the front suspension on the car! Is it just me or do we all have days like that?

I'm just a man with a Classic 1966 Ford Mustang Coupe and a collection of tools that just keeps getting bigger in order that I could do the job right. When I first started this blog this is what I wrote: "I had bought a project car, that had been neglected, set fire to, rusted and abused. As a result of that she needed a bare metal strip down, a nut and bolt restoration." Four and a half years later the car was completed, on the road and shown at the UK's premier Classic Car Show, everything that was done to that car is documented here. I now have the privilege to drive one of America's most recognised cars and a true Icon, the Ford Mustang. I'm still sane after the blood, sweat and tears, so would I do it again? Oh yes!
View all posts by One man and his Mustang →
This entry was posted in Car, Photo's and tagged bulbs, cardboard, glove box, Mustang, Mustang Maniac, One man and his Mustang, restoration. Bookmark the permalink.