This weekend was the last weekend at Mustang Maniac before the Birmingham NEC Classic Car Show. There was lots of tiny little jobs to do and tweak but priorities have to be played. Yogi was getting parts ordered up for me that I would need to fit the cards so I could get them from the stores. On my return I was given my instructions on how to fit them. The door cards cover the inner workings of the door and finish the interior, they are a notorious pain in the butt to fit and look good. Although my interior is a Pony spec I didn’t like the Pony door cards. So Adam ordered mine up as a special order for what I wanted. Hopefully just something very subtle different to the standard ones you see out there. The cards a dry fitted to the door to see where the mechanisms need to come through. This was fairly simple as I just got a little dirty dust and put it on the tops of the mechanism. This left a mark on the white underside so I knew exactly where to punch the holes out. John came up trumps with a set of punches to cut the holes, that way the holes are clean and shouldn’t run. The little clips on the back of these door cards slot into cut outs in the card itself, and the metal legs press into the metal of the door frame. Simple so it sounds, but the reality is every clip (around thirty in total) has to be aligned to the holes and pressed in until it snaps into place. Press in the wrong place and may damage the cards. There is a wax sheet that is held in place same principle as the rear quarters were. On top of that was two springs, these keep the door car pressed against the door handles to avoid any bow or sag in the card. The handles for the door opening and the window winders are a single screw secure. The arm rest comes in two parts; the chrome base and the coloured arm pad on top of that which in turn is held in place with two screws underneath.

The cards in place. 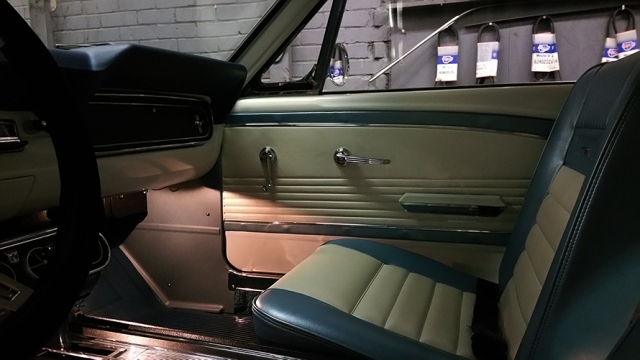 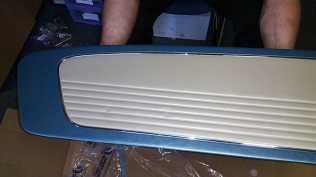 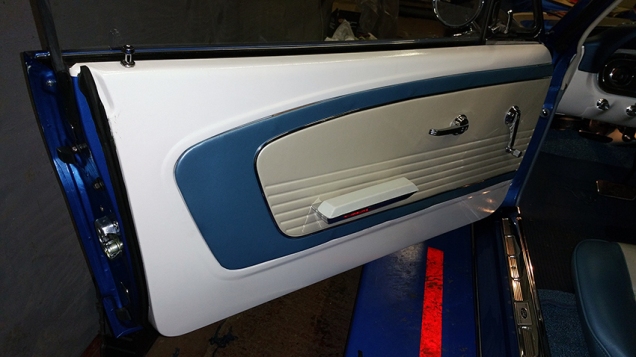 At his point Paul who originally sprayed my car came back to “Mop” the paint work, “Glaze” it and then a final “Wax”. This was a professional detail going on here now and was being made to look her best for the show. The rubber parts were masked over as was the vent to avoid any debris going down there.

The process was the roof, trunk, hood, then the sides. The was repeated for the glaze and the waxing.

After each process had been done I just stood there in disbelief looking at how good it was. Paul took great delight in telling me “Don’t worry, it will get better”. OMG was he right. the depth of gloss on this car staggering. Paul said he doesn’t often get to shine them up after he has painted them as the customer takes them away and that’s it. So after one year Paul is back finishing his beautiful work of art he has created for me.

Then the last step was the wax to be hand applied and ;eft for twenty minutes and hand buffed off.

I can’t begin to tell you just how delighted I am with the paint and finish. The reflection in the poor light and rain in a workshop is still nothing short of incredible. Now I know how much time and effort these Concours cars are prepped. Paul spent four hours doing my car, and that’s a professional detailing. 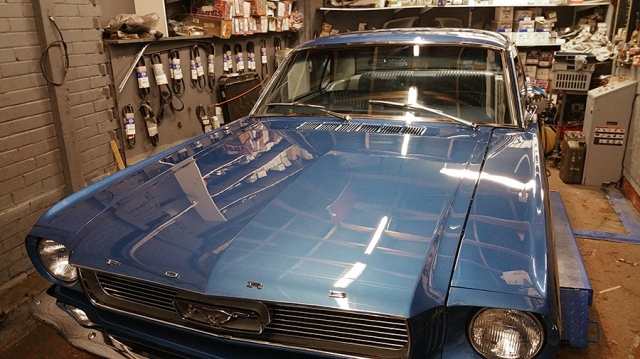 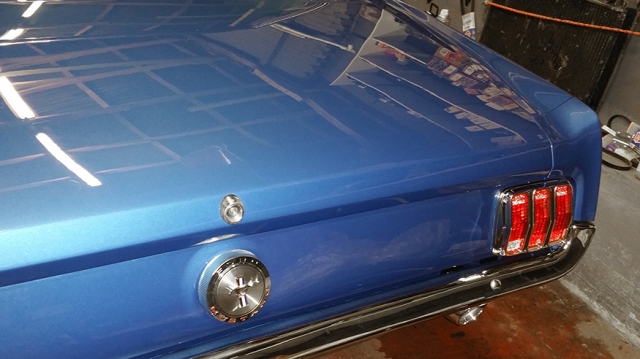 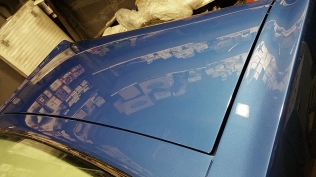 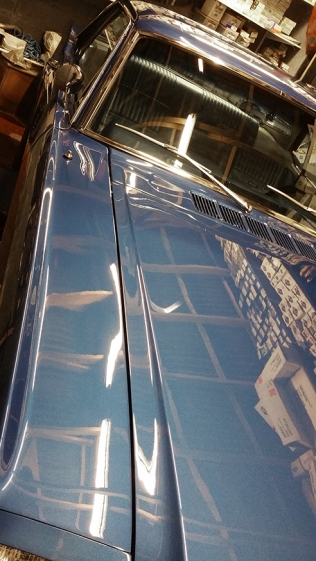 Paul (a different Paul this time) was down during the week and said he would kindly fit the badges up for me. These take a little time to get right and in the correct places. Why? Because these were going to be stuck in place and no holes drilled in the fenders to take the clips on the back of the badges. The process involved in a lot of measuring and patience. Due to the timescales involved I wouldn’t have had time to do it all on Saturday. So a big Thank You to Paul & Yogi on their help. 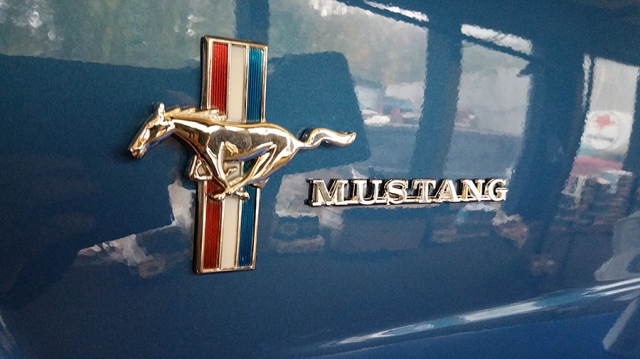 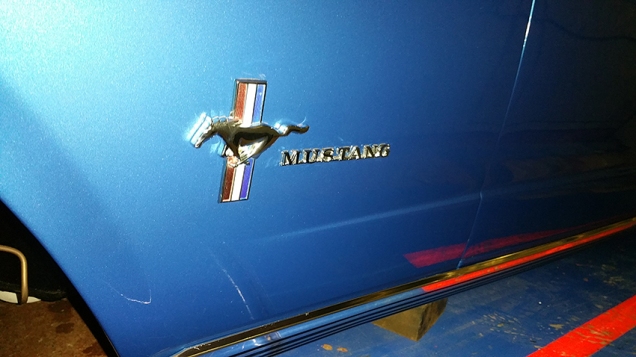 The messy part got saved until later which was the wheels. The “Raised White Lettering” is coated in a blue protective film which needs to be cleaned off. Yogi gave me a pot of his road film cleaner (the last he had) and told be to just rub it till the protective film starts to come of. Plenty of elbow grease later the results are awesome. The before during and after pics. Before you say the wheels don’t look shiny – I know, they have a coating of Gibbs Brand Lubricant on them to protect from any moisture. They will be buffed up at the show. 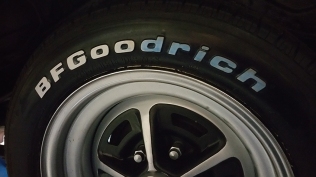 The tyres were then treated to some tyre dressing to give them back that nice new look, what am I on about?  They are new!

How long has it taken (time wise so far) from purchase to restoration completion?

I could work it out as man hours (I hate to think just how many, but at least a couple of thousand hours), perhaps I will work it out one day. I have spent at least one full day a weekend on the car and sometimes the other day too, cleaning, prepping, painting, making the bits for the car etc. I even spent hours in the shed after work in the summer months, working into the darkness preparing bits that would be needed for fitting to the car.

That was the all main jobs done, so technically that that’s the restoration finished. But there are some small things I need to do still, technically it’s ready for MOT all important road worthy test, then the full road testing for final set ups. I expect there will be the odd problem running in and settling down after sixteen years of nothing, such as carb, timing, first few quick oil changes, antifreeze etc. Then it will be onto the full Registration and her UK plates to be fitted.

Speaking of number plates – I pretty much think this says it all, they say a picture speaks a thousand words. These plates have been made specially for the Car Show as Mustang Maniac and LAR will be transporting my car to the show for me. Thanks to Lance for the great looking plates.

I owe a huge debt of thanks to all the guys at Mustang Maniac and the associated people who helped me with my project.

Adam – Inspiration, mentor, Owner, restorer, mechanic, body work, fitter, parts, advice, storage, help, banter, forum and everything else in between. Without whom none of this would have been possible.

As you can see there are a couple of common themes going on here, the first is “help”; whenever I have a question I am not just answered, but shown as well. The guys time and patience spent with me as well as my sometimes (what must seem like) daft questions goes way above their call of duty.

The second is “banter”; the non stop ribbing for who ever is the chosen poor soul at the time makes it just a fun place to be and work in. The guys are all just brilliant and such a pleasure to work with and long may it continue. 🙂 On my  next car????

Then of course there is my Wife who bought the car for me in the first place. For four years she has put up with me working on the car away from home, working on the car at home. Writing about my car on the blog. Buying things for the car using my new best friend, Mr Credit Card. She has supported me, shouted at me for cleaning parts on the kitchen table, had frothy fit when I was spraying parts in the utility room (it was in the winter and needed to be warm). Put up with me storing parts in the house ready to go down the workshops next morning. Through it all she has supported me regardless, and I couldn’t have asked for anything more. Well, maybe a 1969 fastback for my next milestone birthday perhaps? 🙂 My “hobby” you started me on has turned into a way of life now.

Thank you Darling I honestly appreciate it.

I would like to point out that is not the end of the blog though – oh no!

There will be many more posts to come and there will be pictures of the other little jobs that need doing. So you see, it’s still going to be business as usual for me, maybe just not as often being posted each week.

I will of course take some photos of the car at the NEC Show this coming weekend with the car in its completed state, that way you can see the full effect, as indeed will I for the first time. I really hope to see you there, if you are there at the show, please come and say hello.

I'm just a man with a Classic 1966 Ford Mustang Coupe and an ever increasing collection of car detailing products to keep it clean. When I first started this blog this is what I wrote: "I had bought a project car that had been neglected, set fire to, rusted and abused. As a result of all that the car needed a bare metal strip down, a nut and bolt restoration." Four and a half years later the car was completed, on the road and shown at the UK's premier Classic Car Show, everything that was done to that car is documented here. I now have the privilege to drive one of America's most recognised cars and a true Icon, the Ford Mustang. I'm still sane after the blood, sweat and tears, so would I do it again? Oh yes!
View all posts by One man and his Mustang →
This entry was posted in General and tagged Birmingham NEC, door cards, glazing, LAR, mop, Mustang, Mustang Maniac, One man and his Mustang, restoration, sponsored, wax, wife. Bookmark the permalink.