A very special day for me today as I drove my car for the first time on public roads. Initially I was going to put up the full story of the complete nightmare it has been to get to this day registering her in the UK. But, I have decided that I didn’t want to ruin this post by having a major rant at the totally pathetic and incompetent Driver Vehicle Licensing Agency (DVLA) here in the UK. I will be posting a separate post on how and what went on with them very soon.

For now though it’s the good bits and positive vibes. Earlier in the week I had my number plates delivered and I was waiting to get a clear day to fit them on the car. The back of the car would be fine as that’s easy access, but I would have to roll the car out to get the front plate on. I wasn’t going to do that if it was raining. 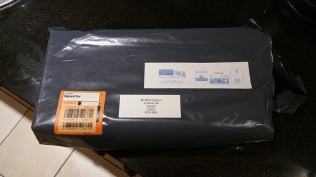 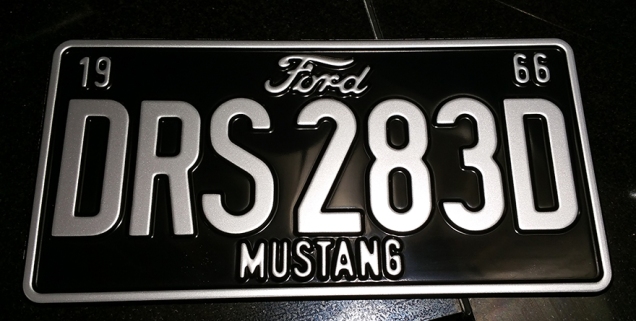 The new plates are pressed metal with silver raised lettering. I have been given a nick-name by the Mustang Manic guys which is “Sat-Nav”. I make no excuses here – I am completely useless at directions. I am like an ant, I follow the same route all the time if shown. I get lost coming home and I have lived here over ten years now, honestly I am terrible. I have to put my sat-nav on to go to the MM yard still. When I was at their yard getting ready to fire up my car up I had to go and get petrol, they had to draw me a map of directions so I didn’t get lost on my way to the petrol station, which is less than a mile away. It’s a great sense of pleasure for the guys to take give me grief over it still. Why did I mention that? On the registration plates when your order them you can have type at the top and or bottom, I was going to put Sat-Nav at the bottom of mine. At the last minute I changed my mind as it would probably end up getting hacked of having to explain what it means to people. So I went with the standard Ford Mustang and the year, just in case people don’t know what it is.

As the plates don’t have holes they have to me drilled where you want them. I found the old USA reg plate for my car to use for the template. I aligned it up on the back of the new plates and market it with a pencil. 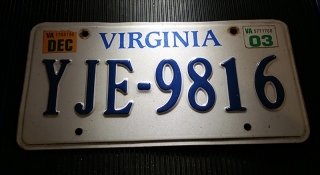 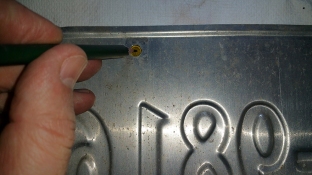 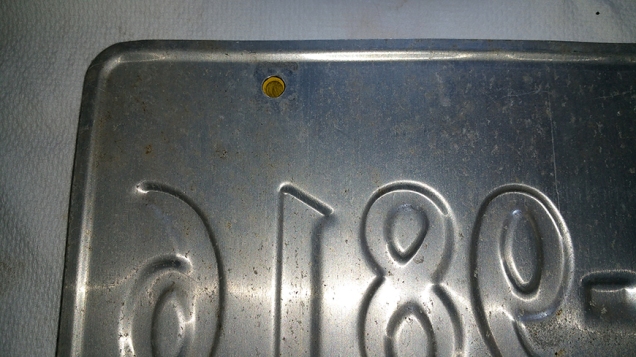 I placed a small piece of masking tape over the marked up areas to stop the small pilot drill from slipping. With the small hole done I took a larger drill to the pilot hole to allow the screw to go through. 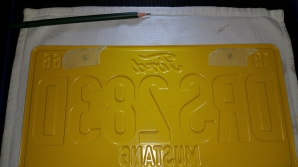 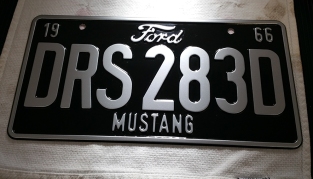 There are just two holes at the top and a rubber grommet at the bottom. Screwing the plates on was really the last job on the car apart from maintenance from now on. It was a real buzz to tighten up those screws. 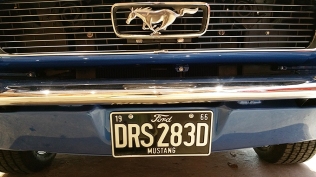 The car was ready. The weather was not bright sunshine, but it was dry and bright, today was the day. I got changed out of my working clothes and slipped into the driver’s seat. I took a deep breath trying to steady my slightly shaking hands. I put the key in the ignition and pumped the gas pedal a couple of times. The engine turned over for a few seconds and eventually the fuel was pumped into the carb. The engine fired and the exhausts barked into life, I revved it a few times and sat there for a what seemed liked minutes, but was only a few seconds. For the first time I adjusted the lap belt and pulled it tight. I checked the gauges,  oil pressures were up, voltmeter was now reading just over fourteen and a half volts, petrol gauge showing a quarter of a tank. It was enough as I only intended to drive a few miles to see how she would settle down. I wound the window down, I pressed the brake pedal and pressed in the button on the gear lever to pull it into “R”, the revs died down as the gearbox engaged reverse, I released the brake and she rolled back out of the drive onto the road. I stopped the car and pulled the lever into “D”. The revs dropped and I released the brake and she rolled forwards while straightening the wheel. I squeezed the gas pedal the revs picked up and the exhaust stepped up their noise level, I was off. I smiled to myself and those few seconds will never ever be erased from my memory now. After a few hundred yards I came to my first junction, indicated and looked both ways. Normally this is second nature and I drive this way to work in my normal daily car. Today was different, I looked again and then again. I pressed the pedal and I moved into the road. The gears changed, but I didn’t feel it as it was silky smooth jus the engin note changing. I drove towards a pub where some guys where outside smoking, the group turned to look at my car. The buzz stepped up a level. People were looking at my car, as this is a narrow road the throb of the v8 and exhaust tone was bouncing of the buildings and a little girl with her dad pointed at my car, I don’t know what was said as the car soumd was my world at the moment. The road opened up into a country lane and I began to settle down a little. Sitting on the left didn’t feel strange, it just felt right and natural in the car. I drove a little more and pressed the pedal more. No hesitation, just a change in exhaust note. I checked the speedo and I was doing sixty mph without realising it. I drove around till I found a nice quiet country road and turned into it. I got out to take a couple of pics before anybody else turned into the road.

I started to make my way back just taking in the roads and sound, oh that sound. It’s so much better than I ever imagined down a country road. I was concentrating intently. The result of over four years of love, passion and work culminated in this brief fifteen minute drive. Was it worth it, hell yeah. It was worth it and wanted to drive it more. The trouble is I couldn’t. I left my wallet in my other car and the wife had taken that car. So I had no money to put fuel in her today. I needed to keep some in the tank for that longer trip to fill her up. I pulled back onto the drive and relaxed. With sadness I turned her off and just sat there. The engine was silent, but I could still her sound in my head. I unbuckled and got out of the car and shut the door. I walked around the car and checked underneath for leaks or anything out of the ordinary. I pulled the hood and I heard the metallic little ticks of metal cooling down as I inspected for anything out-of-place. All was OK. 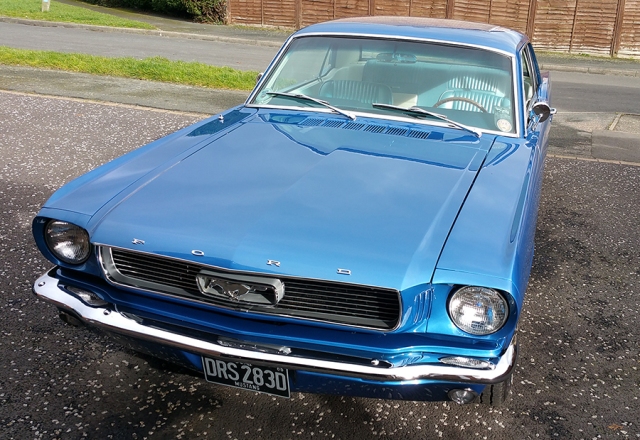 I tidied up some things in the garage and left her outside for some fresh air. With the tools away and everything back in the tool boxes I walked back to the car, got in and started her up again, I gently rolled her into the garage until the rubber ball hanging from the ceiling just touched the windscreen. I turned her off and got out. I covered her up and realised that only now had my smile started to slip away. Less than ten miles driven and yet those recaptured memories of driving my first Mustang over twenty-five years were reignited like a firework going off. Was it what I was expecting owning my own Mustang and driving a v8 Mustang? No, it was better, MUCH better. Unfortunately I can’t explain that feeling of completing a project and realising a dream come true.

Sorry for the lack of pictures, but there will be more I promise when I get more adventurous driving further afield. For now I am just so happy.

I noticed earlier today that Mustang Maniac blog posted about a ’67 390GT in Acapulco Blue. I had seen this car a few years ago and was the inspiration for my colour scheme.

What a day, what a buzz. More than that, what a truly awesome car Ford made in 1966.

I'm just a man with a Classic 1966 Ford Mustang Coupe and an ever increasing collection of car detailing products to keep it clean. When I first started this blog this is what I wrote: "I had bought a project car that had been neglected, set fire to, rusted and abused. As a result of all that the car needed a bare metal strip down, a nut and bolt restoration." Four and a half years later the car was completed, on the road and shown at the UK's premier Classic Car Show, everything that was done to that car is documented here. I now have the privilege to drive one of America's most recognised cars and a true Icon, the Ford Mustang. I'm still sane after the blood, sweat and tears, so would I do it again? Oh yes!
View all posts by One man and his Mustang →
This entry was posted in Car, Photo's and tagged '67 390GT, DVLA, exhaust, ford, Mustang, Mustang Maniac, One man and his Mustang, uk registration plates.. Bookmark the permalink.

20 Responses to On The Road