Posted on September 6, 2018 by One man and his Mustang

Back to back car shows where the prior show in Lavenham was rained away, then just seven days later was the weekend of the popular ‘Cars By The Lake’ in Fornham St. Mary, just outside Bury St Edmunds which was being promised nice weather, unlike the previous show. Sunday morning of the show I got up and checked the weather, it was sunny, I checked the app – it said sunny, lastly I asked the wife who said ‘It’s going to be a hot day’. I packed my day’s food, extra drinks, some suntan cream and loaded it all into the car and set of for the half hour drive. This big farm field has a carp lake in the middle of it, hence the name for the show.

I arrived at the road to the main gate and there was a queue already a dozen or so deep, the driveway to the field itself must have held fifty more cars itself. So I just had to sit and wait to get to the front. I was directed to the Bury Retro Car Club stand where they had reserved me a space, and yes I was the last one to the stand. 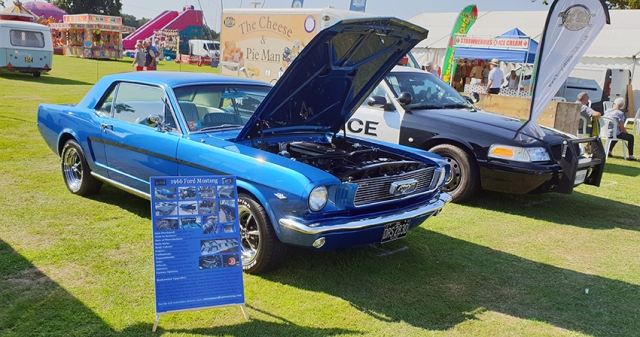 The club had a dozen or so cars, much more than some of the bigger clubs also at the show. They even had a fully functioning Crown Vic police car next to me. Working lights, siren, speed guns, cameras and bars at the windows.

I had a stream of people talking to me for the first couple of hours while I was gently cleaning the dust of my car, which was really nice. Eventually I managed to sneak of to have a look at the other cars. There was huge variety of cars from pre war to super cars. 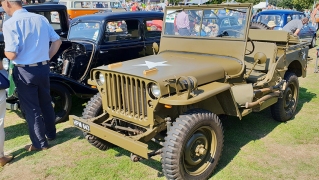 Super cars were scattered around from Ferrari, Porsche, Lamborghini and McLaren. Oh and an old Jordan F1 race car. 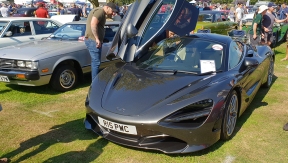 There was a nice selection of American classics, perhaps my favourite pic is this one of the old school Mustangs and the new model.

I would still have the old Mustang any day, or maybe tempted by the AC Cobra or GT40 kit cars. 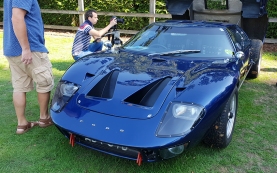 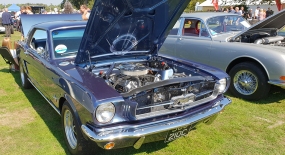 The remaining cars and bikes that took my liking in no particular order, except for the silver Aston Martin that was just gorgeous. 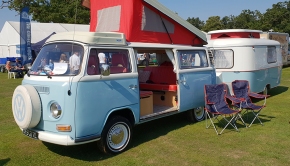 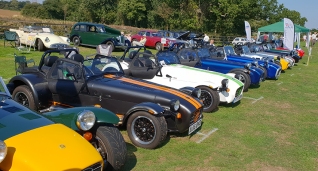 Last year they had over five thousand visitors on the day, I don’t think it was far of that this year, it was busy with a lovely atmosphere too.

An old friend of mine had his Alvis there at the show too, there is no paint job as the outside is just covered with the original leather covering. 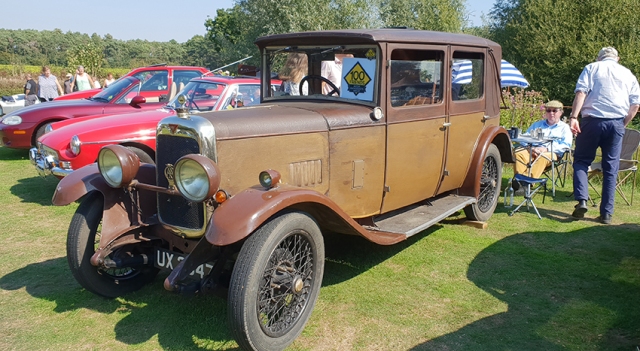 The bar was doing well, the food stalls had lots of business and the children’s play area was big hit too. What a difference a week can make. I hate to admit it, but the wife was correct again, who needs Google when I have her? 😉

I'm just a man with a Classic 1966 Ford Mustang Coupe and an ever increasing collection of car detailing products to keep it clean. When I first started this blog this is what I wrote: "I had bought a project car that had been neglected, set fire to, rusted and abused. As a result of all that the car needed a bare metal strip down, a nut and bolt restoration." Four and a half years later the car was completed, on the road and shown at the UK's premier Classic Car Show, everything that was done to that car is documented here. I now have the privilege to drive one of America's most recognised cars and a true Icon, the Ford Mustang. I'm still sane after the blood, sweat and tears, so would I do it again? Oh yes!
View all posts by One man and his Mustang →
This entry was posted in car shows, Photo's and tagged Bury Retro Car Club, Cars by the Lake, classic car show, classic cars, GT40, Mustang, One man and his Mustang. Bookmark the permalink.

4 Responses to One Week Later