The Sales Pitch from Meguiar’s:

“Meguiar’s Ultimate, our bar is simply higher. This is our most advanced, pure synthetic hydrophobic wax which offers our longest lasting protection. New synthetic polymers crosslink to form a protective barrier that amplifies reflections for incredible depth & mirror-like shine, without leaving white residue on plastic and rubber. Meguiar’s Thin Film technology makes application and wipe-off effortless, even in full sun!”

You get 311 Grams of the product in a sturdy tin with a cardboard information wrapper. Inside the lid there is a black Meguiar’s application sponge. This is Meguiar’s synthetic mixture and not a natural wax product. Hydrophobic definition: Repelling, tending not to combine with, or incapable of dissolving in water. 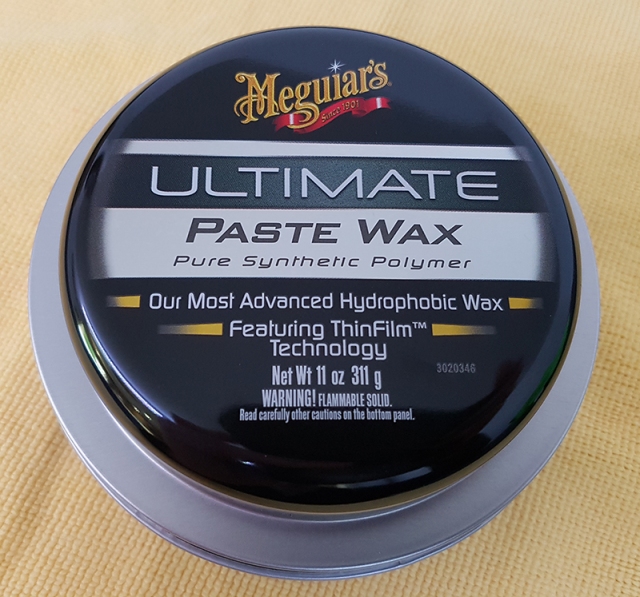 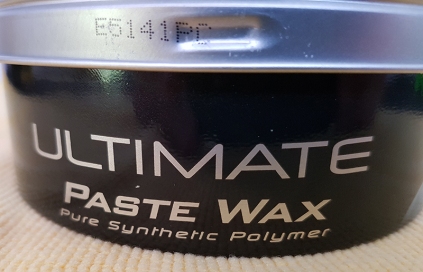 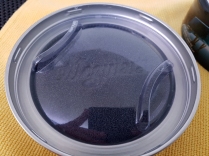 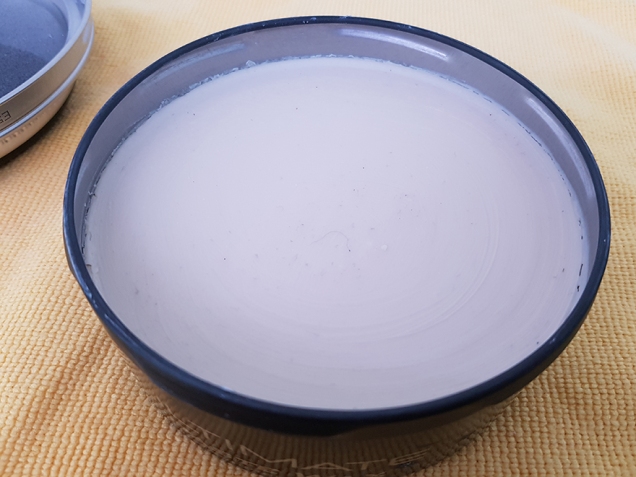 When I paid £30 for this I thought this was ridiculous cost of money. The most I had paid until then was about £10 and then I thought that was a treat. What you get is a very sturdy tin filled with a pastel lavender wax that smells just like scented candles from an expensive interior design shop. The lid is fantastic and well thought out. Why? Simply because it only takes a slight twist to put the lid back on securely and you don’t have to align it up in a particular place either to start it. I mention this because a rival company’s top wax has a plastic pot with a very fine thread, to put the lid on takes about three full twists to secure it and it will only start in one place. This is important to me because if you have slippery hands from the wax which you will unless you wear gloves it can be difficult to close the pot. Not with this lid though, quarter twist and its on tight. The applicator is a fine Meguiar’s embossed black sponge held in the lid by a plastic retainer. I prefer to call it a pad rather than a sponge to be honest. 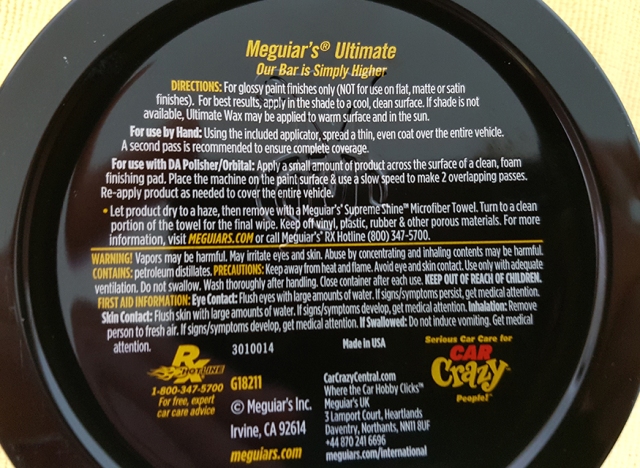 I am going to assume that you have washed, dried and done what ever you need to the paint to make it ready for the wax. The instructions recommend that you are in the shade and will be applying onto cool metal. However this is not essential as this product can be applied in the sun which makes a pleasant change. I left the Wax in the ambient air to warm up a little. Applying cold wax to a warm car can cause it to go on a bit lumpy or inconsistent from past experience with other products. The pad is big enough to cover four fingers easily during application. I was unsure how much to apply at first to the pad, so I had an enthusiastic approach should we say. I applied the pad to the car roof and using light pressure immediately found I had too much on there, as you can see by the thicker clearly visible paste. 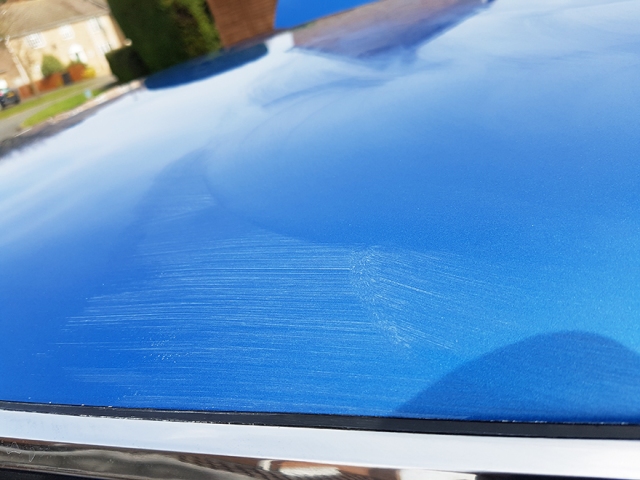 The secret is genuinely to apply a small and thin amount to the car. Towards the top of the above picture you can see the much more desired light haze you are after. The wax goes a long way from a small wipe over the wax in the tin. I deliberately left the thicker amount on the car to see what it would be like to remove after being baked in the sun. Application to the hood shows a little more detail after I got he knack of the application pad and just how far the wax will spread. 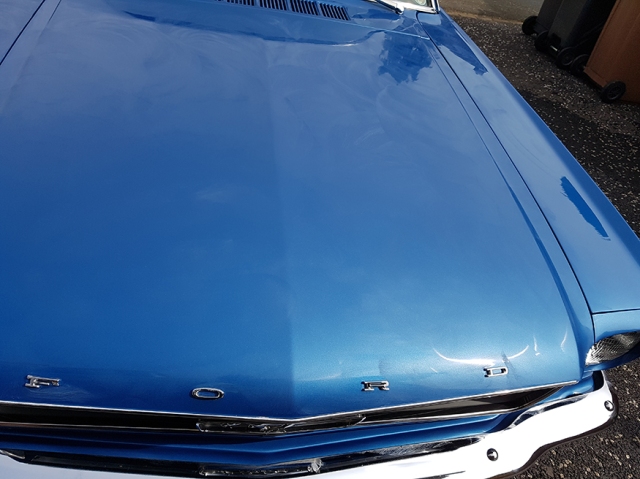 “A second pass is recommended to ensure complete coverage”. By the time I had been around the car once the haze had certainly dried and the second application when on just as easily, sort of reactivating what was there before. I left the thicker application as I mentioned above. I think I went a bit mad with the second application on the hood where a few places was a little thicker than required. In this instance – Less is more.

A high quality microfiber cloth is recommended which I now have a large supply off. The buffing off was effortless and not what I was expecting at all. Previous waxes I have used by Autoglym left a powder when buffing off and required lots of repeat buffing to remove the powder. This product however buffed off immediately and left a rich deep shine. Turning the cloth over for an uncontaminated part of the cloth left no marks what so ever, there was no film that could be seen where it was applied and there was no uneven light reflection. Impressed. The thick creamy mess from the first application buffed mostly off first time around, leaving only the thicker edges. A second buffing with the cloth again removed the wax to exactly the same standard as the thinner applied areas. Here half the hood has been buffed on the right. 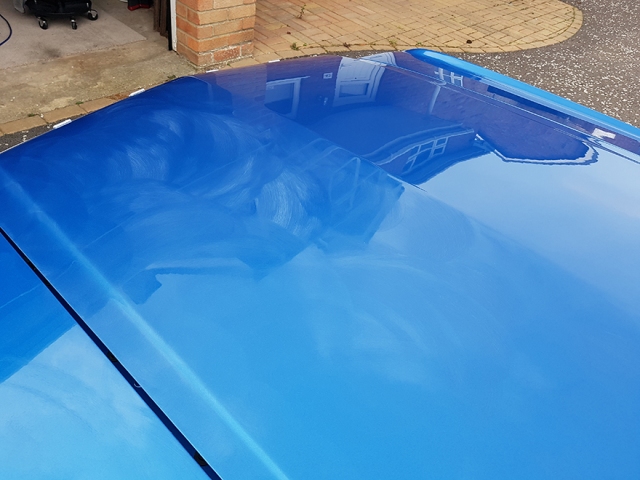 Spectacular. Have I Spoilt myself by getting top quality wax first? The car looks wet and the depth of shine is brilliant. 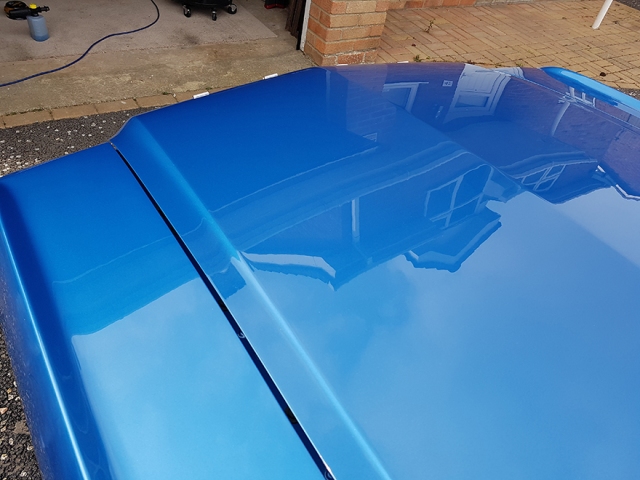 I held a microfiber cloth on the paint work to give an idea of the depth, it was slightly pointless as you can clearly see the top of the house and the clouds in the sky! 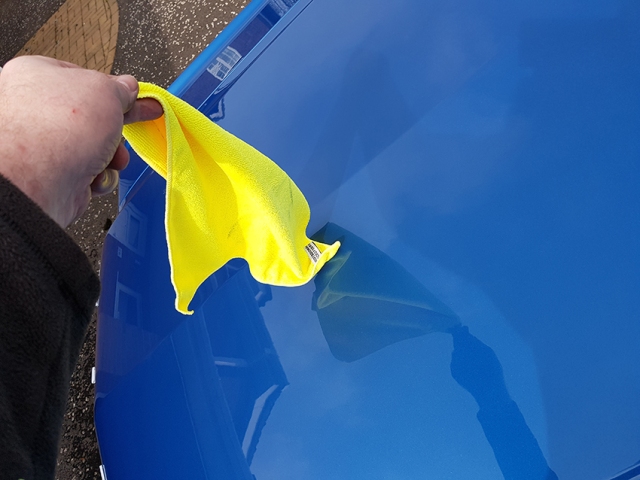 You can even see my shadow in the paint as well as the reflection. Accidental application of the wax to the rubber windscreen seal did not leave any horrid white marks on the rubber as I have seen with other products. Just a quick buff off and it was gone. Again very impressive for that alone. I have no plastic on the car that i can compare that to see if it will leave a haze on the surface of the plastic. The whole process took around two and a half hours, that’s two applications of wax and a buff off. The feel of the paint work is like glass, so silky smooth and on the angles of the car the cloth slid off, that was a unintentional discovery!

Note: I noticed one thing, a water drop run across the hazed wax  from the window gutter, before I got to buff it off that is. The result of me buffing it off left a mark on the paint that wouldn’t buff out. I re-applied the wax again to the re-dried section and the mark went no problem. The buffing up again left no before and after, or side by side where they were done at different stages. They blended perfectly. Make sure you have no water about and the car is dry.

At a car show the next week. 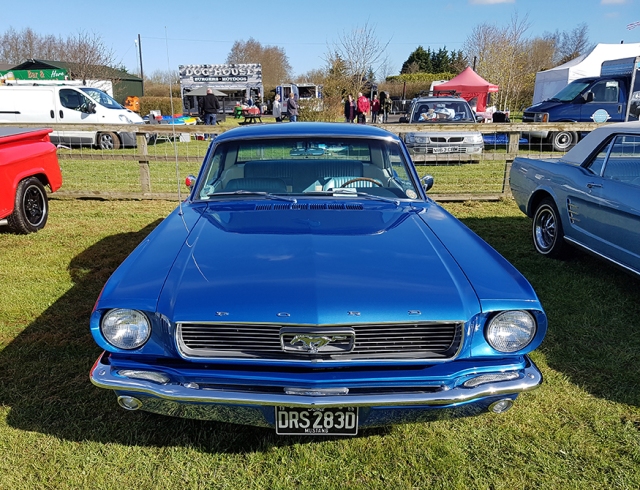 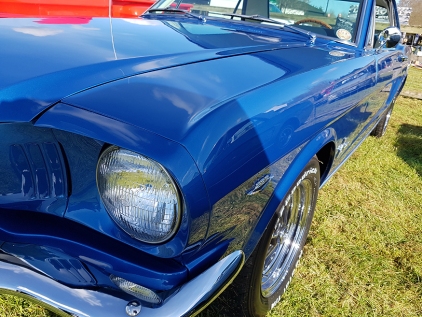 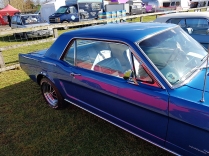 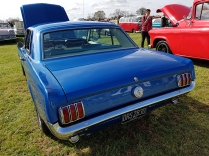 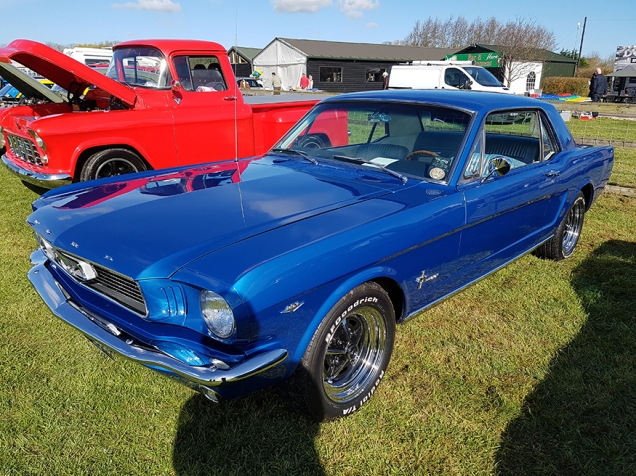 You can see some reflections on half of the hood for the depth of shine. At the show a week later I was asked twice what I used to shine the car.

Ease of use – 9 This was given the slightly less than perfect score due to the area under the rear glass that had a water mark that needed redoing. Non marking of rubber door seals is a massive bonus.

Finish – 10 I can’t fault it I have to say. Buffing was a dream with one or two wipes to get the shine. Would I recommend this? Without a doubt, it seems expensive but a little goes a long way thus making this a great value for money product.

Longevity is a big bonus with this wax as it’s synthetic.