The power steering pump looked in good condition and the pipes didn’t look like there was issues. It just looked a bit poor. After a few weeks of me getting the car I took it out and painted it and put it back in. I topped it up with fluid and watched it all run out the bearings at the front. It was shot to bits. I just all the fluid run out and I have left it that way since. Now I have my blog I thought I would post document the process and replace the pump with a new one. I obviously have to get the pump that has a tilted neck. This is for the Air Con to be installed that would be just above the pump.

To be clear the power steering is incorrect, this is in fact power assisted steering, but it’s easier to call out power steering.

After a visit to Mustang Maniac, I have changed my mind, the inside was swapped with a similar model and the old case was kept for the “stock look”

This is a really quick process. there are only three bolts that hold the pump in place and a few more for the bracket itself. There is a 7/8ths nut that holds on the pipe feed to the steering rack and a little return pipe that is held in place by a clip. Undo these first to move them out-of-the-way. Next is the adjusting bolt on the pump, followed by the rear and the front mounting bolts. I loosened the bolts till they were almost off, then took the weight and removed the bolts by hand. The pump is around a couple of kilos and fairly heavy.

Pump and bracket in place

Reverse view of the pump

top view of the pump

Once the pump is out-of-the-way the bracket bolts are exposed and ready for removal. Two will be around the water pump and the other two will be located down by the fuel pump.

Pump out of the way 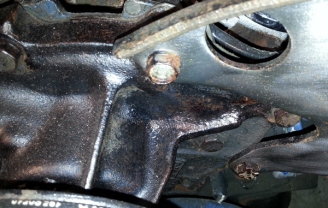 bolts just above the oil filter

Loosen the two bolts down by the fuel pump to allow movement, then move to the water pump bolts. I undone these quickly and the bracket moved enough for me to put the bolts back into the pump and block to stop any leaks that may happen or distortion. The bracket weighs as much as the pump and is a substantial piece of metal.

Recondition of the power steering pump

There are two types of pump for my car. The Air con version where the filler pipe is at a forty five odd degree angle pointing backwards an the vertical pipe that sits on top. I just like the look of the aid con version one to be honest. The reason for the angled pipe? It’s like that so the aid con pump and radiators all can fit in the space. Although I have no air con at the moment I might want to put it back in later on.

I didn’t realise that the insides were exactly the same, it’s just the case the case on the outside that changes. As I had an original pump and not a replacement, it was suggested to me that rather than loose the stock look swap the insides out and clean it up again. I was happy with that, shiny looks good but it doesn’t give the original look. Yeah, I have replaced some of the hoses to silicon and updated the ignition to electronic, but the main parts just look better as a stock part, a little worn looking, a little dented maybe; It all adds character to the car.

Case or “Can” Swap

The original pump was put into a vice and tightened just enough to stop movement with a large rag to stop jaw damage to the unit. The case was removed by removing the two nuts on the back that hold the case in place. A little gentle persuasion will free the seal at the base.

“Can” removed from pump body

The new pump also had the case removed and the original case put on the new working inside, the thin inner seal at the bottom needed to be checked that it was not out of place or damaged. The old inside was also swapped over to keep the parts together. Labelled up as “do not use”. The case is not delicate but distortion will ruin it as it will not seal again so care has to be taken.

The pulley removal was next. Again the pump was put back into the vice and gently held ready for the pulley removal. The removal tool is in three parts, two collars and a wind out tool. The collar sits on the pulley and the thread is put into the shaft and screwed in. The collar is then unscrewed and the pressure against the shaft forces the pulley wheel off. The are two places on the thread, one to hold it still and the other to wind the mechanism.

Fitting the tool collar in place

almost of the shaft

Note: This process of fitting is called “interference fit”. In other words – the bore of the pulley wheel is a fraction smaller than the shaft and only the friction keeps it in place.

The final part was to put the pulley wheel back on the shaft. The same principle to screw the inner thread in place and the thick ring forces the pulley over the shaft. This part of the tool is two parts, the thread and the push collar. 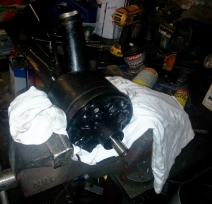 Can in place on the new inside

The pulley was noted where it was sitting on the original shaft. The pushing on of the pulley wheel was set to the same position as the old pump

That is the pump new but with the original case and ID tag in place.

There is no way on the planet that you will get the pulley of without either damaging the pulley, or the “can” case itself. You will need the tool.

I was lucky, I was shown how to do it and the tool was already there.

Treating of this power steering pump was no different to the other items. Firstly I used the wire wheel attached to the drill to remove the old paint, this only takes a few minutes and was down to bare metal within fifteen minutes. The rust speckles had not cause any damage to the metal and was basically cosmetic. 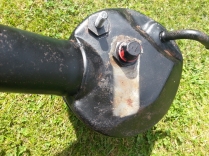 tag removed from the rear

After the rub down I applied the fe-123 rust treatment just to be on the safe side. As there was no rust and the sun was out this dried within ten minutes.

After the FE-123 was applied I then got some grey primer and sprayed two coats onto the pump. 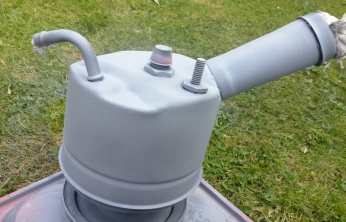 After the primer had dried (it was quick drying primer), I applied the Hycote Satin Black spray all over and allowed to dry. A second coat was lightly applied to even up the spraying. 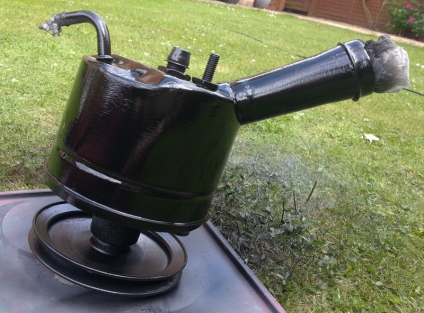 This is an exact reversal of the above as you would expect. I half screwed on the bolt to the rear stud and gently lowed into the bracket. The bolt to the front on the left as you look at it was next as this was the pivot bolt. The third bolt is the adjustment bolt so I placed it roughly in the middle and just nipped it slightly as I will not be using it just yet. Based on that fact there is no reason to get the pump belt or fill it with fluid just for the sake of it. I will need to remove the steering rack and replace the rubber gators that have split. Doing this would only pour out the fluid from the pump. 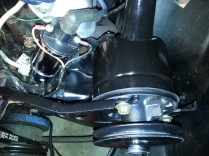 rear view with the pipes in place.

The case looks like new now and the inside of the pump is brand new, so this should in theory work like a charm. The specialist tool is crucial to fitting and removal of the interference joint. Without it you will damage the pump or the wheel.

This didn’t have to be done as its not critical for the driving of the car. But, as it is fitted I may as well do it ready for the future. the best part is that it looks stock and all the original parts are still there. For that reason alone I am pleased with it.

Was it worth it? Most definitely it was. The petrol to See Mustang Maniac and be shown how it was done was worth it just for that.

Leave a Reply to One man and his Mustang Cancel reply