Top side of the Bumper Stone guard

This is really quite simple I suppose, I finished the underside with the POR15 and can be seen on the Bumper Stone Guard Part 1 (here), and I needed to finished the other side. Due to the extreme cold we have had and the poor weather I has taken me a little while to get round to this, mainly because the filler wouldn’t set in minus what ever along with the rattle cans of spray. As it was good weather today – straight out there and on with the job. This will overlap a little with the Dinitrol review (here), or you can look for it under the Consumable Reviews. The reason for this overlap is because I need to use filler and then rub it down.

This time around I had to get rid of the old flaky paint and get it down to the undercoat or more depending on what I had issues with. There were two main problems with the top side, a poorly fitting radiator grill had dropped down and had dented and damaged the left hand side. Also a dent on the right hand side looks like somebody had dropped a spanner on it or something.

Deep gouge on the left hand side from poor fitting grill

It was looking like I was going to need to remove all the paint, and get down to the main problems. There was surprisingly little rust on the upper side, apart from a few places on the edges with only a very light rusting. The Dewalt sander came out (review here) and I started with the 80grit stuff to rip of the paint fairly quickly.

When I started sanding it was quite evident that there was some previous filler on the stone guard, to be honest not a lot but mainly in the middle area. I removed as much of the previous filler as I need to in order to get down to a workable level. The roughing of the 80grit sanding I couldn’t see as being a bad thing, it would give the filler something to adhere to. 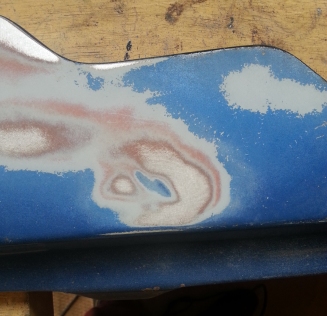 Removing the paint from dent 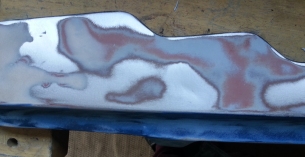 High and low spots of the dent 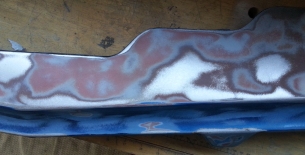 More high and low spots other end by the stamp

I changed grit down to the 180g and then the 240g to make it a little smother for the filler. While sanding the left end, I came across a few uniformed marks near the back. These turned out to be the stamp marks for the stone bumper guard when it was manufactured. Turning over the guard this was very evident, I reckon the bloke had or was having a bad day when they were hammered in. Now this would explain the filler and looked like factory filler in that case, was it? Did they fill the cars in them days? Anyway, although it was a nice feature I decided to smooth that out and make it non visible. 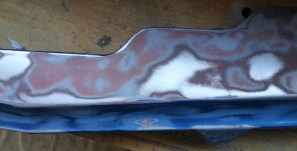 More high and low spots other end by the stamp

Stamp with high and low 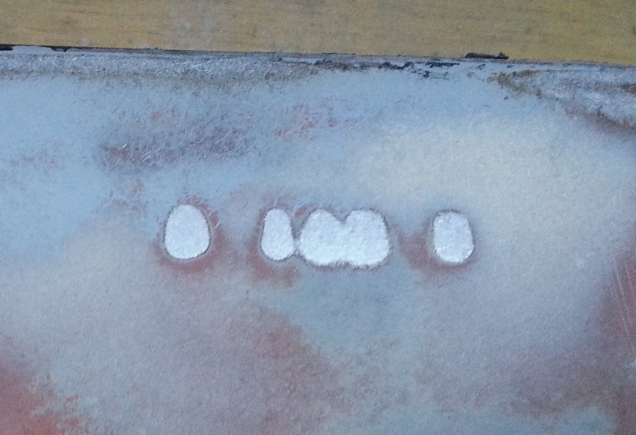 Stamp marks from the underside

I could go on about the filler and how I mixed it and how I applied it. I wont do that again as I have done the full write-up review of the Dinitrol, along with the application of it to the bumper stone guard (here), the filler is brilliant and its worth a read. 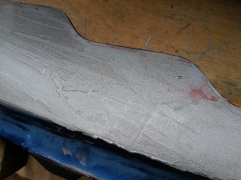 All over the dent 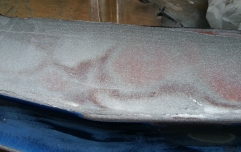 Application of the filler was a dream and I made sure all the rust was removed right down to the bare metal. It polished up nice with the lower grade sand discs. I allowed the filler to harden overnight – although it does say you can sand it after twenty minutes or so. I sanded it all down using the grade fine paper as I went along. I got down to the 320g and I rubbed my hand along the filler and it was like glass. It was so smooth I couldn’t believe it.

The next was make a key to the rest of the paint and undercoat, ready for my high fill primer. This was shaken well and truly for about five minutes, when I started I didn’t think there was a ball in there at all, it was that hard and settled the paint it needed some work before it could be used. It soon worked loose and was able to be sprayed. Hycote recommended thin layers allowing 5 – 10 minutes apart between each spraying. I followed this to the letter. I got a nice coat, no orange peel, but I did get some dust settle on the paint. Grrrrr. But nothing that a little fine wet and dry wouldn’t sort out.

The filler and the sanding down made a mirror like finish. I know that the deep fill primer was never going to be as smooth as that, so I am expecting to do a little more wet and dry to make it silky smooth again. I managed to fill the dent, cover the stamp marks, remove the little rust and make it like new again.

It sounds funny that is such a short process to explain, but the main part was the filling and sanding, which I have linked in a couple of places. The hard work pays of with plenty of patience and getting the details right. 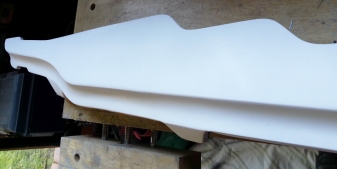 I am delighted with the results to be honest, even if I do say so myself, which I do, and I did!