In the UK we moan about bad weather then we moan about hot weather. Me I love the hot weather and it makes a change to have a few days of nice weather. The only bit I’m not to keen on is when the multitude of bugs decide that my flesh is A la Carte on the menu, prime nose bag material. Everything that can bite has tried to take lumps out of me all weekend. Still at least it’s warm and not chucking it down with rain. Friday I had my bags packed and ready for the start to Mustang Maniac. Earlier in the week I had a cryptic message sent to me by Adam to say they had a surprise for me. Saturday and I was out the door in record time and everything was goin’ great guns until I was about six miles from Mustang Maniac. A country lane had a tree that had come down from the storm early in the mornings and partially blocked the road, note the word partially. The point is I pulled up to get by and the police car that was there had parked across the road so nobody could get past. Now, anybody with a little sense would have moved some of the branches out the way with a borrowed saw from one of the houses opposite, cut a few away, then traffic moves again, nope, not this clown. He just stood at the back of his car swirling his finger in the air like he was stirring a cup upside down with his finger. I think this was his Neanderthal attempt to signal me to turn around, I wouldn’t want him to walk or verbally communicate or anything. I sat there for a while and so this lunatic just stood there, the neighbours were now out in force and all looking at said tree and fine figure of authority who had all the gear, but no idea! When I say tree, I have seen bigger indoor Christmas trees if you get me? The plus point is was sitting comfortably in my airconditioned car and this herbert was standing in the heat with his hat on and high vis jacket. So, it was inevitable that I had to do a seventeen point turn in the road which included collecting some hedgerow in the rear bumper while I was at it. I had to go all the way back where I had just come from and go the long way round, it took me what seemed like an age to get to my final destination. I parked up at Mustang Maniac and was greeted by Adam who took me straight to my car, the surprise was obviously to do with my car. Adam showed me the work Al or Yogi as he is known, had done to my car. A lot of the holes had been welded up, the old rotten floor support brackets were taken off and the new ones put back on. The rear chassis leg was repaired and the hand brake bracket put back in place and the holes around it repaired. Yogi had done some brilliant spot welds that I liked so much I left them on there as a feature to be seen. The attention to detail is amazing, as I knew it would be. Yogi had taken some pics for me so thanks to him and Mustang Maniac for letting me use them. 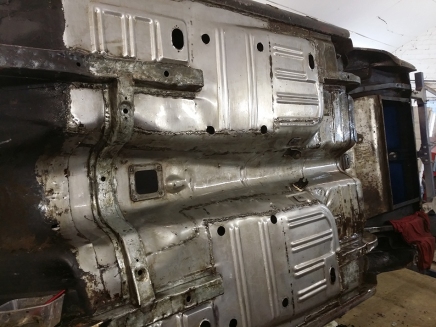 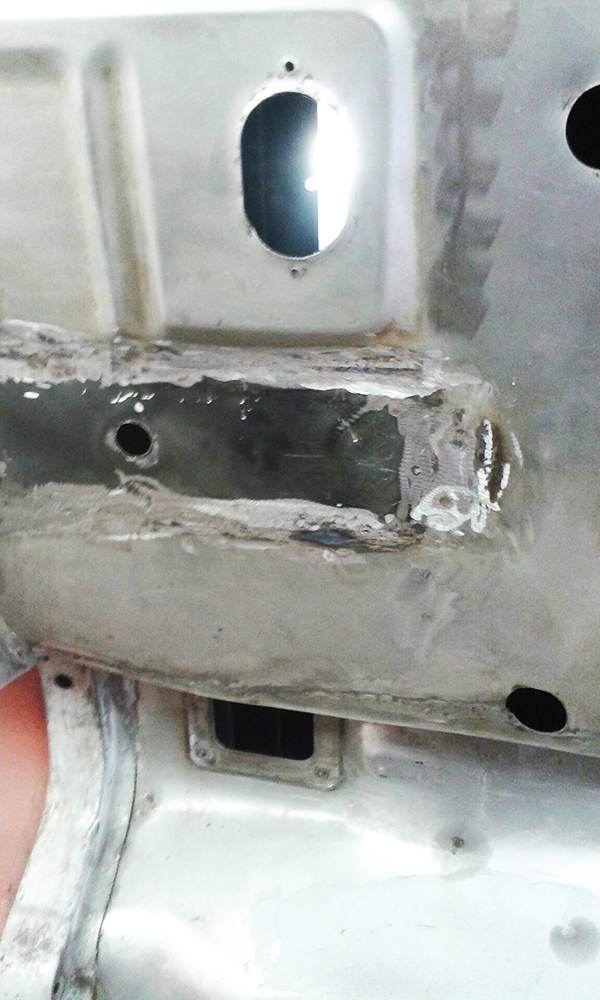 welded up and re-ground

The bodywork on the inside of the supports was in good condition and needed no additional work. The area was carefully marked up and a single support was changed at a time. The guys were happy nothing moved and continued to fix the supports in place. Check out Yogi’s spot welds that were just to good to grind down or cover up, they were different and I wanted them to stay. 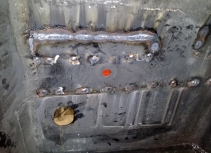 Spot detail at the front of support 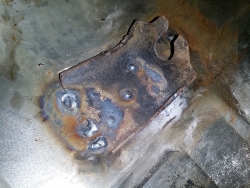 With the parts welded in place Yogi gave the floor and welds a generous helping of filler. which was soon to be rubbed down by me.

By the time the filler had been rubbed down I looked a little white should we say. The Dewalt sander had gone through my supply of 80grit discs and made light work of getting it down to almost smooth. I didn’t worry about the very fine grade as the slightly roughed up surface gave the red oxide a good key point. I used my angle grinder to then go over the pans one last time to remove any hint of surface rust. Here was where my second surprise got me, after about ten minutes the angle grinder suddenly got warm, ground to a halt and flames were licking out he front of it like a dragon with a bad cough. I was wearing welding gloves and goggles so I put it on the floor rather quickly and unplugged it, it was left to fizzle, crackle and smoke having its own little melt down, literally. What do you expect from a cheap angle grinder? I am surprised it lasted this long. Adam did say to me it wouldn’t last long, he was right. 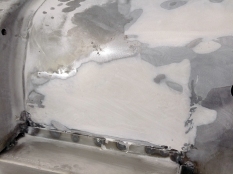 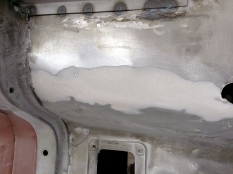 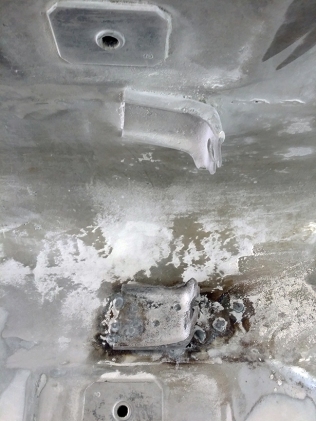 note the build up of powder 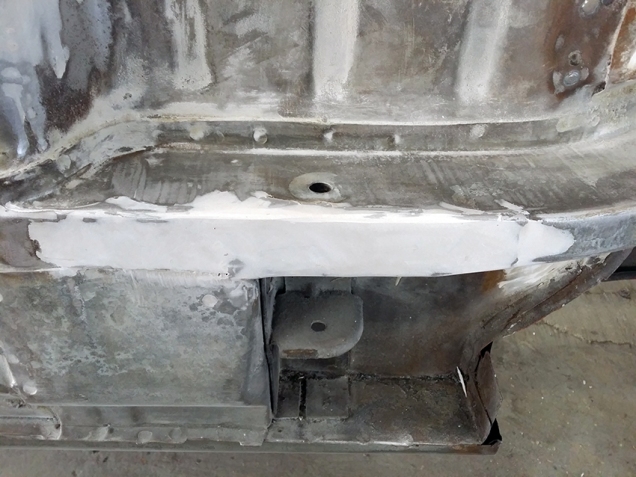 With everything wiped down, dusted and cleaned up with thinners I then started work with the red oxide to the point where I had got to with the angle grinder. I think you will agree it has made a huge difference. Once it has come back from paint the underside will be coated with some stone chip in black to protect it even more. 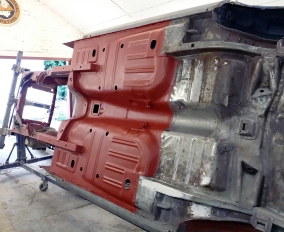 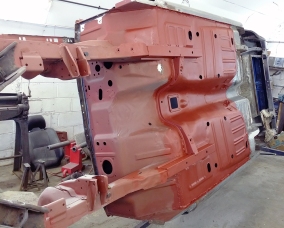 After the angle grinder had cooled down I tried to move it, all moving parts had welded themselves together by the feel of it. Guess what is going in Adams scrap pile?

Sunday was a day I usually do a bit in the man cave. Today I was asked to hang a garden gate, fix a fence panel and couple of other little jobs. So I didn’t manage to get stuff done that I wanted. The only thing I managed to do was clean up my sander and put it away. Oh, I did order a new angle grinder so hopefully it will be here by the time I go back next weekend.

I'm just a man with a Classic 1966 Ford Mustang Coupe and a collection of tools that just keeps getting bigger in order that I could do the job right. When I first started this blog this is what I wrote: "I had bought a project car, that had been neglected, set fire to, rusted and abused. As a result of that she needed a bare metal strip down, a nut and bolt restoration." Four and a half years later the car was completed, on the road and shown at the UK's premier Classic Car Show, everything that was done to that car is documented here. I now have the privilege to drive one of America's most recognised cars and a true Icon, the Ford Mustang. I'm still sane after the blood, sweat and tears, so would I do it again? Oh yes!
View all posts by One man and his Mustang →
This entry was posted in Car, General, Photo's and tagged angle grinder, chassis, filler, floor support bracket, hand brake bracket, Mustang, Mustang Maniac, One man and his Mustang, Red Oxide, welding. Bookmark the permalink.