The weekend arrived and I was tired, dead to the world. There is no alarm set at the weekends just for the sake of it, we enjoy our time to wake up slow talk and work out the weekend plan of action. I normally leave the house by half eight to get to Mustang Maniac, but this time we didn’t wake until almost nine. All I can say is we both must have needed the sleep. I got up showed, dressed and left without breakfast. I got in the car and looked for to my trip down to see the guys. Unfortunately as I arrived near Duxford air museum the world and his mate was going the same direction as me. The roads were coned into a single lane in order to filter us down to the entrance. I must say well done to the brain surgeon that decided to send all traffic the same way even though I didn’t want to go there. Hardly the loudest bang in the firework box should we say! Unfortunately I have to go past the main entrance to get on the country roads to Mustang Maniac.  The main problem I had was that there were people standing in front of my car trying to direct me into the airfield car park. When I asked them to get out of my way so I could get past, they got the hump with me for not wanting to go in there – get over it! Not everybody wants to see planes, just as not everybody wants to restore a car. I eventually turned up at almost eleven, this delay was cutting into some serious resto time. I was not a happy bunny.  But as promised, the first thing I done was to take some more pictures of the car from last week and the work I have done this weekend. I painted the front of the car now except for the small parts that need a little mig welder work to fill the holes and the battery section of the inner wing. We will take the plate out and work out if we need to replace the whole inner fender or not. The other part that has not been painted on the front is the radiator cooling grill to the upper right side. The grill was patched up with filler previously and was very brittle, so we will now have to replace that little section too. So, rather than show a few similar looking pics, I have added the completed front end over the last couple of weeks and the end results. I think you can see more of change that has taken place this way.  I even tried my hand at a little impromptu panel beating. The radiator opening at the front had a few wavy edges so I got a flat faced hammer and a sturdy flat block behind the metal and give it some therapy. Boy did that feel good, my mind wandered to other things that were bugging me over the last few days as I was doing that little bit. 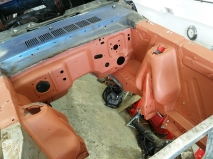 Sunday was a day for cleaning of the steering mechanism. This was the usual remove grime, remove paint and remove rust. I have a link to all the pictures here or go to the Photo Menu – Steering – Steering Linkages Recondition for the full step by step pictures so far. This was a probably the most grimy job I have done to date. Now that the parts are cleaned up I will go over them with the wire wool and make sure they are ready for paint nearer the time. A little detail on them in black and some silver highlights sounds good to me. The cleaned up parts look a little shiny or wet as I have just coated them with Gibbs Brand in order to stop them rusting.

Just a couple of how it was: 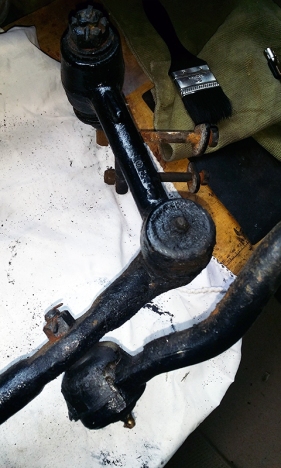 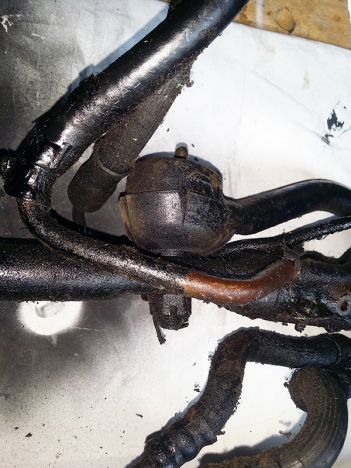 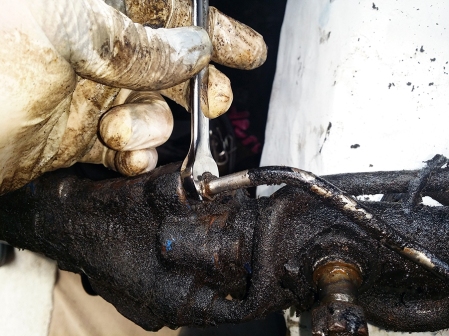 How it is now: 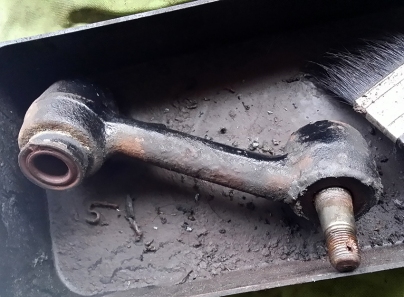 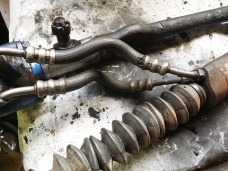 In order to keep an eye on the parts and where they all go I have used some diagrams and my manuals of course. What I have done is I have compiled a selection of the most helpful Steering and Suspension Diagrams onto a single article that can be found here, just like my brake diagrams I compiled. I hope they are some help to you; As the parts are so integral to each other I decided to keep them together rather than split them up.

I'm just a man with a Classic 1966 Ford Mustang Coupe and an ever increasing collection of car detailing products to keep it clean. When I first started this blog this is what I wrote: "I had bought a project car that had been neglected, set fire to, rusted and abused. As a result of all that the car needed a bare metal strip down, a nut and bolt restoration." Four and a half years later the car was completed, on the road and shown at the UK's premier Classic Car Show, everything that was done to that car is documented here. I now have the privilege to drive one of America's most recognised cars and a true Icon, the Ford Mustang. I'm still sane after the blood, sweat and tears, so would I do it again? Oh yes!
View all posts by One man and his Mustang →
This entry was posted in Articles, Photo's and tagged gibbs brand, idler arm, Mustang, Mustang steering and suspension diarams, One man and his Mustang, paint stripper, rust, Steering diagrams, steering ram, suspension diagrams. Bookmark the permalink.