The past quickly and the tiredness from lack of sleep due to our hot weather always seems to vanish when it’s time to go to Mustang Maniac. The trip was a lot longer than normal due to the fact that my normal run was traffic controlled due to a big airshow at Duxford war museum. I arrived nicely chilled thanks to the aircon being on full blast. The guys were cleaning the yard and Chris’ car was about to get a new home. Chris is about to follow in the same footstep and restore his 66′ coupe i6 that he wants to use as a daily run around. Good for him to be able to enjoy it everyday, and that’s exactly what it should be. Not a trailer queen never to be enjoyed.

Anyway the plan for today was to fit the main door windows and align them up near enough ready for the door rubbers to be added soon. The windows is really a two-man job and Yogi gave me a hand to get them in the door. First job was to remove the rollers from the window rails as they would be snapped into place on the window itself. Inserting the window is a case of front end of the glass goes in first at a forty-five degree angle until about two-thirds of the way in. Slowly straightened up the glass moving forwards and slipping the leading edge into the guide rails at the front quarter windows. This will allow the back edge of the glass to slide into the rear rail. With the glass now straight slide the rollers into the bottom slide rail and align the winder mechanism to the rollers and snap into place. 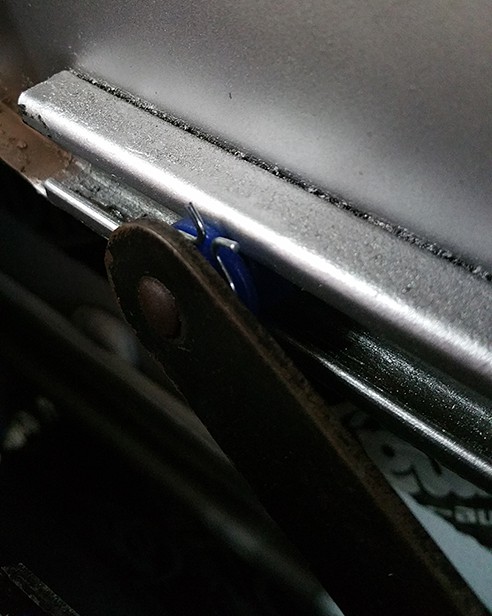 There are not many pictures as we had to hold the glass and nobody was around to take them for me at the time. Once the mechanism was wound a couple of times Yogi got to work and started to adjust the windows. This is a tricky job and takes a while as the front quarters and rear quarters all have to align to the window glass and sit properly in the door shuts. Yogi did it about twenty minutes and just buzzed around bolts and allen bolts to align the passenger side up. I learnt a lot from watching and thought I had it in mind what he done. We both swapped to the driver’s side and fitted the main glass into the door. Then it was my turn to align it all up. let’s just say it took me a lot longer than Yogi. I got the rear right and the front wrong or, front right and the rear wrong that would overlap the main window! I just kept adjusting things to see what they did and slowly did little bits at a time. The time (hours) flew by. Eventually I got it pretty close to what Yogi and felt pleased with myself. Not much can be shown for my time at all, except that glass is in the door. Adam told me that it can day a day to fit and align glass up, even for those guys! Yes, I know the windows are filthy dirty, I will clean them up next week with some of the wife’s glass cleaner which I forgot to take with me this week. 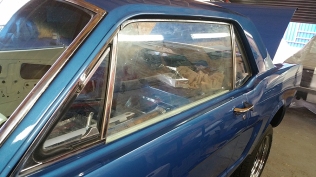 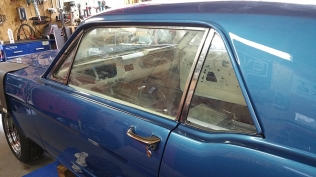 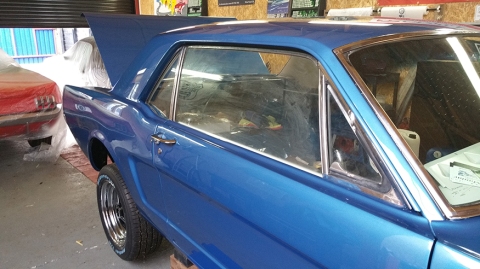 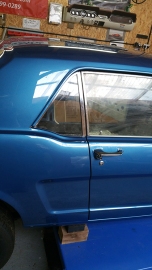 Adam had his delivery of some Monte Carlo bars that I was after, which he brought down to the workshop to fit with me. The bar has a curve in it at the front ready for the air filter I am going to have. I had a choice of stainless, chrome or satin black. I went for the satin black to match the rest of under the hood. There are two bolts missing at the top of the bar hat bolt to the body, they are custom-made to match the export brace bolts. They are due to arrive by the time I go and play next week. 🙂 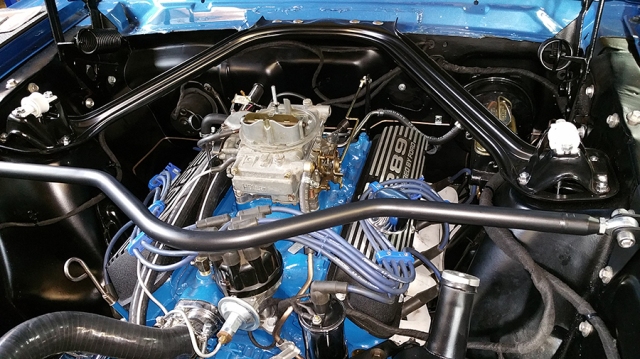 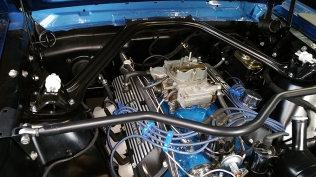 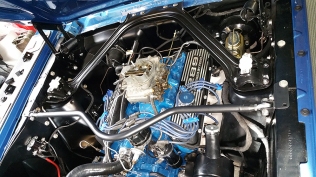 By this time the day was done, but I was given some homework. Adam asked me what I wanted to do with the rear parcel shelf. I said I will have what ever they had at the time. Most of the time they are car coloured, or have been modified for a pair of rear speakers. Adam said how about something bespoke that you can make. I was listening intently now. Up in Adams stores he had an old damaged head liner same as mine that couldn’t be used. So he said how about wrapping the shelf with the headliner. Great idea so I took it home with me. The first thing to note is that the headliners are easily creased and take a fair bit to straighten them out after they have been packaged. I opened the liner up and selected the part of the roof liner that I use and laid the shelf on it. I marked around it roughly and cut it with some scissors. Don’t tell the wife though. 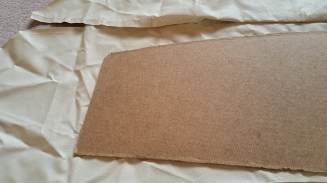 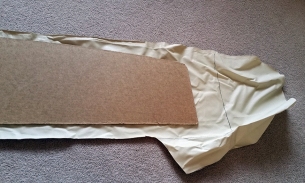 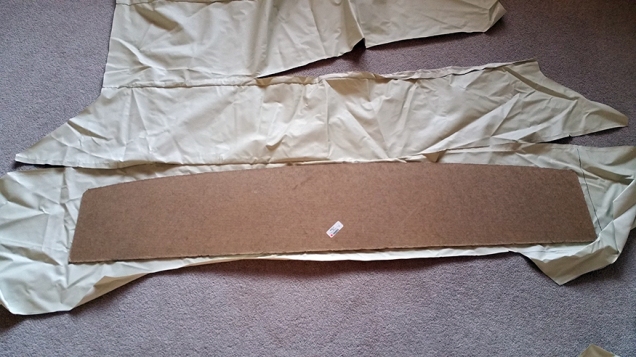 Next was to stick the material to the board. I used some spray on impact adhesive and done little bits at a time smoothing out as much as I could of the creases using a hair drier to warm it all up and expand the material. again, don’t tell the wife about that bit either. 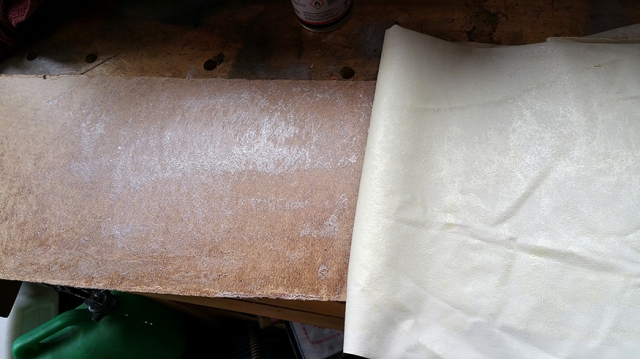 With the front completely covered I then pulled and stretched the reverse and stuck that down too. 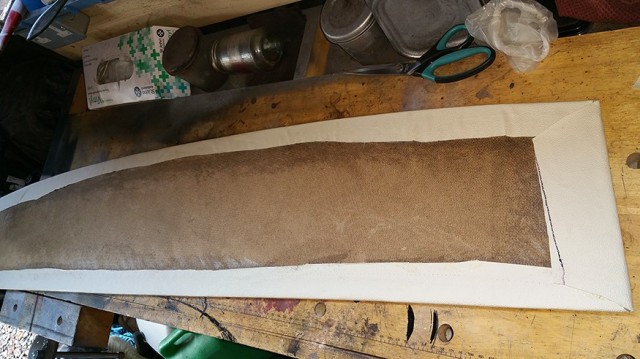 The end result I’m really pleased with. A parcel shelf that matches the head liner and will look like it continues all the way down the back. I haven’t seen this before on a car, but I am looking forward to fitting it I must say. The pictures don’t do the project justice, but you can get the point though. 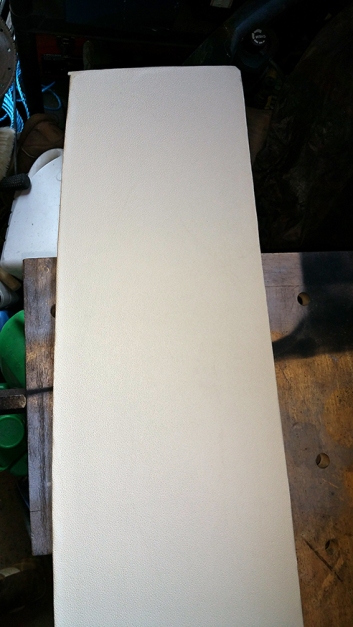 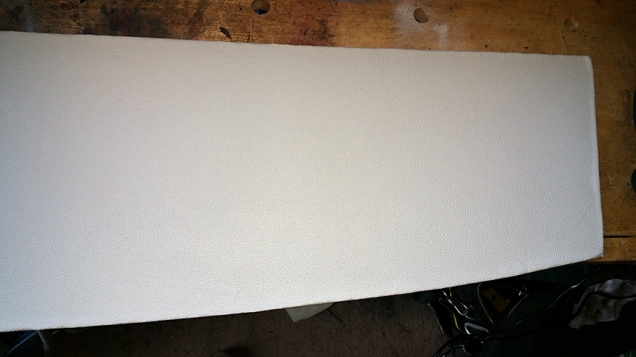 The most difficult part of this was trying to keep the glue of the material that I managed to get all over me, and the hair drier. I will give you some tips here:

1) Use WD40 to remove the stickiness from your fingers, it works.

2) Clean up the hair drier and place it back in the same place you got it  from.

4) Make sure you know how long the wife “pops” out for before using her stuff.

I'm just a man with a Classic 1966 Ford Mustang Coupe and an ever increasing collection of car detailing products to keep it clean. When I first started this blog this is what I wrote: "I had bought a project car that had been neglected, set fire to, rusted and abused. As a result of all that the car needed a bare metal strip down, a nut and bolt restoration." Four and a half years later the car was completed, on the road and shown at the UK's premier Classic Car Show, everything that was done to that car is documented here. I now have the privilege to drive one of America's most recognised cars and a true Icon, the Ford Mustang. I'm still sane after the blood, sweat and tears, so would I do it again? Oh yes!
View all posts by One man and his Mustang →
This entry was posted in Car, Photo's and tagged Door glass, headliner, impact adesive, monte carlo, Mustang, Mustang Maniac, One man and his Mustang, rear quarter windows. Bookmark the permalink.

6 Responses to A Sticky Situation