Hot Of The Press

You may remember that I helped Mustang Maniac out at their local car show at Enfield Pageant of Motoring 23 – 25 May this year. I was there with the usual loyal customers and good friends of MM. We all had a great time and spoke to lots of guests about the cars we bought along and all about repairs, parts and restorations. My car was there as an exhibit to show what it’s like to be part way through the nut and bolt restoration process. It turns out that “Classic American” magazine were also there covering the event and taking some pictures. It turns out that one of those pictures was of my car. My wife treated me to the annual subscription to the American Classic magazine as a birthday present a little while ago. The subscriber magazines arrive about a week ahead of officially hitting the shops. As usual I unwrapped the August edition of the magazine and assumed the position on the sofa. A habit of mine is that I just start flicking through the pages in order to work out what I was going to read first. I turned a number of the pages and when I got to page 70 I saw my car, in print. A full-page write up of the event and half of that page is a photo of my cherished car. I was so excited that the wife jumped out of her skin as I yelled out “Yes – my motor”. She wondered what the fuss was all about, she soon found out as I wedged the magazine right in front of her face as she was watching some TV. I think she got fed up with the fifth or sixth viewing of the article. 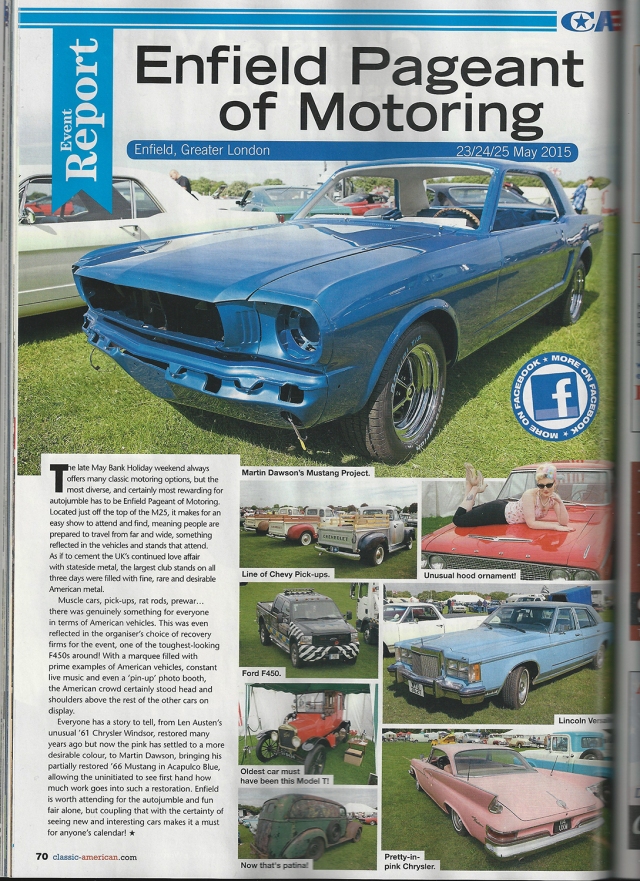 Some pics again of the Enfield Pageant 21-23 May 2015 on the Mustang Maniac stand. 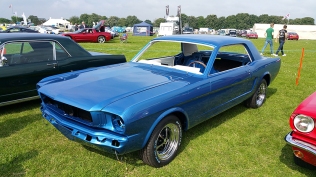 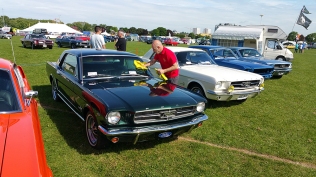 John moving her around

Of course I can’t take credit for it all on my own, I have had help to get this far. So, it’s a big thanks to Adam and all the guys at Mustang Manic for getting me where I am today. Let’s hope there are more pictures to grace the pages of magazines in the future. It would be nice of course, but not to be expected or taken for granted.

I'm just a man with a Classic 1966 Ford Mustang Coupe and an ever increasing collection of car detailing products to keep it clean. When I first started this blog this is what I wrote: "I had bought a project car that had been neglected, set fire to, rusted and abused. As a result of all that the car needed a bare metal strip down, a nut and bolt restoration." Four and a half years later the car was completed, on the road and shown at the UK's premier Classic Car Show, everything that was done to that car is documented here. I now have the privilege to drive one of America's most recognised cars and a true Icon, the Ford Mustang. I'm still sane after the blood, sweat and tears, so would I do it again? Oh yes!
View all posts by One man and his Mustang →
This entry was posted in Articles, Car, Photo's and tagged Classic American magazine, Enfield Pageant 2015, Mustang, Mustang Maniac, One man and his Mustang. Bookmark the permalink.

9 Responses to Hot Of The Press