My first trip of the year in my car was fine, but I had a few scary moments there and back. There were idiots with no consideration slicing across the front of my car, the other was to avoid all the trenches or pot holes in the road. The roads in the UK are complete joke right now to be honest after the snow, sun and rain. I think that I compressed my spine by an inch and shook a filling out my tooth due to all the mega craters in the road. I guess that’s what you get when stiffen the suspension in order to make the car handle a bit better.

During the round trip I had a thought to myself wondering if these people realise what us Classic Car owners are thinking while we drive along? So, I had a little fun and came up with this little list in my head then wrote it down before I forgot it;

I hope I haven’t missed anything and made a few people smile and say – “yep that’s me!” If I have missed something that needs to be on this list, please let me know and I shall amend it. Although this is a little bit of fun, there is also a serious note to the points too. When I see any Classic Car on the road and I am in my daily workhorse car; I give them plenty of room now.

I just couldn’t do a post with no picture of a car that wouldn’t be right. 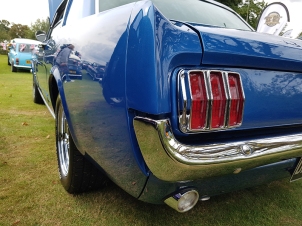 I'm just a man with a Classic 1966 Ford Mustang Coupe and an ever increasing collection of car detailing products to keep it clean. When I first started this blog this is what I wrote: "I had bought a project car that had been neglected, set fire to, rusted and abused. As a result of all that the car needed a bare metal strip down, a nut and bolt restoration." Four and a half years later the car was completed, on the road and shown at the UK's premier Classic Car Show, everything that was done to that car is documented here. I now have the privilege to drive one of America's most recognised cars and a true Icon, the Ford Mustang. I'm still sane after the blood, sweat and tears, so would I do it again? Oh yes!
View all posts by One man and his Mustang →
This entry was posted in Articles, Car, Driving my car and tagged Classic Car Code, cleaning, Mustang, One man and his Mustang, paint jobs, stone chips. Bookmark the permalink.

40 Responses to The Classic Car Code