Cars On The Green

Over the weekend I attended perhaps my favourite car show, Cars on the Green in Bury St Edmunds. Sunday morning I looked out the window and there was a tiny few specs of rain. Now I don’t take the car out in the wet in case it shrinks in the water. So I waited for a while before I made the decision to go. I arrived some twenty minutes later and I almost had to put the wipers on and was uttering the odd colourful blue words at the rain. It must have done the trick as the sun showed itself as I pulled in to the show.

There was some great cars there and it’s always a nice atmosphere at this show. I was on the Bury Retro Car Club stand (patch of grass) shared with some great people from the club too. I took up station under a tree unfortunately, which was leaking sap like water through a cheese grater. So much so, that as I was sending a message to my wife I could feel the sap on the phone screen.

I always give the car a quick spray with some ‘quick detailer’ to take off the dust from the road just so the car looks her best while on show. With the sap falling like it was, I decided not to touch the paint in case I damaged it. Yes, I always carry (a lot) cleaning products, but in the location where I was it would have pointless to try to keep clean. So with a heavy heart I let the car get dirty, well what I call dirty anyway. 😦

The public was allowed into the show from ten in the morning onwards, it was great to see lots of Dads on Father’s Day with their little ones for the day. I think I may have spotted the odd spouse or two who was, erm – not into cars should we say! I started my slow stroll around the massive venue and took some pictures of the cars that caught my eye. I tried to limit myself for the number of pictures otherwise it’s just picture overload. I will start with some UK cars which are starting to command some quite serious money now.

Then some good old American Muscle. 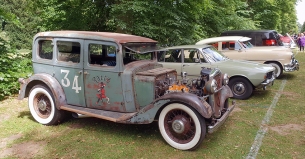 The Cars on the Green show is classed show for all cars, classics, modern, vans, trucks, modified and new, all of which were well represented. On a side note I have spotted over the last few shows that I have attended, there are a few almost new cars creeping into the classic car events. Now I am petrol head and love cars, so if somebody wants to show their car then fine with me. But, what is the point of taking a two-year old Volvo (example car), that is plain standard stock and parking it next to a genuine classic car. Perhaps that is such a controversial thing to say, and I certainly don’t want to offend anybody. I can sort of understand it, the car show scene is full of great people who always seem to help each other out when another car is in trouble. 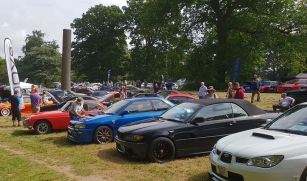 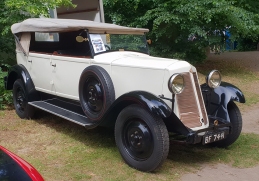 Perhaps when the organisers of the events say “classic car show” the cars should be at least fifteen years old? What do you think? That way I can get to see more of the old cars that I personally go to see. I really hope that I haven’t upset anybody with that statement, it wasn’t my intention to do so. Perhaps I need to wind my neck in?

Back to this show, there was a couple of live bands and singers, fairground rides for the children, plenty of food stands and stalls for all things cars and couple of random ones as well nothing to do with cars. Lots of people turned up for the day along with a number of seriously well-behaved dogs too.

Perhaps my favourite pic? This one, where the Land Rover stand had an electric toy version of their vehicles for sale. This little lady just loved it and the guys all to their credit let her stay in it for a while. Well done guys, I think they made that little girl’s day.

After my walk around I sat back in the comfy chair and watched the world go by and had some great conversations with people I have been talking to via email; hi Simon!

I can’t wait for this weekend as it might be two shows, Saturday and the Sunday.

If it doesn’t rain of course.

I'm just a man with a Classic 1966 Ford Mustang Coupe and an ever increasing collection of car detailing products to keep it clean. When I first started this blog this is what I wrote: "I had bought a project car that had been neglected, set fire to, rusted and abused. As a result of all that the car needed a bare metal strip down, a nut and bolt restoration." Four and a half years later the car was completed, on the road and shown at the UK's premier Classic Car Show, everything that was done to that car is documented here. I now have the privilege to drive one of America's most recognised cars and a true Icon, the Ford Mustang. I'm still sane after the blood, sweat and tears, so would I do it again? Oh yes!
View all posts by One man and his Mustang →
This entry was posted in car shows, Driving my car, Photo's and tagged American Muscle, Bury Retro Car Club, car shows, classic cars, dogs, Father's day, ford, ford mustang, Mustang, rain, sap, tree sap. Bookmark the permalink.

4 Responses to Cars On The Green