Tool Kit At The Ready

Last weekend was a double car show, firstly there was an all weekend event at the Ipswich Festival of Wheels, and the other was at Helmingham Hall on the Sunday. Saturday was no problem as I would be at the Festival of Wheels and the Sunday could be FoW again or Helmingham. So I was going to choose at the end of the day. The Bury Retro Car Club had a stand for both days at the FoW, well it was more like a marked out bit of land to be exact. I was unsure of the exact time it started so I decided to get there earlier rather than later. I rocked up to the main gates at about eight thirty in the morning and it was pretty quiet.

I was directed to the area and parked up.

A little while later I was joined by some more of the club members and I felt relieved that I was not the only one. The guys were camping there over the weekend and nice atmosphere throughout the, I even managed to sit by the side of the camper van with a pretty awesome awning to stay out of the sun.

We were in the allotted area next to a Mustang club as well, which was quite nice, although it wasn’t filled to capacity either.

This was the first show of this type and it was obviously aimed more at the family rather than the out-and-out enthusiasts from what I could see. There was plenty for the younger ones and the event was nowhere full. Perhaps everybody was waiting for the Sunday as seems to be case for these all weekend shows. By about ten in the morning the place was as busy as it was going to get so I set of for some pics. 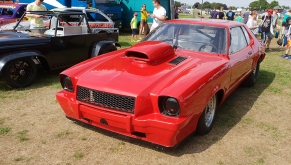 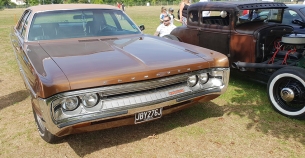 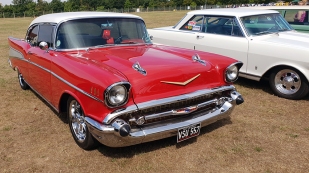 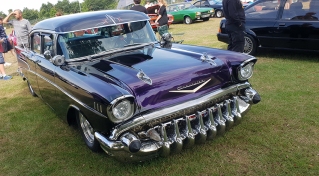 There was racing influence as well from the Speedway and stock Cars which Ipswich is well known for.

There was a nice selection of trucks and vans from the UK and the USA, the Transit with hundreds of glowing and pulsing LEDs took my eye.

OK there was a huge USA rig that was transporting a great idea of motorised small version trucks for the little ones to ride in as well as the dads to accompany their kids.

There were a few fast UK Fords to be seen, many of which are starting to command some serious money to buy one. 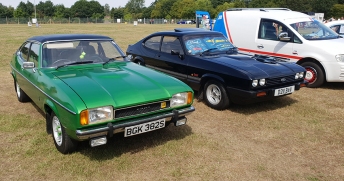 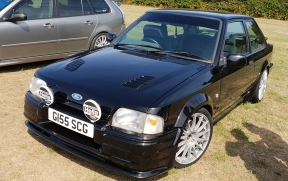 A promise of some ‘Super Cars’ and ‘Film Cars’ were to be on show as well, I only spotted one of each, perhaps there was more on the Sunday. 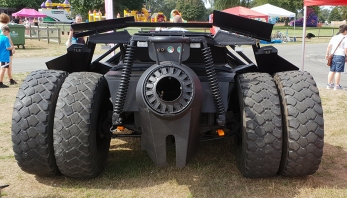 One car that was getting a lot of attention was this Ford Popular, all chrome and was allegedly driven there from a Kent to Suffolk and “not trailored here”, a distance of around one hundred miles or so. There was not a spec of dirt on it anywhere, not even in the tyre grooves, let alone how he managed to carry all the mirrors and equipment with him as well. Maybe a convoy down to the show but he seemed to be on his own. What do you think?

Back to my main story, during the day I had a guy talking to me who had just bought his red ’68 Mustang Coupe and he explained that it needed a little bit of work doing to it. We chatted away for about thirty minutes or so before he had a look around the show. About an hour or two later he came back to me with a couple of guys with him and he looked worried. He asked me to borrow my key to open his trunk as he had locked his keys in there. The car was open luckily and I explained that my ’66 key was a different design. He was now starting to stress a little and I said don’t worry we can get into the trunk. I took out my travel tool kit and we walked to his car, where I explained to take the seats out and the card backing behind the seat back he should be able to reach in and get the keys. His friend helped him take the out seats and used my tools for the nuts and bolts that needed to be undone. A few minutes later the keys were located and all was good in the world again.

The decision was simple and the end of the day, I was going to Helmingham Hall on the Sunday where I took more yet more photos. I will post those pictures later in the week.

I'm just a man with a Classic 1966 Ford Mustang Coupe and a collection of tools that just keeps getting bigger in order that I could do the job right. When I first started this blog this is what I wrote: "I had bought a project car, that had been neglected, set fire to, rusted and abused. As a result of that she needed a bare metal strip down, a nut and bolt restoration." Four and a half years later the car was completed, on the road and shown at the UK's premier Classic Car Show, everything that was done to that car is documented here. I now have the privilege to drive one of America's most recognised cars and a true Icon, the Ford Mustang. I'm still sane after the blood, sweat and tears, so would I do it again? Oh yes!
View all posts by One man and his Mustang →
This entry was posted in car shows and tagged car show, Ipswich Festival of Wheels, Mustang, One man and his Mustang. Bookmark the permalink.

8 Responses to Tool Kit At The Ready