After a wait to see how the products performed, I have some results.

Well the weekend is almost over and I have been busy rubbing down and doing little bits in the car. One of those little jobs is the wrapping of the the under dash wires with black insulating tape to make it look stock. I find that job therapeutic, just like some people find gardening or painting as a therapeutic activity. Am I weird? Any other strange therapeutic stuff people do? Anyway, my other cars have been feeling neglected and so I just had to wash, wax and valet them. As a result I feel as though I have been arm wrestling with Arnie  – The Terminator. I ache, and before you say it – I know quit moaning.

The main point of this post is to say that I have some preliminary results for my rust comparison tests, they are a little controversial I think. I had taken the two big guns and put them in a head to head just like Practical Classics magazine did. But this was my own money that was funding this and I wanted them both to be exactly the same. But, my results are the exact opposite so far of Practical Classics results. The two main contenders are Rustbuster – fe-123 and Granville – Heavy Duty Rust Cure. They cost pretty much the same, look the same and even smell similar. But do they perform the same? Simple answer is No. Practical Classic magazine stated that the Rustbuster fe-123 was the winner. However, they were incorrect with their details on how they applied one of the products for their tests. I have explained this fully in the comparison test, the quick link is below for the Practical Classic test and my tests. I had previously purchased from Frost Auto Restoration Techniques the Granville Rust Cure and wanted to see what this new “winner” was all about. So I found an old inner fender splash guard from my Mustang that was really rusty. I applied the products at the same time on the same material. The video was then uploaded to my YouTube channel, One man and his Mustang. This weekend I have taken another video, part 2 and posted that on YouTube as well. The results are very clear that the Granville wins hands down. The Rustbuster was flaking up, peeling and shows signs of the rust reappearing after only a few months. I am very disappointed with the “winner” and its surrounding hype. I have various videos of the Granville in action too on the YouTube Channel.

I bet there will be people out there moaning and complaining about my results. But I have photo evidence and videos of the tests and results. As yet I have not seen any results from similar tests or company. I was going to review the Rustbuster as a separate product on my blog, but I don’t think I will bother now as the results are here. Anybody else like the Granville Heavy Duty Rust Cure? Or is there something even better. I know about POR15 but that is not recommended for the outer bodywork that is ready for spraying, and that came from the POR themselves. 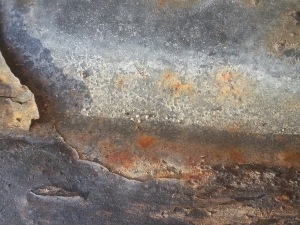 On another note does anybody have a good primer they would recommend preferably available in the UK?

I'm just a man with a Classic 1966 Ford Mustang Coupe and an ever increasing collection of car detailing products to keep it clean. When I first started this blog this is what I wrote: "I had bought a project car that had been neglected, set fire to, rusted and abused. As a result of all that the car needed a bare metal strip down, a nut and bolt restoration." Four and a half years later the car was completed, on the road and shown at the UK's premier Classic Car Show, everything that was done to that car is documented here. I now have the privilege to drive one of America's most recognised cars and a true Icon, the Ford Mustang. I'm still sane after the blood, sweat and tears, so would I do it again? Oh yes!
View all posts by One man and his Mustang →
This entry was posted in Articles, General, Reviews and tagged bodywork, comparison, FE-123, Frost, Granville, heavy duty rust cure, Mustang, por15, practical classics magazine, primer, rust, rust comparison test, rust cure, Rustbuster, test, test results, wax, YouTube. Bookmark the permalink.