Cars On The Green

The weekend just gone was host to a car show called “Cars On The Green” in Bury St Edmunds, Suffolk. I suppose I could say it’s my most local show. I haven’t visited this show before and it was all new to me taking my own car there this time. The early planned start was not to bad as you had to be there between seven and ten in the morning. First things first – is it raining? Nope. Check the forecast, will it rain? Nope. All systems are go then. I had everything already packed in the trunk the night before, the mandatory fold up seat, jacket, jump-start mini battery pack (see here for the review), can of oil top up, cleaning items, detail products , bag of microfiber cloths, business cards for my blog. That only left the food and drink to go in the thermos bag when I got up.

The journey there was fantastic and the sun was warm the window was open, but the main road out of the village was resurfaced the night before and the stones were dragged down the road. When I say resurfaced, I use that word with the very loosest of connections possible, the lazy articles had just dumped a load of stones on the surface, spread it about a bit and wait for the cars to squash it down. There was no way that I was going to pick up stones in my tyres get on a motorway and flick them up to damage my paintwork. So I just had to turn around and go out the longer way round the village. A real shame as the small roads echoed the rasp of the exhaust note; it was an early morning wakeup to everybody who wasn’t now going to be getting a lay in, but what a start to the day. After twenty minutes or so I arrived at the venue and was eventually directed into the fields. My car was an individual entry so it was parked under a lovely bank of trees. The setting was pretty awesome, although I wasn‘t too impressed with the trees as a canopy overhead. There was a good possibility of bird’s wanting to relieve the contents of the bowls all over my motor, and on top of that it would be mixed in with the falling tree sap. I parked up reluctantly and wandered around to look at the other cars. I was the only classic Mustang there that day, it was nice to be different among the maximum of one thousand cars allowed.

I meet with a mate of mine Craig who was there in his Honda Integra which is becoming a little more of a collectible item now being a Jap spec import. I spotted to young lads cleaning their dads truck and enjoying it, they even demonstrated how well it revved up. I did promise these two little guys I would put a picture up for them. Promise kept. 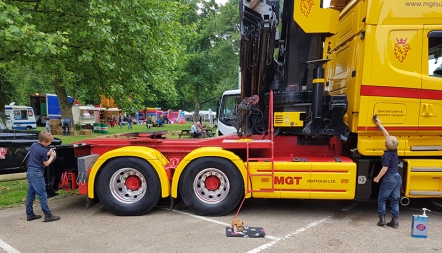 We had a good wander round and had the phones tuned into the Le Mans race. Ford had four of their Chip Ganassi GT40’s in the running. One of those cars was leading with two hours to go. We had a look in all the fields and designated parking areas, we found a fantastic array of cars. There was old next to new, rat rods next to highly polished new cars, club stands and rare cars. 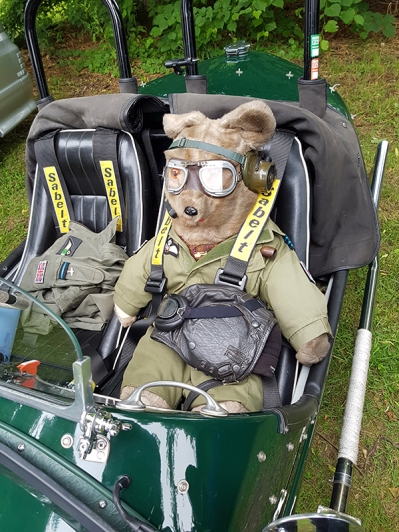 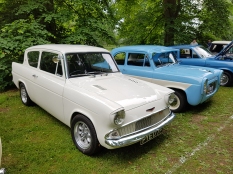 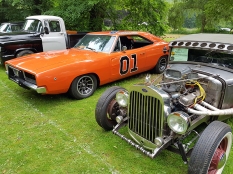 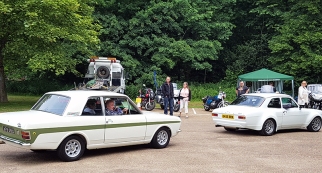 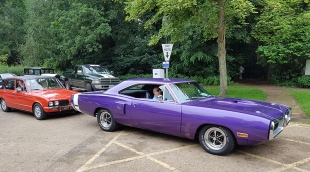 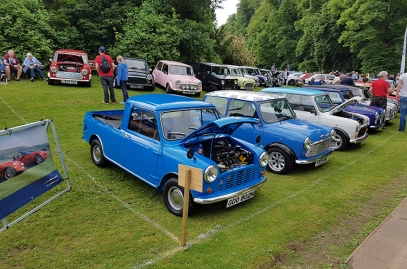 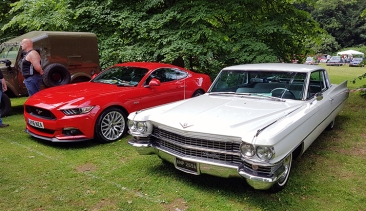 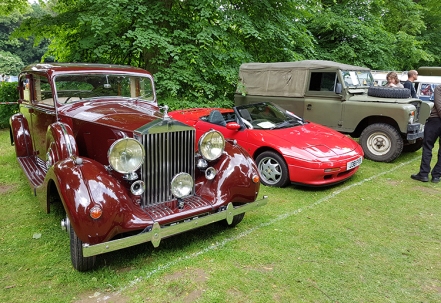 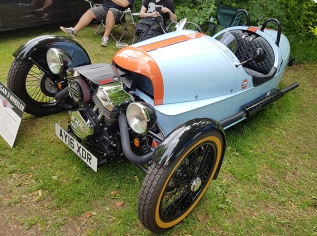 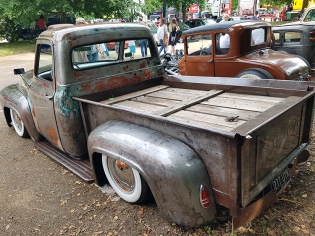 We eventually made our way round the whole lot of cars and I went to pick out the chair from my trunk. I was pounced upon by a real nice bunch of guys who were asking some great questions about my car. How long did it take? What did I do to it? How much did it take to do? etc. I even let one of the guys sit it. They wanted to hear it run, so I just had to start it up, such a poor excuse I know, but it is a car show after all. 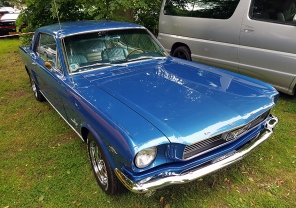 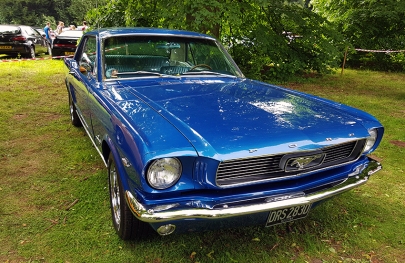 I noticed that the paint work was not silky smooth to the touch now as it usually is; it was getting tiny sticky sap particles on the surface of the paint. It was going to have to be cleaned off which was going to be a real pain as it was now getting backed on by the sun. With the chair and food I headed back to Craig’s car where he was setting up the laptop to live stream the Eurosport coverage of Le Mans. We settled down to watch the end of the exciting race to see a few more gather round his boot (trunk) and watch it with us. We saw the Porsche win the overall race with the Fords coming in 1st, 3rd and 4th in their GTE class. Exactly fifty years later they almost replicated their legendary 1,2,3 finish. What a result, well done to Ford. Craig packed away after the results and decided to check his battery as we had been running a few bits of the car for a while, nothing. The remaining power was just not enough to start it, so I wandered back to my car  which was only in the next field and got my jump starter. We connect up and fired her up straight away and let her run for a few minutes, all was good again in the Honda camp.

The end of the day was a great drive back, even with the UK Police force doing what they do best, hide in the laybys and side roads and wait for a speeding car while they eat their doughnuts, checking their speed guns. I’m sorry, but there are much more important things to do other than trying to catch people coming out of a car show doing thirty three miles an hour in thirty mile an hour zone. Pathetic people and quick way to make cash. Rant over, but it really gives me the hump to waste resources like that. Anyway great drive home with plenty of horns hooting to everybody, great atmosphere. I parked up back home it was time to get the tree sap off. Water wasn’t going to touch it, the car was still clean and I was spared the contents of the local bird population I was pleased to say. I wasn’t too sure what to use as I didn’t want to take previous wax layers off, as some cleaners will do. So I tried the Meguiar’s Ultimate Wash & Wax Anywhere (I will be reviewing it at some point), a waterless wash option. The spray was used on a small part of the roof to see if it worked on. The first application with the normal amount of spray removed most of the sap. I tried it again with a good soak all over and a gentle wipe this time. I was pleased to see that the sap came of no problem. The down side was I used a lot of the product to clean the car this time. Once I had cleaned the car I put her back into the garage and covered her up.

A good day all round 🙂

I'm just a man with a Classic 1966 Ford Mustang Coupe and an ever increasing collection of car detailing products to keep it clean. When I first started this blog this is what I wrote: "I had bought a project car that had been neglected, set fire to, rusted and abused. As a result of all that the car needed a bare metal strip down, a nut and bolt restoration." Four and a half years later the car was completed, on the road and shown at the UK's premier Classic Car Show, everything that was done to that car is documented here. I now have the privilege to drive one of America's most recognised cars and a true Icon, the Ford Mustang. I'm still sane after the blood, sweat and tears, so would I do it again? Oh yes!
View all posts by One man and his Mustang →
This entry was posted in Car Detailing, car shows, Photo's and tagged car show, Meguiar's, Mustang, police, tree sap, truck. Bookmark the permalink.

10 Responses to Cars On The Green