They say that buses don’t turn up and when they do there are two of them! I never really understood that as they should be on a time-table, but it does happen. Anyway the point is similar with me on the blog this weekend. I only posted a little quote in the last couple of weeks and this weekend I am posting twice with a full set of photos for work I have been doing on the car. OK so this post will not be as long as the last one but it here never the less.

Today was a day in the garage, I was going to finish up the hand brake cable on one side, so far the other brake has been restored yet. Then I was going to get in the engine bay and treat some light surface rust I had in there. I was on a roll and got to work the hand brake was dismantled again and some grease was applied to the parts that were metal touching metal. Although this sounds simple, it wasn’t as it required a certain technique, the car is on axle stands at the rear but not very high up. So as I needed to get to the back of the gear box effectively there is not much room to slide under the car. So the technique is lay sideways onto the car, turn the head sideways and shoulder shuffle untill the shoulders are under. Then bring the arms above the head then in the same manoeuver place the feet against the wall. Timing is now crucial, exhale and push with the feet while doing the shoulder shuffle thing. Once under, the tunnel provides a little welcome space and the rib cage is now able to move a few shallow inches at a time. Everything has to be to hand in order for this to work mind you. At this point I’m trusting those axle stands can really hold two tons as they say they can, if they fail, I am gonna get crushed ribs and all sorts of other unmentionable injuries, if I am not killed anyway that is. Getting out is a reverse shoulder shuffle out and slowly turning the body a few degrees so you exit sort of parallel to the car, those next few deep breaths feel so good. I do have bruises to prove that it was honestly that tight under there. It took me a while to get the hang of it, but I got it off to a fine art now. So the hand brake was in place it works (sort off) as the new parts are linked up to where they should be but not yet adjust correctly. Next job was the engine bay, I got my new stuff Rustbuster FE-123 that I am using to see what that is like. I am planning on doing a comparison test with the Granville Rust Cure and it’s all underway now being left to the elements as I type. Hopefully that will be a video review and then blogged later with my comments. The de-rusting painting was going well, the sun was out, the birds were singing and I was enjoying myself. A couple of kids went past on the their bikes and I watched them go past thinking nothing of it. A few minutes later they were back this time there were four of them, varying from eight to twelve I would say. They stopped in the road (it is a tiny little dead-end where our house is so they were safe enough) and looked at the car in the garage. The first one and the eldest said “Woaaah, Is that a Mustang? Yep it is”, the second said “Go and ask that bloke how much he wants to sell it for, and then tell your dad and he can buy it”. I was taken slightly aback as I didn’t reckon they would be able to pick out a classic Mustang from a done up Jap Ricer with a fake exhaust and a fluffy dice in the window! I was well chuffed.

The view they saw? 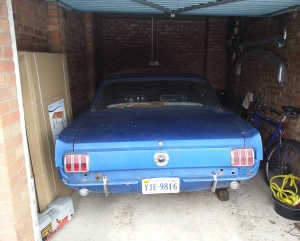 I have added a photo set of my Drive shaft removal and refitting with oil seal change or click here for the quick link. I am in the process of writing up the Rear Brake Drum refit Parts 1 & 2 as well. There are links to those pages from this photo set, but they are being updated over the next few days or so. I have been able to get a fair bit done on the car and taken plenty of pictures to so I can add them to the blog.

I'm just a man with a Classic 1966 Ford Mustang Coupe and an ever increasing collection of car detailing products to keep it clean. When I first started this blog this is what I wrote: "I had bought a project car that had been neglected, set fire to, rusted and abused. As a result of all that the car needed a bare metal strip down, a nut and bolt restoration." Four and a half years later the car was completed, on the road and shown at the UK's premier Classic Car Show, everything that was done to that car is documented here. I now have the privilege to drive one of America's most recognised cars and a true Icon, the Ford Mustang. I'm still sane after the blood, sweat and tears, so would I do it again? Oh yes!
View all posts by One man and his Mustang →
This entry was posted in Blog, Car, General, Photo's and tagged axle, drive, drive shaft, garage, half, half shaft, hand brake, oil seal, refitting, removal, repair, rust, Scott Drake, shaft. Bookmark the permalink.