This time of year is amazing for a few reasons, the first is the start of the warmer weather here in the UK, hopefully followed by a nice summer. The second is the Car Show season is underway as I mentioned before. The third reason is can’t wait for the Hay Fever to kick in and make me feel rubbish, joke! Still, I can’t think of anything nicer (car related), than driving to a classic car to show, parking her up and have people appreciate all your hard work. A sense of pride comes over every owner of their much-loved and cherished cars, that’s regardless of the car’s make, age or condition. But, there is one thing that worries me now and that’s security.

I have been talking to a couple of owners of some UK Ford owners at shows and the buzz word is “GPS”. No, I don’t mean the fact people use their SatNavs to get the shows, but more so what happens during and after the show. The very worrying story going around is that a particular car is target by organised gangs who are on the look out for quick sale car, or for some specific cars to be sold on as parts. Some of these car’s parts are worth more as “breaking” than the whole car to sell it complete, with the added risk of selling on an obviously stolen classic car. These top quality original parts are sold on to unsuspecting owners, not knowing that the parts they have bought have been stolen from such other classic cars.

How do they do it?

The answer is just to simple. These gangs are using small GPS tags and hiding them on your car during the show. Somebody could be talking to you while the other places the tag on the car without you knowing. When you leave the show they will track the GPS tag to the place where the car is kept. They then make plans on how to steal it at a later date.

There are some gadgets on the market that detect these sort of things by detecting transmissions of frequencies. They vary in price considerably and I bought one of the cheaper ones. Believe it or not it works! I was going to do a review of it, but not sure if it’s worth while as it’s so simple.

You turn it on and adjust the sensitivity and then wave it over your car. Yes you may look a little strange doing it. What I tend to do now is drive off and find a quiet place then pull over and check. This gadget is the size of a pack of ten cigarettes and has a long aerial to pull out for detection. The unit has a rechargeable battery inside that lasts for ages, wave it near your mobile phone and it has a melt down. There is another feature on the device to detect pin hole cameras by reflection using the red filter to look through. I’m not bothered with that to be honest. So now I carry one of these with me in the car now and check when I leave the show. Over kill? I suspect so, but to safe is better than sorry!

I’m waiting for the next car show and I had a little brain wave while in my garage. I was cleaning my toolbox while looking for things to do in the garage. When I decided to protect the paint! This toolbox was bought for me as Birthday present and Christmas together as they are pretty close together just after the wife bought the project car for me. The tool box was a second-hand purchase, in near mint condition. It was more than we wanted to pay, but it was worth it for the relatively small bargain amount. The guy wanted a very quick sale as he was moving and needed the money, I was just lucky to be looking on eBay at the right time when I saw it and “Buy it now” button was pressed. So just like my car this toolbox is very sentimental to me, almost as much as my car. At the end of the day, you get what you pay for and nobody can deny the Snap-On quality. 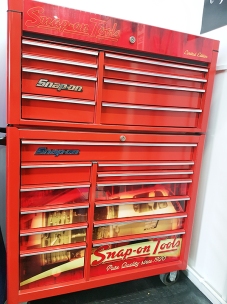 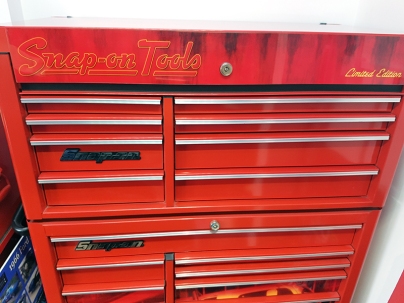 The tops of the draws are the areas I was thinking of, although I clean my tools before I put them away carefully, there may be times where I could chip the paint, as the marks show here from the previous owner when I got the box home. I knew they were there, they are tiny yes, but enough to worry me for accidental damage. 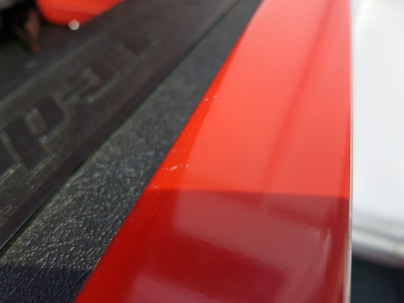 So what was the solution? Vinyl wrap. I looked around for some ideas and came up with Carbon Fibre. I worked out roughly how much I needed and ordered some quality wrap and not the cheap stuff. If I didn’t like it, I could remove it and it was going to be back to where it was. The ideal size was going to be five centimeters to allow the cover to the front, over the top of the draw and secure at the back. An old hardwood shelf made an ideal cutting top with a scalpel and a spirit level for a straight edge to cut the strips. 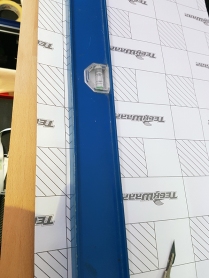 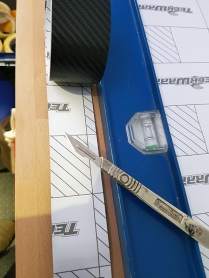 Degrease the draws with cleaners and allow to dry. Peel of the backing from the wrap and carefully to stick to the front of the draws on top of the chrome trim. Using a hairdryer heat up the wrap until it’s soft to allow you to bend the wrap smoothly over the angles and to make the glue more tacky. From the very front edge press the wrap down evenly to remove any wrinkles or air bubbles. Trim the ends up as you need to. 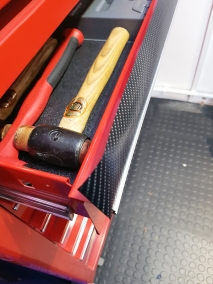 Then with the firmly down on top heat the back edge and repeat. 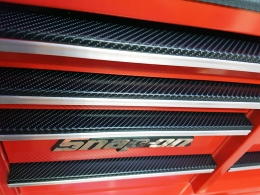 I am really pleased with the results and it doesn’t detract away from the Snap-On look. 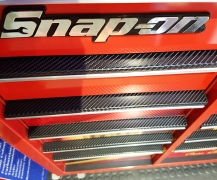 So the before and after? Good job or pimped it up to much. I could have used clear or a plain coloured wrap of course. But this was a little different. 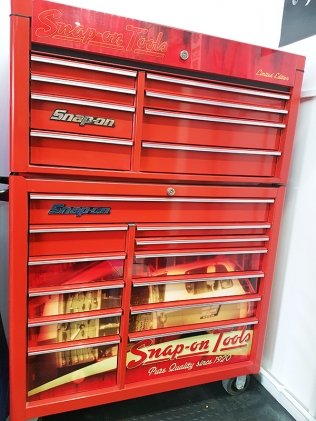 So back to securityagain. I have lots of it, including the very simple and brutal chaining of this tool box to the wall, brutal and simple. The other serious measures I have taken will give the game away, but the my car, garage and house are very well protected from low life scum bags who want to steal other people’s property and hard work. It’s not so much the money as it’s all well insured. It’s the fact that nobody can ever replace the sentimental value, or even come close to repaying my physical man hours to restore that car.

Am I just plain ol’ parnoid, or does anybody else have good tips to share with other classic car owners and readers? Are these stories I have been hearing scare tactics or the real deal? Please let me and everybody else know.

I'm just a man with a Classic 1966 Ford Mustang Coupe and an ever increasing collection of car detailing products to keep it clean. When I first started this blog this is what I wrote: "I had bought a project car that had been neglected, set fire to, rusted and abused. As a result of all that the car needed a bare metal strip down, a nut and bolt restoration." Four and a half years later the car was completed, on the road and shown at the UK's premier Classic Car Show, everything that was done to that car is documented here. I now have the privilege to drive one of America's most recognised cars and a true Icon, the Ford Mustang. I'm still sane after the blood, sweat and tears, so would I do it again? Oh yes!
View all posts by One man and his Mustang →
This entry was posted in Articles, Car, car shows and tagged GPS, Mustang, One man and his Mustang, security, Snap-On, toolbox. Bookmark the permalink.