At last this weekend things have gone a little better for me. The wife went out for the weekly shopping on Saturday and I was left on my own to get on with the car. I promised myself that I would start on the roof headliner areas, but the sun was out, all be it little cold. The car was pushed out of the garage enough for me to open the doors fully. Then a change of mind hit me and the headliner plans went up in the air. I decided to treat the floor pans. The carpet was pulled up, and the foot wells were cleaned out. The POR rust treatment was applied in its various stages and hopefully will be a first part of the whole floor pan to be treated. Now the foot wells should be rust treated and preventative at the same time. Sunday was again a nice but cool day so the second coat of POR15 was applied to the floor pans. As the drying was taking longer than I expected I didn’t get the chance to apply some POR Patch seal for the rougher edges of the welding. Next weekend I will and then start on the headliner unless I decided I will do the next floor section that is!

The six pack? No, it’s not a beer pack, case of wine or an abdomen wash board, it’s the pack of six POR15 118ml small tins that I used to treat the floor pans with. 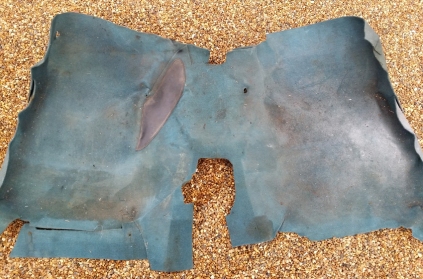 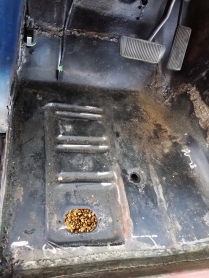 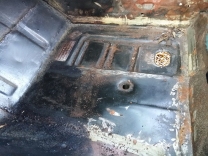 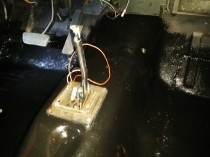 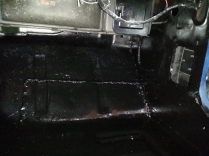 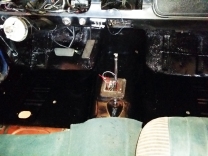 2 coats both sides and tunnel

I have created my review of the POR15 product and given a step by step guide of what I done this weekend with photo’s.

It has dawned on me that this time next week we will be in December and the Christmas holidays will be upon us sooner than we think. What made me think about Christmas this early? My wife, you can blame her for being organised as each year I get asked what I would like for Christmas, I supply a selection of items for online baskets at various places and she chooses a selection for me, from what ever she likes. That way I know I will be getting something I would like and the right version or style of it as well. A good example would be that there are so many cans of primer or similar out there, its a mine field to choose from let alone the wife trying to understand it all. The fact is pretty much everything I have made a list out for is Mustang related, funny that! Does anybody else have a similar arrangement or is it just me being a lucky boy?

I have added another little link on the sidebar of the blog, it’s a Dollar to Pound exchange rate link, you just put in the amount and it gives a current live exchange rate. Not just for the Dollars either, in fact most currencies. I use this site to give me an idea when ordering from abroad or the USA. It will need to be online for the rates but it loads up pretty quick and hardly any adverts on it either. Let me know what you think, is it worth being on there?

Just to be even more sad, I have added a countdown to Christmas. If I get enough grief for it I might take it down due to popular demand 🙂

I'm just a man with a Classic 1966 Ford Mustang Coupe and a collection of tools that just keeps getting bigger in order that I could do the job right. When I first started this blog this is what I wrote: "I had bought a project car, that had been neglected, set fire to, rusted and abused. As a result of that she needed a bare metal strip down, a nut and bolt restoration." Four and a half years later the car was completed, on the road and shown at the UK's premier Classic Car Show, everything that was done to that car is documented here. I now have the privilege to drive one of America's most recognised cars and a true Icon, the Ford Mustang. I'm still sane after the blood, sweat and tears, so would I do it again? Oh yes!
View all posts by One man and his Mustang →
This entry was posted in Car, Photo's, Reviews and tagged christmas, December, Mustang, por15, primer, review, rust. Bookmark the permalink.

8 Responses to My Six Pack