Stopping With The Times

First post of the year so I wish you a Happy New Year, also hoping that you had a great Christmas and well-earned break too. This year my wife and I decided to ask each other what we wanted for gifts and that we would stick to a reasonable agreed budget between us. The simple reason is that we have spent most of our cash trying to sort our house out and trying to pay some bills off for the materials we used. The wife’s list was around the usual girly pampering lotions and potions as expected. Mine revolves around the Mustang with its own lotions and potions for its pampering. My list only had a couple of bottles from Auto Finesse I wanted to try out, which I will review throughout the year with the other products I have to review, around twenty in fact that I haven’t as yet reviewed. To make up my options for the list I wanted to update the garage and a little gadget for the car, both of which she bought for me. 😀

As my Mustang just fits in the garage with about an inch at the front and just a few inches to the rear. I can park the car pretty well, but I am paranoid about hitting the back of the garage wall for obvious reasons. To try and protect the car from such an event the wall now has foam pipe lagging stuck on the wall with a large Snap On floor pad on top of that. To stop in the right place I normally rely on the good old-fashioned hanging ball to touch the windscreen and works perfectly every time, but it doesn’t look pretty.

I have been looking on-line for parking aids; tyre ramps, laser, twin lasers and ultrasonic variations. Lasers looked like to much of a hassle and didn’t give much of a visual aid. Tyre ramps would get in the way and could be moved when the car wasn’t on them, so that left ultrasonic. There are so many variables on the market, traffic light style or single red LED varieties. I liked the look of was the twin sensors and a box mounted at eye level that gave a count down to the final position. 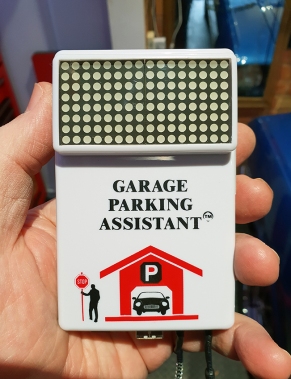 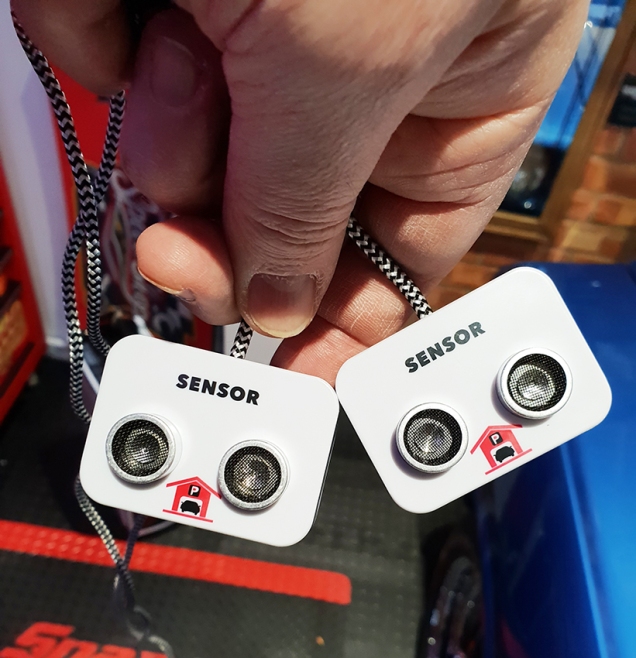 The set up needed a flat surface or bumper to work correctly. The mustang has very little in the way of a truly flat surfaces. The only relatively flat surface I could think of was the number plate. Some of the other sensor styles need a minimal distance of 12″ or so. This particular model needs a minimum of 6″ inches and takes the closest of the two readings. The sensors will activate when they detect movement and the count numbers display. So you park the car where you want and a number will be displayed. You then drive to that number and stop. Simple.

I made a few test locations and pushed the car out and back in again a few times. Each time the box did exactly what it was supposed to do, counted down. From the back of he car I pushed the car forward and stopped at the mark ’07’ (inches). Perfect. It doesn’t look neat at the moment as I want to make sure the positioning is correct before I tidy it up properly.

How close do I have to park to the wall? This close! 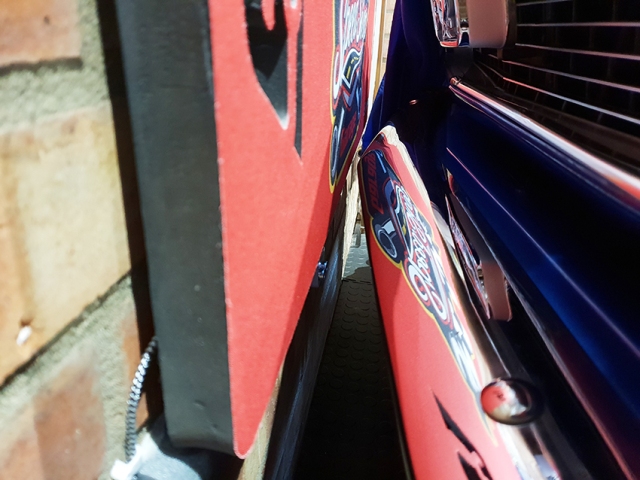 I have written a review of the product and installation here. Or it can be found under the Accessory menu.

Now my sense of direction is legendary, it’s so bad I get lost going home! Honestly it’s true. With that in mind, the other item I wanted was a something quite common in modern cars which is a bluetooth connection, but not that common on a classic Mustang. There are multiple ways around my little issue, a new technology radio made to look old – an expensive option. A new modern replacement radio that needs a hole cut into the dash – a lot of damage to the original dash, but can be cheaper. Or a halfway house that I have; an original Mustang radio adapted. My particular radio was sold to me as working when I bought it from the USA via Ebay. By the time I got the radio and was able to test the unit it certainly didn’t work anymore. 😠 Anyway, a contact of Mustang Maniac helped me out by connecting an input from a 3.5mm jack plug wire. This means that an ipod or phone needed a physical connection. It worked fine, but I wasn’t a lover of having a wire from the dash, blame my OCD for that. Then a friend of mine then told me about this gadget that connects a bluetooth dongle receiver and then inputs that signal into the radio, a similar setup to what I had, although he had a modern radio. This means that I could connect my phone for music, or more importantly, a Sat Nav turn by turn prompt. I already have a great Tom Tom Sat Nav which I could stick on the window, again my OCD didn’t like it and so I had it mounted on the centre console, the trouble with that is that I had to look down at it now and again as I couldn’t hear it over the engine noise, not exactly safe. With this new option I could have my radio on connected via bluetooth to my Samsung S9+ phone using Google Maps with voice turn by turn. The built in dash speaker is much louder than the Tom Tom unit so I would be able to hear what direction I needed to now. I could have speakers in the door, in the kick panels or in the rear parcel shelf. Again all of which my OCD won’t allow of course. Now I have a tiny receiver hidden in the glove box that just needs to be turned on and off I go. 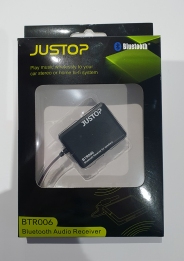 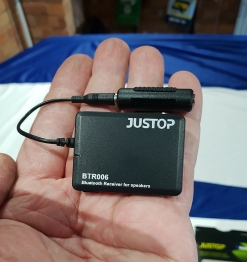 It works and I love it. I have also written a review of it here.

So my old school Mustang still looks stock, but now the media function has been upgraded into the modern world again. This latest upgrade goes with the other modern goodies like my LED lights front and rear, modern wire loom with blade fuses, electronic ignition, LED dash bulbs, voltmeter etc.

Any other good gadgets out there I need to know about? Please let me know. This List idea works great as you get what you want and not a pair socks to go in the draw with the rest. In fact I got a pair of socks as well – but they had the Shelby Logo on them so they are acceptable. 😀

I'm just a man with a Classic 1966 Ford Mustang Coupe and a collection of tools that just keeps getting bigger in order that I could do the job right. When I first started this blog this is what I wrote: "I had bought a project car, that had been neglected, set fire to, rusted and abused. As a result of that she needed a bare metal strip down, a nut and bolt restoration." Four and a half years later the car was completed, on the road and shown at the UK's premier Classic Car Show, everything that was done to that car is documented here. I now have the privilege to drive one of America's most recognised cars and a true Icon, the Ford Mustang. I'm still sane after the blood, sweat and tears, so would I do it again? Oh yes!
View all posts by One man and his Mustang →
Image | This entry was posted in Car Detailing, Driving my car, General, Projects, Reviews and tagged bluetooth, ford, LED, Mustang, Mustang Manaic, Onemanandhismustang, parking aid, satnav, Sensor, Snap-On. Bookmark the permalink.

12 Responses to Stopping With The Times