There is an age-old saying in the car scene, whether it’s custom build cars, restorations or just something to bling a car up a bit; ‘Chrome don’t get you home’. When I first bought my car I needed a one wire alternator to go with my American Autowire kit. So I bought a Tuff Stuff Chrome case version, It was a thing of beauty. (Note the box tag line!) 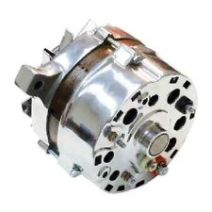 However after a year or so of being in the car without moving and outside, its beauty started peel off. The chrome started to pit and looked a bit rubbish, but you couldn’t really notice it. Then over the space of last year or so it just started to get worse, lifting the hood on my car at a show was now me hoping people wouldn’t look at the alternator. So I decided that for this year things were going to change.

I took the alternator out and decided it was going to get a freshen up. I couldn’t use ordinary spray paint unless I roughed up the chrome first with a little sand paper. As I didn’t know how this project was going to work, I decided on something a little different.

Rubber coating spray, the stuff you spray on and then can peel back of again. That was my plan so I bought a can of silver, I was looking to get more of an aluminium colour, however my choices were limited to fluorescent pink, yellow, orange, white, purple etc. That just wasn’t going to happen. I could have ordered some from the net in different colours of course, but I wanted to do it there and then as the weather was nice. So silver it was to be, it turned out to be an inspired choice. So I removed the front pulley section and masked up the holes in the alternator. I didn’t want the spray going inside to mess the components up. I masked up the centre part of the case with tape and carefully cut the tape with a fresh scalpel blade to fit inside the break all the way round the middle.

My problem was the rear with lots of holes, so how do I protect them? Then I had a mad moment looking through my tool box for ideas. I found a pack of Blu Tack, that was the cunning plan for the day.

I tore a chunk of and made it workable and picked of smaller parts to fit the holes. Making sure that I didn’t press it through the holes of course. I shaped the tack to the straight edges and curved areas using the back of my scalpel handle. I aimed to be on the limit of what I could get away with, some of the holes had parts just underneath so that was fine, just a small blob inside the holes that wouldn’t go over the chrome at the rear.

I took the masked up alternator out into the sun, no breeze and started to apply the first of six to eight coats that would be needed to make the paint thick enough to peel off, just in case I didn’t like it. Starting on the front and rear sections then the barrel around the sides.

The paint was quick drying and only took a minute or so to dry ready for touch. Standing on the spindle end and balanced I could turn the whole piece round to spray it up in layers at a time.

Yes I did get rubber coated silver nails from over spray, but it just rubbed it off when thick enough. Anyway, with the eight coats applied it dried soon enough to take back into the garage to remove the masking tape. 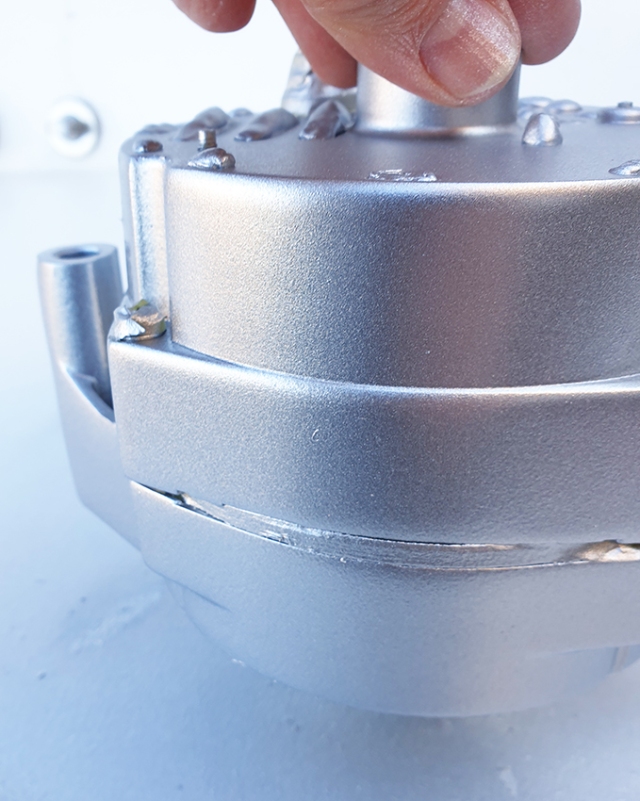 Laying on a nice clean microfibre I needed to create a clean edge. With another new scalpel blade I cut around the Blu Tack and tape very, very carefully and lifted out the tack and tape parts. If I had of just pulled the tack out it would have lifted the paint away from the chrome. I forgot to take pics of the back, but it all came out spot on, cutting the inside the holes and at a slight inward angle. This allowed the tack to come out leaving the rubberized paint coated right up to the wholes with no chrome showing.

I didn’t paint the pulley or the fan parts as they were in perfect condition, so I simply impact gunned them back onto the spline. 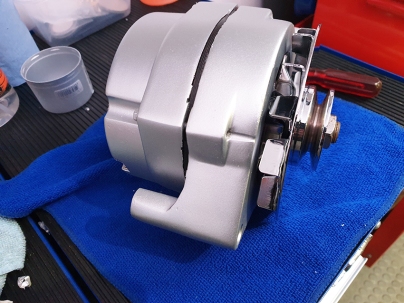 I was well chuffed with how it came out, it looked like the aluminium colour that I was after. The thickness of the coats filled the pits in the chrome and the tin of paint only cost me £12, with just under half still left.

I fitted the unit back into the car and wired it all back up. Overall now it’s in place it just looks right now. 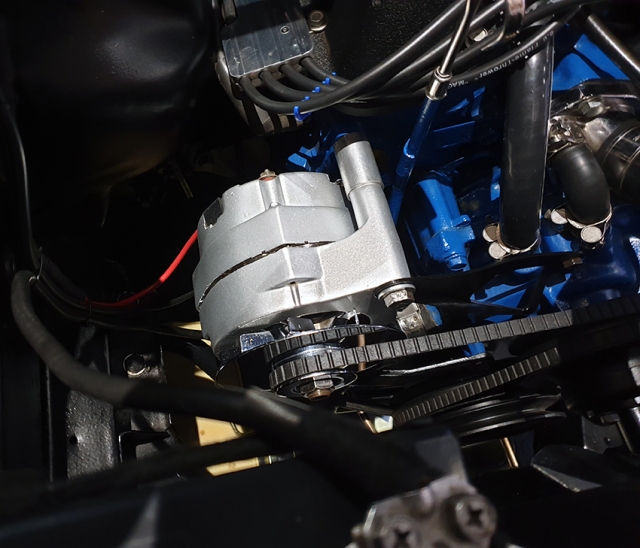 There is polished chrome at the front for a little bling, but not over the top. This pic below shows how close the paint is to natural spacer of aluminium; 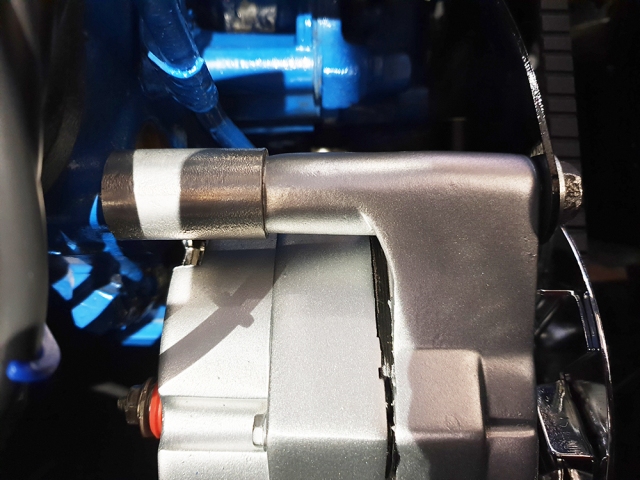 Not perfect, but close enough, I could even spray the spacer if I wanted to. I also love the slightly textured look too from the paint. 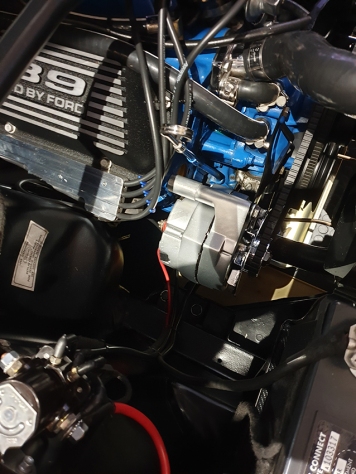 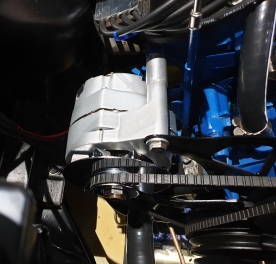 So it’s all fitted and like I say, very happy with the result. Masking up and cutting the masking tape back out from the paint and the tack was a pain, but worth the time and effort. Now I can lift the hood without worrying again.

I have been busy doing reviews of lots of car detailing and cleaning products. I have reviewed a couple of snow foam products. One from a well-known supplier and the other from a little known supplier. Looking at these can you tell which product is which? One slightly more expensive than the other.

I have been sceptical of snow foam for a while, it turns out snow foams are not all the same! I certainly looks like that have been using the wrong product in the past. On the same day I washed two cars with different snow foam products for a comparison between Auto Finesse Avalanche vs ValetPRO PH Neutral. Exactly the same settings on the snow foam lance were used, here are both those reviews;

There will be many more reviews added soon and the list under the ‘Car Detailing Reviews’ is getting bigger all the time – Remember these are all bought with my own hard-earned money so the reviews are completely independent.

Roll on the show season, I don’t want to keep taking bits of my car, just because I can!

I'm just a man with a Classic 1966 Ford Mustang Coupe and an ever increasing collection of car detailing products to keep it clean. When I first started this blog this is what I wrote: "I had bought a project car that had been neglected, set fire to, rusted and abused. As a result of all that the car needed a bare metal strip down, a nut and bolt restoration." Four and a half years later the car was completed, on the road and shown at the UK's premier Classic Car Show, everything that was done to that car is documented here. I now have the privilege to drive one of America's most recognised cars and a true Icon, the Ford Mustang. I'm still sane after the blood, sweat and tears, so would I do it again? Oh yes!
View all posts by One man and his Mustang →
This entry was posted in car shows, Projects, Reviews and tagged 1 wire alternator, Auto Finesse, Auto Finesse Avalanche, Chrome don't get you home, independent reviews, One man and his Mustang, rubberised paint, Snow foam, Tuff Stuff, ValetPro, ValetPRO PH Neutral Snow Foam. Bookmark the permalink.