Weekend just gone I attended the Stowmarket Carnival which was held over two days with a classic car section on Sunday. The general public was let in from eleven onwards, but the cars had to be in before nine thirty, although they were still being let in at ten thirty. So, I decided to take my photos sooner than later without too many people around, and before more cars arrived. A nice mix of cars and some top quality restorations on show. It was one of the first days this year I could get my show board out without the wind and rain because the sun was out all day, I even had to apply sun cream, twice! There were stalls, a dog shows, live singing, and a fun fair too. 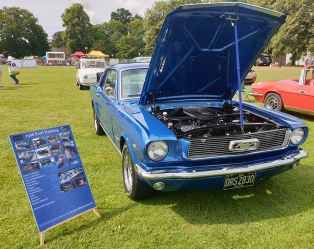 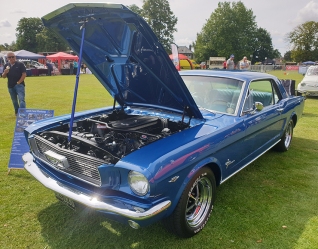 I follow on Instagram a group of ladies called ‘_modifiedgirls’ and they also have a website called ‘https://modifiedgirls.co.uk/&#8217; I mentioned this because I see a FTO being lovingly cleaned by a couple of ladies. Without trying to appear anything other than a genuine car fan I got talking to Tara Ashton who confirmed that she was a member of the Modified Girls scene. We had a chat about cars and I have to say that these ladies do know their stuff. I also think it’s fantastic to see members of the fairer sex enjoying the car show scene along with the guys. Here is her FTO she rocked up in to the show. I said I would give her a shout out on my blog, consider it done.

This Mk1 Ford Escort GT was a preproduction model and was used by the media to review the car. A nice example with some serious provenance.

There was mixture of a few hot rods, kit cars, more modern cars and some restorations to wonderful standards. Did you know the Fiat 500 number was the engine size in CCs? That’s 500 cc’s or half a litre, for our US friends that’s 30.5Ci  Abarth gave the engine a stage 1 modification up to 595cc (36.3Ci) which made 31bhp. 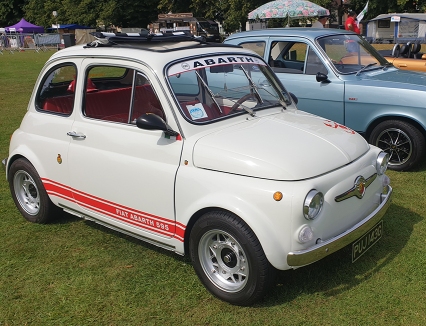 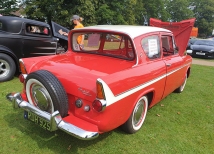 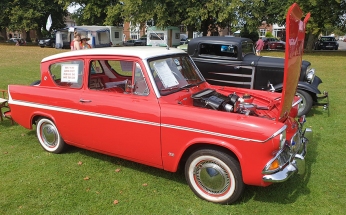 Triumph models were varied, Stag, TR6, Dolomite, Spitfire. I almost bought a Stag when I was looking for a classic car, but when I saw the Mustang, my mind was made up. But I still like the look of those stags. 🙂 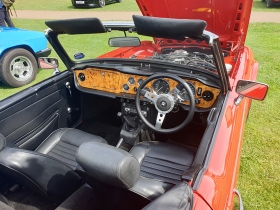 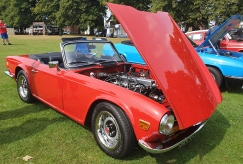 Some of the other cars that took my attention, I didn’t bother with the Nissan Skylines, as for the Golf GTI’s, Jags, Vauxhall Corsa etc, I could have gone down the road to the Asda car park and seen as many as I wanted. Is that a harsh thing to say? 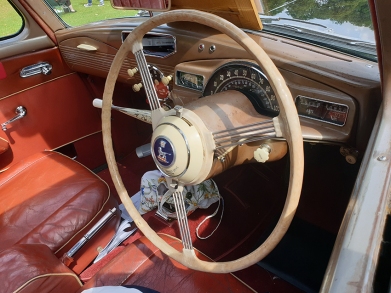 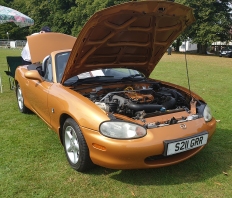 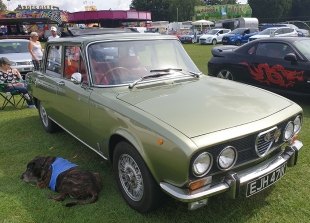 From the heading I mentioned wings as well as the wheels. The Saturday they had a fly by of a Spitfire (the classic WW2 plane – not the car being propelled through the air). On Sunday we were treated to a WW2 Lancaster Bomber. If I had of known I would have taken a proper camera not just a cell phone. But I tried my best to capture this incredible plane that did three low(ish) fly overs.

I turned this into a black and white picture, I think it works better than the colour pics. I took a video of he final fly over, the trouble is you just get to hear the fabulous noise.

I took this video of the last fly over, the trouble is that the video didn’t pick up the incredible sound the plane made. 😦

To finish the post I must be going soft in the head or getting sentimental in my old age. I had a guy Andrew who loved my car and was looking all over it. He made a good presentation to me on why he should sit in my car. I let him sit in it after emptying his pockets of keys etc. so as to not to damage the upholstery, I even took a picture of him in my car, just because I said I would. Consider that done as well. 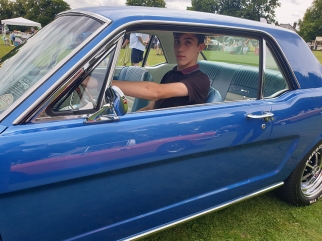 It was a hot day, but I’m not complaining about the weather for a change. 😀 I spoke to lots of people and had a great day. More of the same next time I hope.

I'm just a man with a Classic 1966 Ford Mustang Coupe and an ever increasing collection of car detailing products to keep it clean. When I first started this blog this is what I wrote: "I had bought a project car that had been neglected, set fire to, rusted and abused. As a result of all that the car needed a bare metal strip down, a nut and bolt restoration." Four and a half years later the car was completed, on the road and shown at the UK's premier Classic Car Show, everything that was done to that car is documented here. I now have the privilege to drive one of America's most recognised cars and a true Icon, the Ford Mustang. I'm still sane after the blood, sweat and tears, so would I do it again? Oh yes!
View all posts by One man and his Mustang →
Video | This entry was posted in Blog, car shows, Photo's, Videos and tagged Abarth, car show, dog show, Fiat Abarth, ford, FTO, hot rod, Instagram, Lancaster Bomber, Modified Girls, Mustang, One man and his Mustang, restoration, Stowmarket Carnival 2019, Triumph Stag, v8. Bookmark the permalink.