The weekend took an age to arrive be fore I could get down to Mustang Maniac. I have been kept up to date with the progress of my car via teaser emails from John. The car is now in a very strong position to be taken from the supporting jig and mounted onto the transporting dolly or trolley, a big moment for my car. This also frees up the panel shop and the jig for the next little lady who needs it. Now maneuverable, the car can be moved around as required, especially important when she comes to be being painted of course.

On a personal note this was a huge milestone for me as it seems to be less of a permanent fixture in the workshop and shows that the work so far is at an acceptable standard to move onto the next stage.

The car had the fenders attached and aligned up to the doors and the hood. The story as you are well aware by now is to strip down the panel(s) to see what lies beneath the paint and then make a decision on what needs to be done. 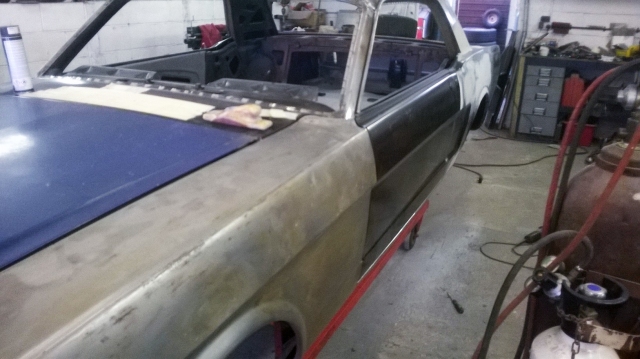 Last week I stripped down both fenders, things were looking pretty good. The left hand side fender was inspected for the filler prep the few dents were not to bad to look at, but the metal had stretched to a point that it would pop in and out just above the wheel arch with the filler removed, the same scenario as the left hand side door. So the the decision was to replace the wing unfortunately. The amount of filler and man hours to repair the fender was possible, but the man hours to make it paint ready was not going to be viable and the results could be questionable after paint. But, on the positive side this new fender will last the test of time. The new left fender fitting was good apart from the back sculpture of the fender to the door where the gap was a little out, so the MM boys being perfectionists that they are, made a little cutting and fabrication along a little metal work magic from Terry who gently refabricated the correct shape for the door – fender gap. 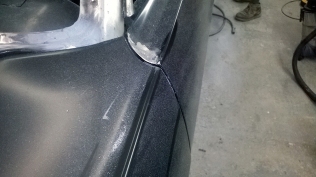 Terry made the repair to the bottom of the right side fender and welded the freshly fabricated new section as the bottom was a little peppered with rust holes. The repair was ground down and a light filler applied to protect the join. The headlight recess was repaired to make the rusted out odd shaped cable hole circular again via a new drilled out plate that was welded in its place.

The rear quarters were leaded up and rubbed down properly. The rusted parts of the windscreen were repaired with new lead work as the original lead had cracked. More of the same lead and ground out rust parts along the lower water channels to the windows frame at the rear. Once the lead had been rubbed down a final top coat of filler was applied. 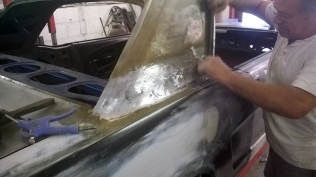 With all the panels aligned and fitted the next job was the look and especially the feel of the panels, any minor imperfections were not going to be acceptable by the guys as it would show in the paint, so a little filler would be required which we knew would be the case. The leaded and brazed areas were now given a coating of filler and Terry worked to fill, rub down, add more filler and build it all up again in order to meet their high standards. A spray of dye coat or guide coat, was then applied to the first batch of filler. Later on this would be rubbed down to 500g ready for the fine paint prep work to begin. 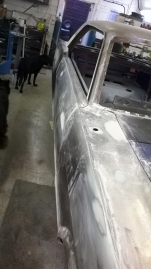 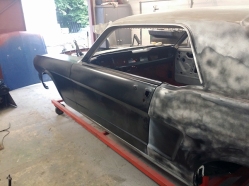 Yogi started some filler on the top of the right fender where there were a few minor dents, I was given another master class on smooth filling and rubbing down with the aid of dye coat. It’s really annoying when these guys make it look so easy. The filler was applied so smoothly the amount of waste and rubbing down was minimal. Yogi did get a bit dusty, for which I received some grief I might add, all because it was a Saturday! Sorry Yogi, but it was funny! 🙂

Once I had seen enough to realise that the pecking order had been reasserted when it came to filler work I got on with my job, to remove the last persons efforts of filler work on the hood and see what lies waiting for me under the red oxide primer. The hood was placed on their panel work frame ready to start work as I put on my gloves. I wanted to start on the leading edge of the hood where all the primer was, if it was beyond repair it would be here was it filler or holes? I was about to find out.

As more paint came off and there was only a little filler that was found, the smile on my face got bigger. That was only half the story as the underside could be a big issue. The underside was unbelievably hard to get off, the heat of the engine maybe I don’t know but I was going through stripper like you wouldn’t believe. At 6pm Adam came to see how I was doing and helped me get the last bits of paint off. All was good, except for my back which was killing me. 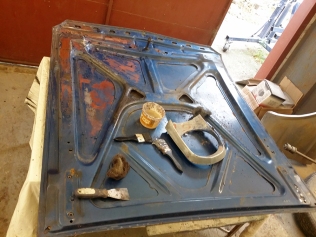 start at the front underside

We flipped the  hood over and the surface had started to get a little surface rust very quickly, so we went back at the surface again with wire wool and washed it all down with a good dose of thinners and a light coating of WD40, just for now. If you look closely at the front edge just to the right of the sculpt line there is a dent, this just happens to be the size of a palm print, common when the hood gets shut apparently over the course of time. But in general I am pleased to say the hood is in good shape. it will need some mastic to bond the frame and the skin together on the underside, but that wont take to long. Chris was back with me for a little while who kindly cleaned up the headlight doors which were in a good condition, so I was happy with that. Thanks to Adam, Yogi and Chris who all helped me out today. 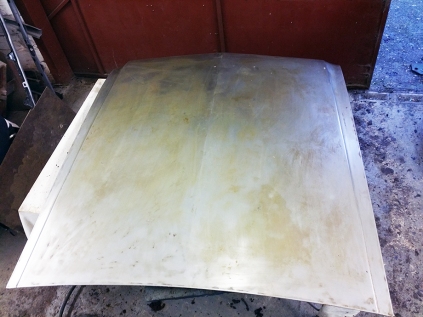 The last couple of bits they had done was the dash and door. As the dash will fit the ’64 – ’66 Mustangs the gauge recess was generic. But, for the five gauge GT dash from ’65 (as an option) to ’66 it would not fit so the small cut out was made to accommodate the larger speedo. I have circled it so you can see it a bit clearer.

The right hand door was lightly shot blasted back to bare metal in order for the light contours around the door cards to be painted properly. 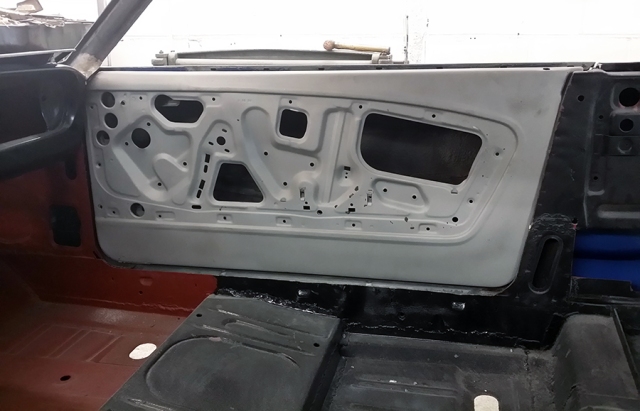 Sunday was a day of dusting things off, degreasing the metalwork that had been stored in the man cave and spraying them in them in red oxide, over the top of the anti-rust paint of course. These bumper irons will match the chassis when they are bolted into place.

Yes it’s another big post, but a lot happens in a few days when the MM guys get going. Once the car gets to paint then things may slow down a little and mechanical things will need to be done! quite what that will be I will wait and see.

McVitie’s Jaffa Cakes and Hob Nob biscuits are a popular choice with the guys, so I am looking for sponsorship from McVitie’s as they go through the stash of supplies I take down every weekend! How much are the McVitie’s shares???

I'm just a man with a Classic 1966 Ford Mustang Coupe and an ever increasing collection of car detailing products to keep it clean. When I first started this blog this is what I wrote: "I had bought a project car that had been neglected, set fire to, rusted and abused. As a result of all that the car needed a bare metal strip down, a nut and bolt restoration." Four and a half years later the car was completed, on the road and shown at the UK's premier Classic Car Show, everything that was done to that car is documented here. I now have the privilege to drive one of America's most recognised cars and a true Icon, the Ford Mustang. I'm still sane after the blood, sweat and tears, so would I do it again? Oh yes!
View all posts by One man and his Mustang →
This entry was posted in Car, General, Photo's and tagged bumpers, dolly, fender, filler, headlight, Hob Nobs, hood, Jaffa Cakes, jig, lead, man cave, McVitie's, McVitie's biscuits, Mustang, One man and his Mustang, paint, quarter panels, rust, Sanding, shot blasting, welding, Yogi. Bookmark the permalink.